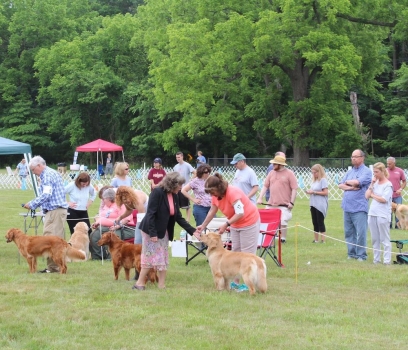 Match shows, like this one in 2017, are increasingly rare.

Perhaps the Biblical message originating with Matthew 20, verses 29-34 – “Can’t see the forest for the trees” – aptly describes our current dilemma regarding judges being overburdened by special attractions that cause dog shows to go on seemingly forever. Yet the decision to add such events truly helps prime the pump for entries.

What that message means is we can’t always see what’s right in front of us and obvious because so many things crowd it out. People can’t see the situation they’re in as it actually is because they’re so bogged down in details, they lose perspective on the big issue.

Could this be a description of yet another AKC proposal that would have reduced regular judges’ numbers to 150 dogs per day so they can be utilized for numerous special attractions? Have we forgotten that the breed ring is where the evaluation and comparison of breeding stock takes place? Are we willing to sacrifice our most experienced judges’ time from the breed ring in order for them to pick all the “bests” associated with special attractions? Although word has reached me that this latest proposal has been dropped, it means the “powers that be” are aware of the discontent in the fancy with the existing situation. Hopefully this awareness will lead to some positive changes as soon as possible.

Perhaps we have forgotten the vital role that matches and sweepstakes once played in the education of puppies, young dogs, new exhibitors and aspiring judges. Decades ago in my youth, I judged an early match for the Salisbury (Maryland) Kennel Club before it became a recognized club. From the 100 or so dogs on the day, my final choice for BIM was a brindle Great Dane bitch who later finished her title in the best of competition. What a great learning experience for a young breeder!

Two years later, when I moved to California, my friend Dick Beauchamp asked me to judge sweepstakes at a Southern California Cocker Spaniel specialty show with about 30 puppies and more than 100 in the regular classes. We had been friendly competitors in the world of Parti-colored Cockers prior to the move from the East.

Soon I judged matches in Northern California and huge ones at the City of Angels Charity matches in Los Angeles. I learned to look at the ring for the best use of it, mark judging sheets, and become comfortable with helping exhibitors and sorting out their stock. Although I never planned to become an AKC-approved judge until my marriage to Chuck Trotter in 1994, I would have loved to be asked to judge Best Bred-by Exhibitor anytime.

Are we overlooking the potential of truly knowledgeable dog men and women who have tremendous knowledge from hands-on experience they could share? People who don’t wish to go through the rigmarole of applying to judge? At a recent Northern California show such a person unknowingly helped spark me to write this article. Jeff Heim has been a huge force in Bay Area dog shows for decades – as a handler, club official, show chairperson and just a truly good dog man who gets it. He has handled top dogs across the groups. When I asked him why he hadn’t applied to judge, he replied he thought it was too late to go through the drills. Furthermore, keep in mind many folks just don’t want to fly all the time. Yet I know that those of us who know Jeff greatly appreciate his opinion of our stock. After all, he was always at each show early and didn’t leave until it was over. And still is!

Our sport has so many people across the country who are truly knowledgeable dog men and women not being utilized. Such people (breeders, exhibitors, handlers and ring stewards) are treasures we need to use. They could officiate the special attractions and also get experience with hands-on activities on large numbers of dogs in case they someday want to apply. The NOHS exhibitors would benefit by having that many more opinions. Some of them have told me they are tired of “cookie cutter” judging because it is not healthy for the sport. New faces in the rings might remedy problems we haven’t considered.

Due to the unbelievable proliferation of point shows in recent years, matches and other valuable “hands on” experiences have been greatly reduced and even eliminated. Perhaps we have unknowingly shut the door to using some of our best dog people to become part of our evaluation process. An alternative way to get more people involved should be considered. Someone who judges just a breed or two might be more than willing to judge special attractions. Handlers who finished early in the day could also lend their services, as they would be accumulating credentials for later careers. Professional handlers once agreed to judge juniors and also were approved to judge specialty shows.

A potential category for “volunteer judges” to adjudicate special attractions would solve many of the problems that currently exist: dog shows going on forever, exhibitors seeing the same judge at different levels in regular breed judging and special-attraction judging on a weekend, etc. Small clubs could really benefit from those volunteer dog men and women, and it could open the door to protecting our sport from much that currently threatens it. NOHS exhibitors as well as the professionals and judges are interested in reducing “wait time,” as a regular group is often held up when its regular judge is in the NOHS group. The Volunteer Judges Program would reduce these problems because approved judges would not be caught belonging in two rings at the same time.

Dog shows that last too long could also be aided by such a program. Kudos to the San Joaquin Kennel Club and others that do the same: that is, trying to give judges the groups where they have done the breeds, thus reducing the time it takes for each group.

In a perfect world, “Volunteer Judges” would meet certain criteria that would provide simple paperwork (that could even be done on the day of the show) and at the same time prove one is a real dog person! After all, if you can read, you can pass breed judging tests for regular judges’ approval as currently administered, except when there are occasional unintentional trick questions.

The opportunity for young professionals to accumulate credentials would enable them later to advance through the process of becoming approved AKC judges in a more orderly and speedy fashion. It is in our best interest as a sport not to squander our assets. That is just common sense. Now, more than ever, we need to utilize all of our gifted dog people.

© Dog News. This article may not be reposted, reprinted, rewritten, excerpted or otherwise duplicated in any medium without the express written permission of the publisher.
Sat, 08/27/2022 - 7:20pm