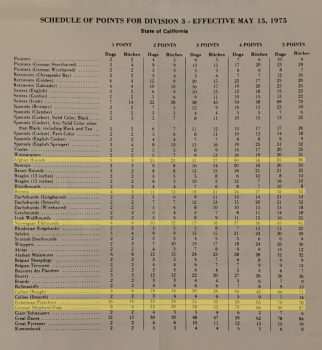 Flashback to the Glory Days

It is amazing the things you find when you are stuck at home with ample time to begin processing your belongings accumulated for decades. My trip through my files was a flashback to what many consider the “glory days” of California dog shows – the 1970s.

Perhaps the most mind-boggling discovery I made was in the November 9, 1975 Mensona Kennel Club catalog, where on the first page the “Schedule of Points for Division 3 (State of California)” was published.

In those days my breed (the Norwegian Elkhound) had wonderful entries, as did many breeds when compared to today. For example, 85 Afghan Hound class dogs and 86 bitches were required for five points in Afghans. Believe it or not, Elkhounds required 45 class dogs and 41 class bitches for five points. No wonder many of us still consider those fantastic years among the best of our lives. 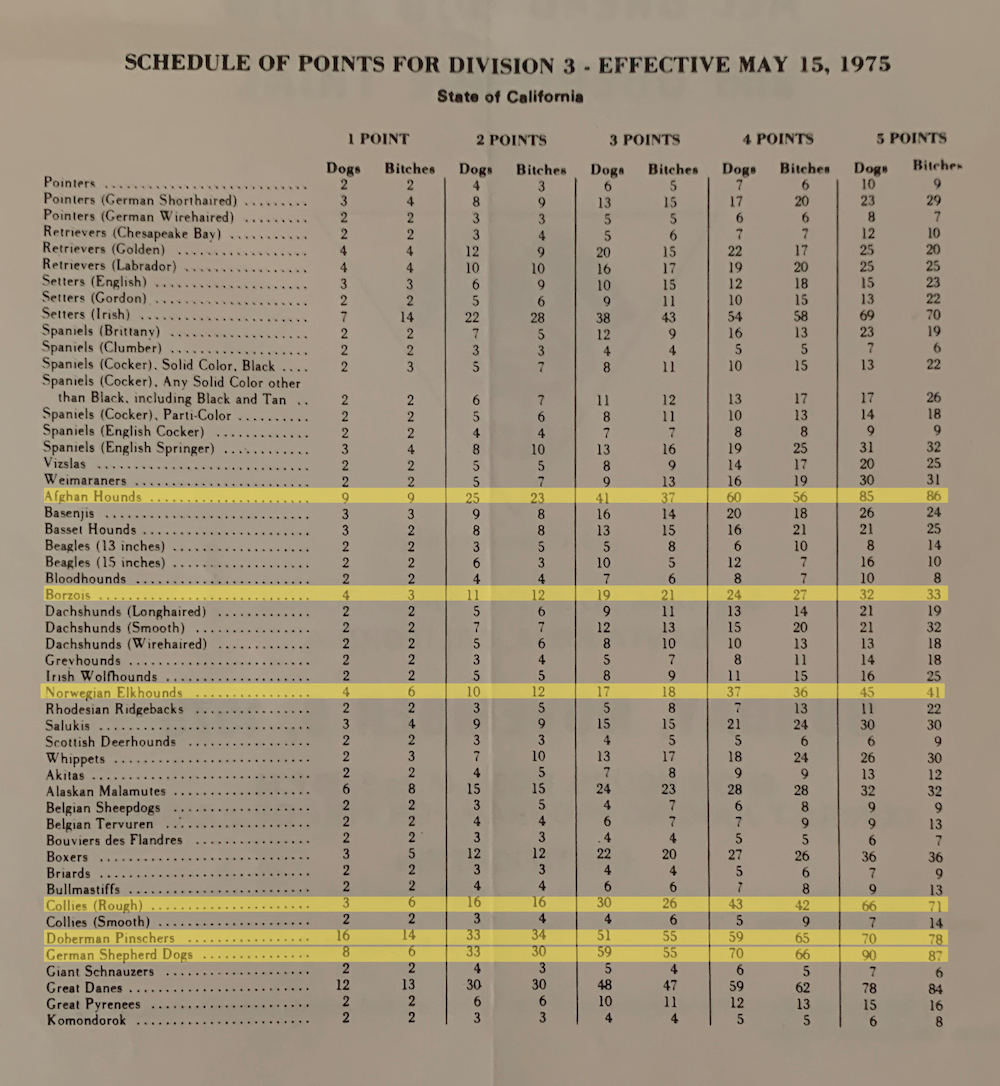 The illustration from page 2 with the point schedule in the 1975 Mensona catalog shows Sporting, Hounds and some of the Working breeds, while the other groups were on the next page. Bear in mind that breeds not listed were all grouped at the end with the same point schedule. And of course about 70 breeds were not yet part of AKC. Furthermore, the Working Group was not split until the late ’80s, when many breeds were moved from there to the new Herding Group. 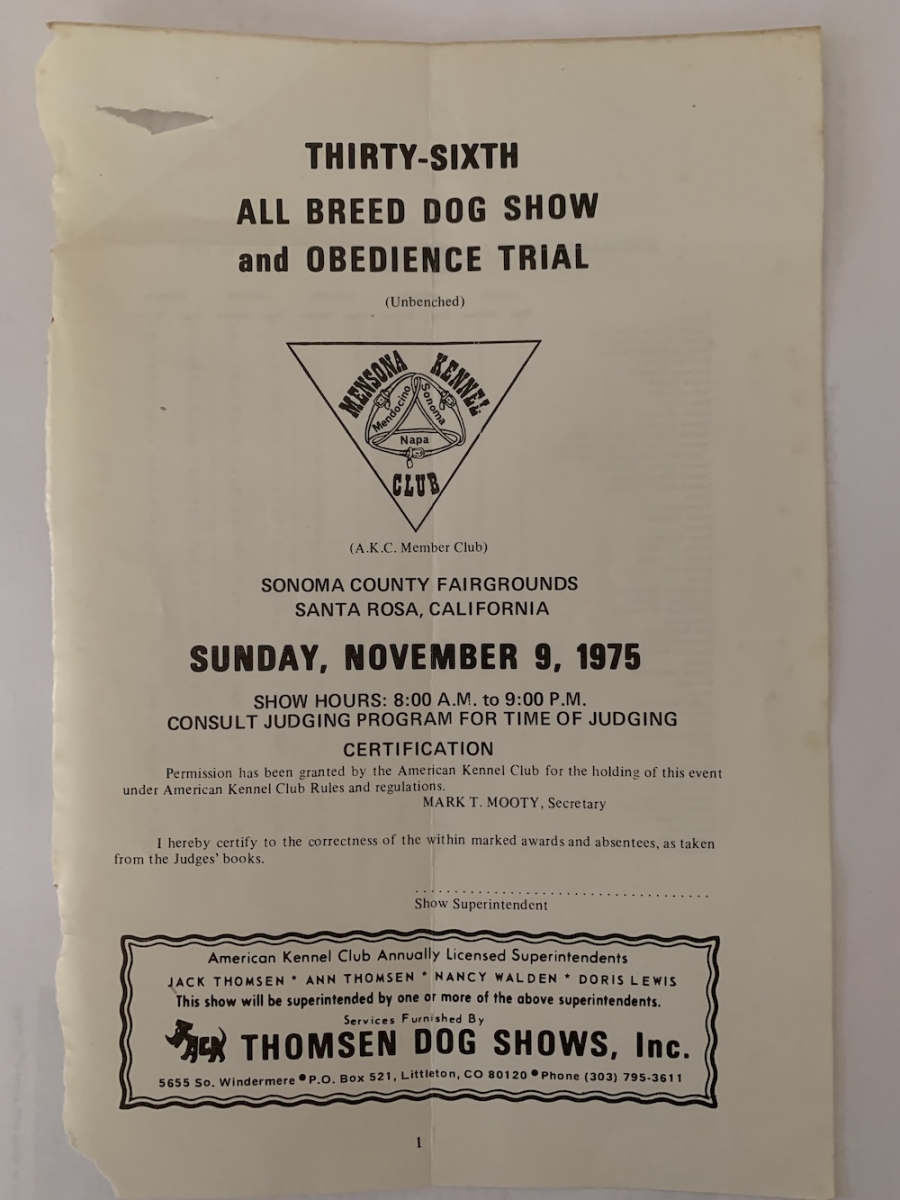 This competitive situation raised the bar for all, and quality abounded in many breeds. I remember one Open Dog class in Elkhounds where three eventual BIS winners competed just for the points! And many breeds such as Afghans, Borzois, Rough Collies, Doberman Pinschers and German Shepherds, to name a few, also had multiple future stars in the classes competing for majors. Even outstanding dogs might take numerous shows with majors to finish because there were so many quality dogs in competition.

The typical California dog show of the ’70s with around 2,000 dogs was a textbook classroom environment for the true student of dogs. Because Elkhounds, like Bulldogs, were usually judged at 8 a.m., much time was spent by me during the rest of the day studying other breeds and those master judges evaluating them.

Santa Barbara weekend was often like a crash course in learning, offering “Conversations with the Clarks” as Mr. and Mrs. James Edward Clark drew a mesmerized evening crowd to share their experiences and wisdom in all things related to bettering purebred dogs. With thousands of dogs (sometimes 4,000) to study during the day and numerous breed experts at ringside to share knowledge, students of dogs continually enriched themselves over that splendid weekend.

I will always treasure the Santa Barbara ringside mentoring provided by Richard Souza of Coastwind Afghan fame, for example. It was our annual get-together with more than 100 Afghans to appreciate. Richard’s wise words about the Eastern look, aristocratic carriage, defined hip bones and appreciation of patterned exhibits still resonate with me.

Such learning experiences of yesteryear not only took place at dog shows but at the homes of breeders as well as in your own home. Gatherings to grade litters by Norman Austin in both Cocker Spaniels and Elkhounds, Johnny Davis in Doberman Pinschers and Knox Buchanan with Dachshunds were appreciated by fanciers as both a learning experience and social gathering. In those days, books by breed experts on their breed were treasures to be read and re-read as one’s dog library augmented one’s growth in dogs. Herman Cox on Dachshunds, John Wagner on Boxers, Captain Graham on Irish Wolfhounds, Vincent Perry on Boston Terriers and John Marvin on Terriers and other such respected authorities were among our heroes whose works even the American Kennel Club valued. For in those days, applicants to judge could list such resources as part of their preparation to judge on their forms when they applied.

And of course many of our greatest shows were benched, allowing breeders to interact socially and evaluate all the dogs away from the spirited competition of the actual ring. When one of my quality bitches went BOS to another special, I was most disappointed. Back at the bench I studied the winner and realized his substance and headpiece were something my lines very much needed. My resulting use of him as a sire contributed much-needed strengths to my lines. Such shows as Beverly Hills, Pasadena, Silver Bay, Oakland and others represented bench shows where aficionados could study dogs. Only the Golden Gate Kennel Club keeps this marvelous tradition alive today in the Golden State. It appeals to the public and entices prospective fanciers into our sport while exhibitors also benefit.

Today’s fast-forward world with insufficient time to interact with breeders and their dogs concentrates on electronic learning from a screen. This tool is worthy and contributes to the learning process, especially so when augmented by hands-on experiences. Exactly how many breeders who do not yearn to judge utilize these programs is anybody’s guess. However, my personal experience convinces me that when breeds are contested with large and exciting entries, all breeders benefit from it. Humongous Open classes are seldom seen in modern American shows with the exception of national specialties, yet in the “good old days” it was routine to see 25 or so entrants in just the Open classes.

In such quality entries only a few will win, and many who do not are less disappointed than usual because they have plenty of company. Furthermore, this scenario stimulated breeders to work harder to produce better dogs. The competitive climate seems to produce better sportsmen as well as better dogs. Raising the bar seems to encourage winners to be more gracious and losers more accepting. Large quality entries work for the good of the order.

The last 30 years has seen an exponential explosion of dog shows, resulting in many shows with lower entries as the numbers of available shows reduces the number of dogs present for each average show. Yet when fewer shows are available, numbers spike. The August 2020 Canfield shows profiled nearly 4,000 dogs as proof of that point. The question arises: Do we desire more shows with thinner entries in preference to fewer shows with larger entries?

Nonetheless, dog shows remain an opportunity for continuing education for each individual who attends with a thirst for knowledge, no matter how many years one has been in the sport. In the immortal words of basketball’s greatest collegiate coach, the late John Wooden: “It’s what you learn after you know it all that counts.”

While walking my dogs around the Monterey Peninsula during this time of social distancing, my attention has often strayed to the hordes of sea gulls that live here. With their aeronautical features, they fly fearlessly overhead into the wind without a thought. Their feathers remain clean and their well-fed bodies strong. And of course they are untroubled by troubling times. In the words of Richard Bach’s Jonathon Livingston Seagull, “Here’s the test to find whether your mission on Earth is finished: If you’re alive, it isn’t.”

This writer truly takes that advice seriously, continuing to utilize my personal library and other resources in an attempt to expand my knowledge as the years go on.

© Dog News. This article may not be reposted, reprinted, rewritten, excerpted or otherwise duplicated in any medium without the express written permission of the publisher.
Thu, 08/13/2020 - 10:30am