Ch. Milson O'Boy with his handler Harry Hartnett goes Best in Show at the 1935 Morris & Essex Kennel Club. Pictured with the trophy is show chair and heiress Geraldine Rockefeller Dodge.

Looking back at an Irish Setter of renown
By
Pat Trotter

With all the terrible losses resulting from this horrific virus, one has to look at the small amount of good that could come out of it. Getting some things done that have been put aside for years qualifies.

Cleaning out files and reviewing the hundreds of books in my personal library as well as talking to some longtime friends fit that description of good. The rediscovery of the book "O’Boy!" written by Dr. Jay Calhoun and published in 1964 led to just one more fascinating re-read of this little jewel. For it is the story of a captivating Irish Setter of the 1930s and his eventual show career under the ownership of Mrs. Cheever Porter of New York City. Both the name of the dog and the name of the owner were to become immortalized in dog-show history!

Under the guidance of Harry Hartnett, called the “Maestro of Milson” by Calhoun, Ch. Milson O’Boy enjoyed one of the greatest of show careers in American dog-show history, with wins from the puppy class at Westminster and Morris & Essex to finish his championship. As the youngster started to mature, he caught the interest of Mrs. Porter, who owned his grandsire Ch. St. Cloud’s Fermanagh III. This grand lady was a connoisseur of both dogs and horses, and saw the same qualities in the young O’Boy she had appreciated in his grandsire: type, balance, elegant head, excellent shoulders and correct depth of chest, all covered by the coveted shiny red coat.

Ready to start a serious campaign in 1935, the youngster was still under two years of age when he won the breed and placed third in the strongest of gun dog groups at the Garden. Yet the best was still ahead: He was named Best American Bred in Show later that night at Westminster! It was in the day when the imported dogs from Europe dominated group and BIS honors in the United States, leading to the creation of this category that inspired American breeders to excel at the top.

And what could be more magnificent than the glory of Morris & Essex at the famous Giralda Farms in New Jersey in May? With its spacious, manicured, emerald lawns profiling 50 large judging rings for prominent breed experts from all over the world to adjudicate their breed, Mrs. Geraldine Rockefeller Dodge had created the ultimate dog show. Huge tents covered the grounds that maintenance crews worked on all year in preparation for this one special show.

People from all walks of life, from socialites to America’s middle-class dog lovers, flocked to the show in the thousands. Dr. Calhoun himself displayed his generosity of heart when he related the story of an elderly lady walking toward the show with her small terrier tucked under her arm. Needless to say, the good doctor picked the pair up and drove them the rest of the way.

﻿When the glorious red Irish bested the other 120 Irish Setters at Morris & Essex in 1935, there was thunderous applause for this dog who had become the darling of American fanciers as a true homebred flying the colors for all American dogs. All those years ago the Sporting dogs were always very competitive as many gun dog people actually hunted with their dogs as well as enjoying the spirited competition of the dog show. (Westminster itself started out as a sporting gentlemen’s club dedicated to the sport of game-bird hunting, and to this day the Pointer remains the symbol of that original devotion to Sporting dogs. Breeds in the group were both strong and deep.)

Hartnett was one of those passionate breeders who conditioned his dogs to the nth degree, and groomed and handled them to perfection. He and O'Boy were up to taking on the best of the best in that strong group at Morris & Essex. And so the pair ended up with the blue ribbon as well as Best in Show at the greatest outdoor show of the era over a star-studded lineup headed by the famous five: the Wire Fox Terrier, Doberman, Borzoi, Poodle and Pomeranian.

When named the winner, O’Boy and Hartnett were rushed by well-wishers over the ropes and into the ring to congratulate the victorious pair. Mrs. Porter was quoted as saying, “I have always loved his style and personality.” Numerous Best in Show honors were to follow throughout the year for the youngster as he became “America’s Dog”!

The Irishman continued his winning ways until his retirement to his two-acre paddock at Milson in 1937, where he stood at stud with Harry Hartnett, the man who designed the breeding that produced him, raised him from puppyhood, campaigned him throughout his life and handled his stud career. Hartnett went on to put winning records on O’Boy’s son Topnotcher and grandson Premier. During the war years of the early 1940s, Hartnett worked for a dog-food company and began suffering from heart disease. His death in 1944 was followed by that of his heart dog O’Boy the following year. 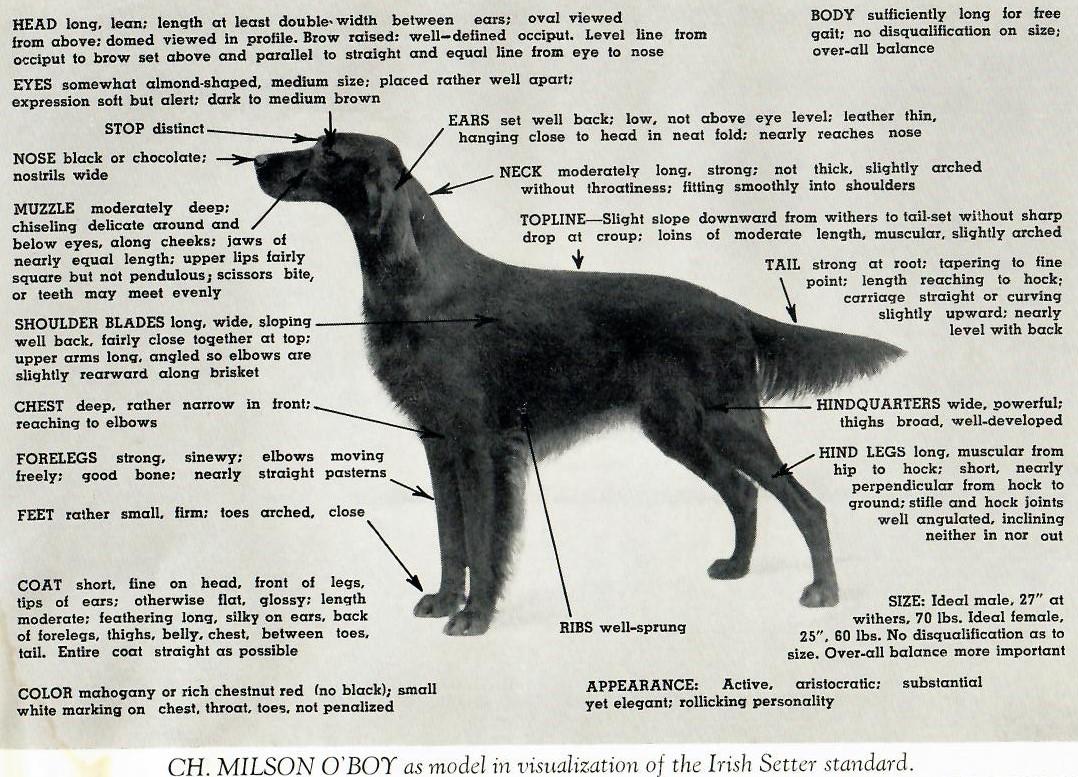 Eighteen years after his death Ch. Milson O'Boy was the model for the Visualization of the Irish Setter standard in Popular Dogs magazine.

Mrs. Porter remained in dogs for years as a very important client of Jane Kamp Forsyth, who campaigned numerous Best in Show setters for her. Hers was one of the most revered names of famous owners who quietly back top dogs for decades. Included in their numbers were the Gordon Setter Ch. Legend of Gael and the Irish Setter Ch. Webline’s Rio Hondo, bred by California’s Dick Webb. Jane won repeated honors over the years with Mrs. Porter’s ownership on them as well as a number of other breeds, including Afghan Hounds.

Mrs. Porter's first loves — the Irish Setters — were buried at the Hartsdale Canine Cemetery, where this inscription appeared on the family headstone:

“But I have learned it matters not

Just where my old friends lie.

For all are buried in my heart

And, there they never die.”

In these troubled times, these fitting words sent on to us by Mrs. Porter apply to all who love dogs and to all who are loved by them. And to all we have lost. The treasure of my books warms my own heart and reminds me of the past as we struggle to return to normalcy soon.

Perhaps we will soon see the light at the end of the tunnel. Meanwhile, stay safe and take care of yourself and your loved ones.

© Dog News. This article may not be reposted, reprinted, rewritten, excerpted or otherwise duplicated in any medium without the express written permission of the publisher.
Wed, 04/22/2020 - 6:46pm