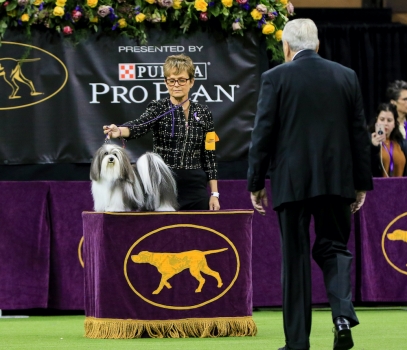 Top-ranked dogs are pre-invited to Westminster. For everyone else, it's the luck of the draw.

Disappointed exhibitors across the land are lamenting the fact that many of their entries did not get into MB-F before the Westminster limit was reached.

Truly, I empathize with them, as I know how they feel. It was December 1959 when I first experienced such a devastating disappointment. I had just handled my friend’s red-and-white Cocker Spaniel to my very first BIS win ever at the Camden County Kennel Club the day after the Kennel Club of Philadelphia show – both of which were prominent benched shows of the day.

My mother and I were planning to drive from Virginia to Pennsylvania with the original purpose of seeking a major for my Norwegian Elkhound bitch. When my mentor Mrs. Laubach found out about our trip, she honored me by entering Ch. Dau-Han’s Dan Morgan for me to transport and show for the first time at Philadelphia and Camden.

At Philadelphia, Morgan placed third in the group. With the support of good Cocker people of the day, we were thrilled. Johnny Paluga, who was working with Ted Young Jr. at the time, perfected Morgan’s foot trim the next day before judging, and, wonder of wonders, Morgan went BIS! When we found the nearest pay phone to call Mrs. Laubach collect, she too was elated and announced she would enter him at Westminster. The drive home seemed to fly as the excitement of the weekend and the anticipation of going to New York for “the Garden” were discussed in great detail.

Mrs. Laubach had mentored me in dogs for a few years and knew that from childhood my dream had been to exhibit at the famous Westminster Kennel Club show. The show’s history and tradition made it the pinnacle of every dog person’s dream. What a blow when the entry came back later due to its tardiness in arriving. The limit for the show had been reached before the Cocker’s entry arrived. Since my Elkhound bitch’s entry did make it, I went to the 1960 Westminster show, where she went BOS.

It was a great lesson for me, as I learned to send WKC entries in a timely fashion. My father’s advice that “Procrastination on your part does not constitute an emergency on mine” still resonates with me to this day. When I moved to California in 1961, I simply could not afford the trip to New York every year on a schoolteacher’s salary. In 1969 my husband (Dr. John Craige) and I made the trip with his favorite of our Elkhounds, Ch. Vin-Melca’s Howdy Rowdy, and were “over the moon” with his BOB and third place in a strong Hound Group. The following two years his half-brother Ch. Vin-Melca’s Vagabond won the Hound Group at Westminster and started the Elkhounds on a roll.

The time came when the famous club started inviting dogs ranked high in their breed and accepted those entries earlier than the entries of unranked exhibits. This year with the expanding numbers of breeds in the 21st Century, the top five in each breed and national-specialty winners received invitations. Entries for those qualified were received earlier than the opening date of March 19 (postmarked) for other entries. Mailed entries were limited to one dog per envelope, according to page 11. When entries on unranked dogs come in before closing, they become part of a lottery system. Even if multiple entries on the same dog come in (like purchasing lots of lottery tickets in hopes of winning the big jackpot), it’s my understanding those entries are sorted and only one for any given dog actually gets into the lottery.

Entries officially closed on April 9. Evidently hundreds of entries were returned due to the show’s limits. Information containing all regulations for entries had been posted on Westminster’s website in the premium list on page 7 for some time.

Over the years the Westminster Kennel Club has heroically handled a myriad of problems. Madison Square Garden itself started remodeling procedures that greatly reduced the area left for the actual housing and grooming of the dogs several years ago. This preceded a move to the Piers for breed judging. Similar problems started occurring at the Piers, once again due to remodeling and the resulting diminished floor space available for the show.

That the club even proceeded with a show in 2021 is a tribute to the ingenuity and dedication of the hard-working volunteer members and the actual Westminster staff. New York City has been closed down and activities greatly restricted since the pandemic began in early 2020. Due to these restrictions and those of the famous sports arena, the club moved the show to the Lyndhurst estate in June – thus taking advantage of lesser restrictions on outdoor activities. Nonetheless, COVID-19 protocols remain in place. The Gothic Revival mansion and its surrounding beautiful grounds became a National Historic Landmark when it was donated by the daughter of railroad tycoon Jay Gould in 1966.

Lyndhurst itself is a true “garden spot” that shows off what a beautiful place New York State can be in summer. With 67 acres of lovely landscaping and plants, the estate has its own conservatory. It is located at the beginning of the pastoral Hudson Valley not far from Tarrytown. Fortunately for those who can’t make it, since both entries and tickets are limited, the show will be on Fox for all to view on television the beauty of a different part of New York than that seen in February. Watching those magnificent dogs that DID get entered in such a setting should help ease the disappointment of not being there in person.

Furthermore, it’s never too early to start making plans for the next Westminster early in 2022!

© Dog News. This article may not be reposted, reprinted, rewritten, excerpted or otherwise duplicated in any medium without the express written permission of the publisher.
Tue, 05/25/2021 - 9:06am