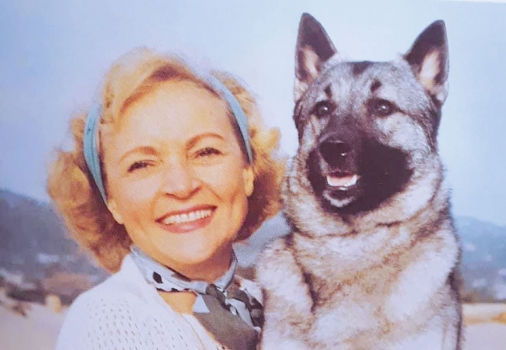 Betty with BIS Ch. Vin-Melca's Before Dawn on Carmel Beach in 1982.

The Greatness of Icons

If ever there were two icons universally loved by all, Betty White and John Madden fit that description. To lose both of them over the holidays was heartbreaking. Betty White’s love of animals and dogs in particular made her the darling of our dog world. Celebrities, presidents and millions of unknown fans all around the world agreed – she was simply the best!

Betty passed away quietly 18 days short of her 100th birthday in her Brentwood, California, home. The New Year’s weekend for years featured her as a hostess and commentator for the famous Rose Parade in Pasadena, California, every January 1. Later she shined in the same position with Macy’s Thanksgiving Parade.

My first meeting with beautiful Betty came at a social event in the 1960s in Los Angeles. At that time her interest and love of animals were expressed passionately on her radio show as well as at numerous public events. She had married the “love of her life,” Allen Ludden, while participating in his television game show “Password.” In 1978 Betty and Allen built their beautiful getaway dream home on the beach in Carmel.

Betty was a lifetime cheerleader whose optimism and upbeat, delightful personality attracted all who met her, and those who did not meet her enjoyed her from afar on television. She was indefatigable and at one time was working more than five hours a day six days a week on live TV. She credited that ad-lib experience with helping her to learn quick, on-target thinking while on the air. Her performances on “The Mary Tyler Moore Show” and “The Golden Girls” were unquestionably some of her greatest work.

One of my personal favorites was the fabulous grandmother she portrayed in the movie she made with Sandra Bullock in 2009, “The Proposal.” On receiving one of her many achievement awards – this one presented by Bullock herself – Betty issued one of her famous quips that not only roasted the presenter but cracked her up! Betty’s wit as a comedienne was famous and fun. 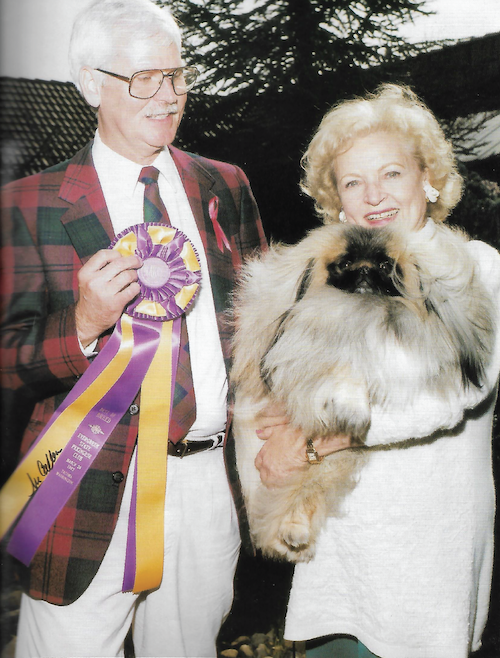 Betty, a Peke owner for years, with Ch Linn Lees Royal Silbermann in 1993.

When Allen passed from cancer in 1981, Betty was devastated. In time on Larry King’s show, she was asked if she would ever consider seeing other men. Her classic answer: “If you’ve had the best, who needs the rest?” About the same time her devoted and adored mother Tess was suffering from failing health. Thus, Betty concentrated on being with her mother as much as possible. Betty often showed up at dog shows to be the trophy presenter, and one year over the Mother’s Day weekend in May 1983, she came out to Pebble Beach with her mother for the Del Monte Kennel Club Show, held on the beautiful grounds of The Lodge.

The following day she brought her mother to our house to see a litter of seven-week-old puppies out of our BIS-winning “Gilda.” Mrs. Christine Tess White immediately fell for a typey female who became “Tess” after Betty’s mother. Betty always credited her mother for influencing her to be optimistic and practice the power of positive thinking. So, the mother and daughter agreed their choice was bound to be a winner. Imagine Mrs. White’s later delight when her favorite from the litter did indeed become a BIS winner!

Mrs. White passed away in 1985 with complications from diabetes. Not long after that I ran into Betty after sadly leaving the veterinarian, who had just euthanized one of my favorites due to the infirmities of old age. Betty consoled me by pointing out how good it is that we can euthanize animals that are suffering and beyond medical help. She shared the tragic story of how her beloved Tess had endured amputations caused by diabetes prior to the merciful end.

The amazing accolades about this wonderful woman that have been in print, on TV and on social media are a testimony to the universal love she created. She brought joy to all, and was ever effervescent and optimistic. Her love of life was contagious, and she will forever be the icon we all loved. Our lives were blessed to have her in them. Her kindness and warmth will always be with us. 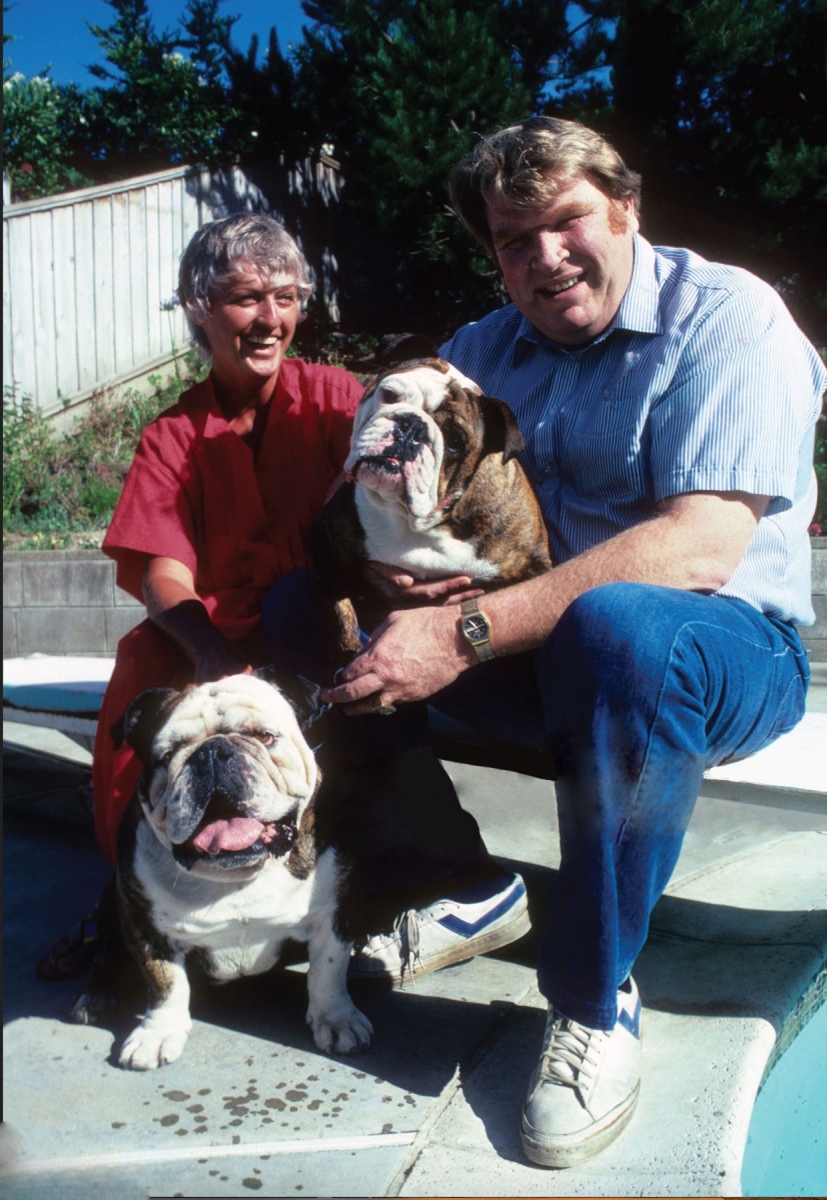 Although I never knew the iconic John Madden personally, I saw him on the football field as the head coach of the Oakland Raiders. His coaching record still holds the second-highest win percentage record in the NFL. His Raiders won the Super Bowl in 1977, and the stress of coaching in the NFL resulted in his retirement in 1979 to become the color commentator for NFL telecasts. He teamed up with Pat Summerall to call eight Super Bowls over the years.

His lively and colorful delivery along with play explanations endeared him to all who loved football. My love of the NFL game started in my youth watching the “greatest game ever played” as designated by those in the know (you could look it up) between the New York Giants and the (then) Baltimore Colts and held in Yankee Stadium in December of 1958. My recollection is that Colts quarterback Johnny Unitas pulled off a great “two-minute drill” before the term became widely used and tied up the game with consecutive passes to Ray Berry. The game went into overtime, and I won the bet with my father, who had the Giants and thought their defense led by Sam Huff would be the winning factor. The Colts’ field goal won the game in OT. The game was so exciting it was credited with sparking a following for professional football.

John Madden himself added to the popularity of the game because of his personality and passion for the game. His warmth, humor and love of football were truly contagious. He was a 12-time Emmy Award-winning broadcaster who entered pro football's Hall of Fame in 2006. Here was a football icon appreciated from afar by this writer. All the NFL games on this January 2 paid tribute to Madden with a moment of silence, and rightly so. The Madden football video games will influence gamers for years to come.

Iconic people have the opportunity to influence those from all walks of life. Perhaps the New Year will bring some new ones into our 2022 world. In the meantime, our gratitude for Betty White and John Madden having been in our lives – whether up close and personal or from afar – needed to be acknowledged. God bless them both.

© Dog News. This article may not be reposted, reprinted, rewritten, excerpted or otherwise duplicated in any medium without the express written permission of the publisher.
Thu, 01/13/2022 - 12:00am