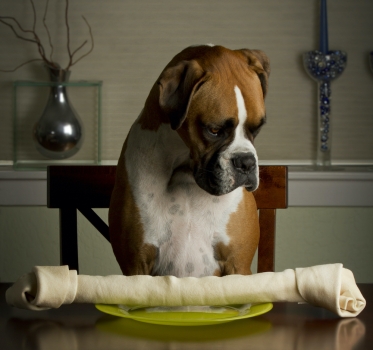 A dinner table for four: Which three guests, dead or alive, would you invite?
By
Eugene Z. Zaphiris

This is an enticing question. I think I would invite Betty White, Annie Clark and Frank Sabella. Oh, what fun we could have.

Thanks for asking. I was fortunate to have had dinner with Anna Catherine Nicholas and Alva Rosenberg years ago, and it was absolutely wonderful. I've often thought how amazing it would be if Geraldine Rockefeller Dodge could have joined us.

Dinner with Bobbi: Matt Stander and Gloria and Nat Reese. Dinner and dancing at the Concord, then enjoy the show while watching the stage movie. Fabulous.

I would love to be joined at a sumptuous dinner by the late Sunny Shay of Afghans of Grandeur. Seated next to Sunny would be the departed Peter Belmont, who set a successful course for so many in the dog world. Mr. Eugene Blake, with a wealth of anecdotes and knowledge, would round out this special gathering. A toast to a dazzling trio.

My husband Jeffrey, Bob Goldstein and Asa Mays. How I wish there could be eight more!

This would be a wonderful opportunity to hear from the early pioneers of purebred dogs … so many questions to ask!

My first choice would be Mary Amps of the Ghazni Afghan Hounds in India and England. Her dog, Ch. Sirdar of Ghazni, was the foundation for the breed in the Western world. She lived in India with her British military husband and had everything to do with bringing and popularizing the breed to England in the early 1920s. She wrote quite a lot about her experiences and the dogs in their native lands. She lived until the 1960s.

Next would be the American Joseph B. Thomas of the O’Valley Farm Borzoi. He travelled to pre-revolutionary Russia in 1903 and 1904 to find and import the best Borzoi possible. Having been disappointed in the Borzoi he saw in England (“The leading kennel notable for the size and coarseness of its dogs coupled with bad running gear”), he visited the largest and most prominent kennels in Russia where hundreds of Borzoi were kept by aristocrats and wolf hunting was still commonly practiced.

My third invitee would be from a later era … importer, handler and judge Mr. Percy Roberts. Born in England, Percy Roberts opened his American kennel in 1919, and became a professional handler and an importer of dogs for those seeking to bring quality stock for show and breeding purposes to America. It was very quickly discovered that he had tremendous talent for recognizing breed type and quality, and soon he was providing leading kennels here with many of our all-time finest dogs. As a top handler he won BIS at Westminster four times, and later became one of the great judges, respected worldwide until his death in 1977.

What fascinating stories these three could tell from their experiences, which can never be repeated.

The three ideal people with whom I would be delighted to have one more dinner would be Annie Rogers Clark, Nigel Aubrey-Jones and Frank Sabella, and it would be an evening that I would hope would never end.

Can I have two dinners? One to satisfy my curiosity about dogs in the past, regardless of breed, and one specifically about Whippets. I won't include people that I knew personally and talked to a lot who would otherwise be obvious choices, like Annie Clark or Tom Stevenson.

For the first dinner party I’d first invite Alva Rosenberg, the “dean of judges,” probably the most respected all-rounder of his time. I met him once a long time ago, at the Chicago International KC show in 1967, but I was too young to have the sense to ask him what the big winners of the first half of the 20th Century were like: Saddler, Bang Away, Colonel, etc.

My second guest would be Mrs. Hayes Blake Hoyt, whose Blakeen prefix was more successful in Poodles than any other. She was a brilliant breeder and promoter: She single-handedly helped make her breed more popular than most. I’d love to hear what she thought of the PCA winners of today. And she had Afghan Hounds, too!

My third invitation would go to England, either to Florence Nagle of Sulhamstead Irish Wolfhounds or to Raymond Oppenheimer of Ormandy Bull Terriers: Both were brilliant, outspoken and controversial in their own time. I’m sure any dinner party with these guests would be a success — provided of course that someone other than me did the cooking …

For the Whippet dinner I would invite the three leading American breeders of the early/mid-1900s: the sisters Judith and Julia Shearer, who had Meander Kennels in Virginia, and Mrs. Margaret Anderson of the Mardormeres on Long Island. They didn’t like each other at all and had totally different types of dogs, so it would probably be an explosive get-together. The Shearer sisters were forerunners to Mrs. Wear of Stoney Meadows, and Mardormere provided the foundation stock for Peggy Newcombe and the Pennyworths, but I knew both and talked to them a lot. (And of course they were far more sympathetic to each other than their forerunners had been.)

Joining me at my dinner table for four – at the Inn in Little Washington, Virginia:

Michele (Mike) Billings – a great lady and a wonderful mentor to me.

Wayne Ferguson – always a gentleman and a delight to be around.

Gene Zaphiris – knows all the "latest" and is caring and fun.

Stopping by our table for a chat is Frank Sabella – sharing his wonderful knowledge of dogs and people.

Also stopping for a quick chat is R.C. Sproul – to share some wisdom and bring some positive joy for the evening.

There are so many people to invite: How about a banquet table full?!

If I could assemble the perfect dinner party, it would include: Charlotte Hayes Blake Hoyt, Alva Rosenberg and Pat Trotter. Why? Both Mrs. Hoyt and Trotter were and are, respectively, not only breeder-owner-handler-judges of the highest level, but also trailblazers for women in the sport.  Mr. Rosenberg was one of the finest and most knowledgeable judges of all time and the kindest of men. I can only imagine what I could learn from these three.

The three people I would invite for dinner would be ... Eddie Dzuik, Wade Burns and Jon Woodring. My three most favorite people in Beagles. We always have lots to talk about.

This was so easy you just can't even imagine. Denise Flaim, Michael Faulkner and my husband, Jeff Kestner. Wouldn't that be fun? Topic for the evening ... "Nothing about dogs – we cannot mention the word unless feeding one from the table."

So many choices: Pat Trotter, Edd Bivin, Sam Draper, Helen Miller Fisher, and there are so many others.

This is a brilliant and cathartic question. My unabridged answer is too long and personal to be published. I would invite my deceased father, my deceased cousin and best friend in life, and Darrell Hayes. It is sad that there are now those in the sport who do not know who he was. I would also make room at the table for my wife, who knows all of these loved ones but who deserves to see again why I love them as I do.

Tom Bradley, Dottie Collier and Jeff Pepper: Three kind, giving, optimistic, knowledgeable and FUN people. There are more for sure, but they are my top choices!

1) My dad, who passed of a stroke in 2018 ... to talk again and have a proper goodbye, last words and hugs. 2) My mom, to see the joy in her eyes to have Dad there. I know she misses him madly. They are/were best friends and exactly what I strove for all my life. 3) My sister, to have the family back together again. For her to see the love of us four again.

Thomas Jefferson, Ben Franklin and John Adams. Three of the brightest scholars in the history of the U.S. Imagine what you could learn from a round table with those three.

Only four? If I had to choose: Wendell Sammet, Richard Bauer, Ted Young, Tim Brazier. All took the time to help teach a young girl, encourage her, and always had time, and still do, to be a friend. Yeah, I am a Poodle person, but love all dogs. My 11-year-old retired champion is staring at me, he wants his morning walk ... Gotta go.

Only one, my wife MaryEllen.

I would invite Elaine Mathis, Asa Mays and Edd Bivin.

© Dog News. This article may not be reposted, reprinted, rewritten, excerpted or otherwise duplicated in any medium without the express written permission of the publisher.
Fri, 02/04/2022 - 12:21pm