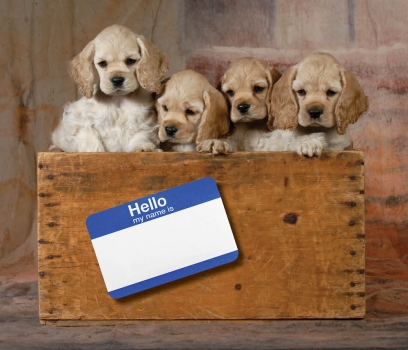 Do you have a special method or theme when naming your puppies in a litter?
By
Eugene Z. Zaphiris

My breed (Briards) follows an alphabetical naming system that we all participate in. We go consecutively through the alphabet year by year, skipping the use of the letters K, X, Y and Z.

2022 is the T year for the breed. All Briard registered names will begin with the letter T. With such a naming system, most of us follow no theme, but just the letter.

My first Briard was born in 1982, which was the T year also, so we have gone around the alphabet two times since then. We are scrambling for names starting with the letter T that we did not use the last two times!

We use the prefix Sugarbush from the original name of the road our lake home, which is located in northern Minnesota and is named for the art of making maple syrup. The dog names come from Mom and Dad being Parrotheads and playing endless Buffett songs on the road. Buffett recently released an album, “Songs You Don’t Know By Heart” – we had four dogs with these registered names. Fins up!

I always have a theme for my litters. Each puppy needs a name so they can be their own puppy. My themes have ranged from cookies, cars, The Flintstones, department stores, Hamilton (the play), golfers (four boys), Mork and Mindy, Frozen and now Disney. My buyers don’t have to keep their call names, but many do. My registered names are mostly songs.

Growing up Irish Catholic in Brooklyn, New York, our ancestry or lineage was first and foremost in our home. My parents always displayed the Irish Tricolor and the American flag. Being Irish-American was something to be very proud of, and we were. My father's people were from Skibbereen in County Cork, and his fourth cousin was Michael Collins, the Irish Revolutionary. My mother's people were from the Aran Islands. I have carried that love and respect for my heritage proudly, and that is why all of our pups are registered under the prefix Aran Isle, with reference to something Irish in the registered name. Our great nation was built on many different heritages, and my hope is that all parents teach and keep alive the importance of lineage in their children. After all, "it is who we are"!

I use song titles when deciding on a registered-name theme for a litter of my Flat-Coated Retrievers. To honor the stud dog, I first look to see if there are interesting song titles from artists originating from the same state or country as the stud dog. Sometimes this can lead to a wide variety of musical genres. Thus, my "New Jersey Music" litter had everything from Altair Summer Wind BN CGC RN (Frank Sinatra) to Ch. Altair Kodachrome (Paul Simon) to GCh. Altair Dancing In The Dark RN (Bruce Springsteen) to the novelty hit GCh. Altair Martian Hop (The Ran-Dells).

When song titles from a state or country don't provide sufficient suitable name candidates, I then pick a word or topic, such as my current litter with "Happy" in all the song titles/registered names.

I never liked the theme model because I thought it took away from the individuality of each puppy. I found that every dog is an individual, just like humans; no two are the same.

We always named each puppy with a registered name from which we could use a part of it as a call name. Example, we named one of the puppies "Lapdox Midnight Magic" because he was a dark black-and-tan Dachshund, he was born at midnight, and the birth just seemed like magic. His call name was "Magic." All our puppy litter names were chosen after much thought as to how the registered name each puppy had would be unique to that puppy and the call name for the puppy could be connected to the registered name in some way.

At first I just asked new puppy owners to use our kennel name. But I found out that some owners did not do this, and some even used their own kennel name instead. So I decided I would register all the puppies and just transfer ownership afterward. Each litter had a litter letter. The new owner could choose the name starting with that letter, and I would register that puppy with that name: Storm Kloud's Atlas, Storm Kloud's At It Again, Storm Kloud's All Systems Go, etc. All puppies were tattooed so that number was on the blue slip that went to AKC. We had also had a person try to use an AKC registration of one of our dogs on another dog. Fortunately, I had the tattoo number of that puppy on the AKC slip. So when AKC contacted the party they said the dog was dead. This method of registering puppies stopped a female from being bred with the wrong pedigree.

I usually start with a theme, and take it as far as it can go through as many generations as possible! I also love to combine the sire and dam names to create a new theme. While it can be challenging at times, it has also been a lot of fun, as it creates a family of dogs that you can recognize through time with the original theme.

It's a German tradition to alphabetize the litter of puppies. So my last litter of Biewer Terriers was a "J" litter, and since I'm now going through the alphabet for a second time, I use two "Js" in the names. This was a pet litter of boys, and knowing that most of the new owners don't keep my call names, I decided to make it fun. This is my Alcoholic litter: Jjim Beam, Jjohnnie Walker, Jjack Daniels and of course Jjagermeister!

I pick a word and name the litter from there. For the last litter, everyone had the word “twist” in their name. My word just comes to me from a song I hear, or anyway it pops in my head and I go from there. It’s fun for me.

We always name our dogs after singers and their songs.

I’ve used the names of actors, songs, singers, lines from poetry. My kennel name is Hoong Tao (Pekingese). Transliteration from Chinese is “Red Head” because my hair was red back in 1994!

My first home-bred champion was AKC PR and Intl Champion Hoong Tao’s Rule the Wind, aka Benny. His sire was Ch Jo-Li’s Wind in the Willows, and he was out of Ch. Briarcourt Rhapsodee Rules – hence, Rule The Wind.

A friend used this name for his new sailboat!

However, the puppies we keep are named after "Things Your Mother Told You Never to Do." Among my favorites have been:

We try to tie a theme based on something with the sire. Our last litter was to a dog called "Coach," so we chose baseball-themed movies. One used "The Natural" and called him Redford, another used "61 Asterisk" and Maris.

When I bought my first Chinese Crested many, many years ago, her name was Jet Star. In her honor, every single Chinese Crested I have bred down from her has the word “Star” in their name. Their “call names” also come directly from their registered names.

To date that have been more than 40 Chaparral Chinese Crested Champions with the word “Star” in their name.

I try to have a theme when naming my pups because it’s then easier to identify the dam and in some cases the sire in later years. Back in the day, mid-1970s, when I first started breeding Norfolk, I used all British names in the litter, such as “The British are Coming,” moving on in the next litter to British authors. And then there was the “W” litter, such as Weatherman, whom Matt Stander named Storm. In a recent litter I used two different sires’ frozen semen, naming the pups “Double Dip,” etc. My now 2-year-old “Bee Jeweled” is one of three in the litter beginning with “Bee” that is now in whelp. So I wonder: Do I continue with “Bee” or move on with “Jewel”?  Any “Jewel” suggestions out there?

When I first decided to breed Irish Setters in the ’90s, I studied old pictorials and memos, attended my first national, and took the advice of my mentor and handler, Tom Tobin.

Once we planned a foundation pair, two years later the first WindRose litter arrived with the (obvious) theme FIRST, and I had a list of 12 names to use; every puppy’s registered name had to include FIRST.

Using a word in each litter’s names made perfect sense to me because it’s a simple way to identify which litter included which dog, thus another way to quickly identify the pedigree.

During my search for foundation stock, it was so difficult to identify a dog by its registered name, especially from a “theme” litter. Who knows every Sinatra song? And using just one letter is nearly impossible to identify the dogs in a litter.

From my perspective as a long-time breeder, one who is interested in future matings or wants to see what certain matings produce, I prefer and use a single particular word, often with a phrase that contains that word, like “First and Goal.”

I have always been fascinated with registered names. I am a long-time opera aficionado, having studied voice, sung with the Lyric Opera’s Veterans’ Chorus, and written a biography of super diva Maria Callas. In the past I have had puppies named Nabucco, Tolomeo, Aida, Medea – names of opera characters.
I have also used the composer names Rossini and Bellini. My favorite was a lovely GCh. bitch named La Callas (Maria) of Bybur.

My litter themes for decades have surrounded music. Honors my concert-piano dad! At my feet now is Syncopated Rhythm (Zac); his sire was Baritone (Barry) and his dam was Operetta (Diva). I have had the Big Band theme, Rock and Roll, and the Irish Tenors, too! Always fun to choose.

The first part of names is the breeder’s kennel name, middle is theme of the litter, end is name of sire’s kennel name, and last two letters are size and coat. My Way Gold Diggers V Eternal MW!

Depending on litter size and male-female litter makeup, my puppy names come from fiction (such as Robin Hood and other denizens of Sherwood Forest), cartoons (such as the characters in the Pogo cartoons), geographical area (such as New Mexico towns starting with “T”), or colors and a geological feature (such as Blue Glacier). I wish I had started years ago with an alphabetical schema, though – easier for others to follow – but who thinks of that with a first litter?

© Dog News. This article may not be reposted, reprinted, rewritten, excerpted or otherwise duplicated in any medium without the express written permission of the publisher.
Fri, 06/03/2022 - 12:45am