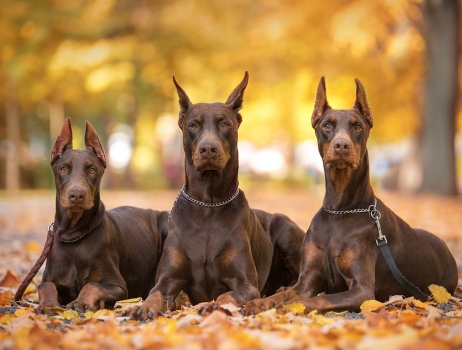 The Doberman is admired by many fanciers for its noble bearing.

What breed would you like to own that you currently do not, and why?
By
Eugene Z. Zaphiris

I’d love to have a Peke. Love their personality and playfulness. Don’t love their grooming. My prerequisite is that David Fitzpatrick come along with the dog.

Since I own the best breed of dog in the world, Rhodesian Ridgebacks, I am not interested in another breed. So I would go to the pound and pick out the sweetest dog there. My wife and I were in an antique shop in the mountains the other day, and they had the cutest dog in the world that they had rescued.

A Rhodesian Ridgeback that has been raised and trained by Frank Murphy. It would be perfectly behaved!

I would have a Standard Poodle in full show coat with someone else to constantly maintain it. I don’t think there is anything prettier, and I would just want to sit and admire it.

Can’t imagine not having a Tibetan Spaniel, but as an additional breed … maybe another Dandie or a Border Terrier. My Deerhounds were my loves! But age and Florida space require small, and leaving them all winter in New York is not a good option … But if I had more space in Florida, I would have a Deardog!

Irish Wolfhound, always wanted one after seeing an old Peter O’Toole movie with two of them in front of a roaring fireplace.

What an embarrassment of riches! As a handler I've already lived with a number of wonderful breeds besides my own Greyhounds and Amstaffs, but to be devoted to another breed ...

English Setters, because I fell in love with the breed while cuddling those classically beautiful Candlewood puppies at Jeannie Millett's house.

Irish Setters, because I loved every one of those beautiful redheads that Lucy Jane Meyers and Ted Eldredge sent to Dick Cooper's kennel.

Manchester Terriers, because every one of them that I showed was a pure delight.

Bull Terriers, because everyone needs a good laugh, and, honestly, I wouldn't know what to do with a breed that comes when it's called.

Nova Scotia Duck Tolling Retriever. Breeders tell us they have a great personality albeit a bit headstrong. One breeder said they were just like a Golden but they had an “off” switch. Besides which, they are adorable and a good size.

I think at this point in my life, something without a lot of hair would be a smart move! I’ve always wanted a Doberman … I would love a Whippet … also love Chihuahuas and adore Havanese! I love so many breeds that I would love just about ANY dog, but after showing and breeding Poodles for over 50 years, I’m ready for a bit less coat to care for.

I would consider a Frenchie, or a Bulldog. They make me smile and feel full of joy to just look at them. The good ones, of course. My third one would be Dobermans; to me, they are beautiful and noble.

What a fun and interesting question. From 20 years of Australian Terriers and 50 years of Salukis to the Kooikerhondje! They are moderately small but not so small as to be in jeopardy of our local raptor population, sturdy and could live comfortably in our weather, have a reasonable work ethic without being over the top, a nice amount coat but not tons of grooming, personally pleasing coloration, a lovely companion to try some of the wonderful new outlets we now have available with AKC. I have been continuously attracted to the Kooiker since the first time I encountered them about 15 years ago.

Oh, so many dogs, so little time!

Today? In no particular order of preference, I would be THRILLED to add any of these to my family ...

Anatolian Shepherd Dog (fell in love the first time I met one, and I live in coyote country, so ...)

Irish Wolfhound (grew up with one, still miss him!)

Scottish Deerhounds (apparently, I like the big gray ones!)

Otterhound (and the scruffy ones!)

Ibizan (because who doesn't want a dog that can go nearly six feet straight up just because they want to?!?)

Dachshund - Wire (little bit o' hound, little bit o' terrier from what I have seen temperamentally, and I love their sense of humor!)

Afghan Hound (but only if they come with their own resident groomer!)

And my current breed: Basset Hounds

Whippet, hands down! Their ability to adjust to almost everything and anything that comes their way. You will find a Whippet in almost every event AKC offers. During the 40 years of going to shows, Don and I always had a Whippet with us.

There is almost no breed that I wouldn’t like to have! I love Afghan Hounds, and had some at one point, but unless you enjoy grooming you probably shouldn’t have them. I am grateful that others do the work and keep Afghan Hounds that I can admire. I am seriously interested in all the Sighthound breeds. If I could live my life over, I’d probably devote my whole life to the Azawakh, but I also have a soft spot for Bull Terriers and Pekingese …

When I was younger I was sure that one day I’d have all the breeds I like, but it’s so easy to get a Whippet puppy instead. Physically, it’s not the most prepossessing breed there is, but they are so sweet and they really fit me. I have owned them for more than 60 years, and my current youngster is a direct descendant of a dog that I imported from England in 1963.

I should very much like a Caravan Hound … And if not that, then a Saluki!

I am most comfortable with Sighthounds … which is evident!

I would have to say a Boston Terrier! Why? NO HAIR (original breed was Lhasas and currently own a Scotch Collie). Why a Boston? They are such a neat and tidy package with very nice balance, beautiful markings and lovely temperaments. Confident yet compassionate in a portable size!

The breed I would like to own would be a Boston Terrier. I had one years ago and really miss their personality.

I am down to my last Afghan Hound living with me, an old lady of 13, as well as two Tibetan Spaniels, both seven. I wouldn’t ever want to be without a big dog. When the Afghan leaves me, I suspect I’d add a Saluki or a Greyhound. Sighthounds have my heart. Or if I wanted to do something out of the box, I’d choose a Doberman or a Standard Poodle. But after 50 years, what would I do with a breed that could be safely let off leash and never dream of running away?

In a heartbeat … a Dobe. A correct Dobe takes my breath away. Clean lines. They are what they are. No artifice. Intelligent and loyal.

We have had Siberian Huskies, Shetland Sheepdogs, Pomeranians and Boxers over the years, so we can handle dogs that shed trash bins full of fur. But we always wondered about having another fur bundle — a Golden Retriever. They are the epitome of “man’s best friend.” Not certain we can buy any more trash bins with what we have at present.

If I were to select another breed, it would be the Dandie Dinmont Terrier. Funny, good-natured terriers, they are a rare breed in need of preservation, and that appeals to me.

How do you pick just one?

1. Neapolitan Mastiff. I had a couple of Mastiffs when I was young, love the big Molosser breeds, and these guys – they're just too adorable. But I've reached my late 60s, and I'm afraid it's a bit too much dog for me.

2. Sealyham Terrier. Now with three Mini Bulls in my life, I realize that deep down I've probably always been a terrierist. But would I really learn how to strip that coat properly?

3. Pumi. Or Lagotto Romagnolo. Attracted to both because of the overwhelming cuteness factor and the tempting thought that they might be more biddable than the Mini Bulls, but both are well outside the realm of breeds I've been drawn to all my life, so it would take a lot of thought.

Quite a nostalgic question for me. As a 9-year-old I negotiated for a Rough Collie bred by one of the foremost breeders of the day. She didn’t want to sell this beautiful tri, and I would have no other. I offered her a “deal,” and she took it. Paddy was my companion for 14 years, sleeping at my bedside, never needing a leash, as he followed me wherever I went and was always my protector.

If I chose another breed besides my beloved Dobes and Wire Dachshunds, it would be a Welsh Springer Spaniel. Love those sweet faces!

Well, we have had Scotties for the last 50 years to keep the Deerhounds awake. I would love to have Wire Fox Terriers, which I grew up with.

That's a tough one, but right now I might choose a Havanese. I have yet to run into one that isn't a reasonable, cheerful being, they seem to be natural and easy keepers, and there's enough coat in a variety of colors/markings for me to enjoy grooming it.

But that's today – I love so many breeds!

I would have an Irish Wolfhound. In the early 2000s I had three different IWs that ended their year as #1. Since then, I've had miniature Longhaired Dachshunds. But I do miss my big dogs. Lots of work, but such loving, gentle dogs.

Apart from my own breed, I would LOVE an American Staffordshire Terrier. I adore the breed, love everything about them, and no hair to groom. And also I would have a Kerry Blue Terrier because of their exuberant Terrier temperament.

During the 50-plus years of my involvement with purebred dogs, I have become familiar with many other breeds. The reality for most of us is that we simply love dogs and we would be happy with any breed that might become a member of our family.

However, my personal choice for what breed I would like to own has never varied. I have always had a special feeling for the Doberman. The appearance, personality and intellect of this breed have consistently won me over. I have had the privilege of judging Doberman specialties, and during those moments, I always feel like a kid on Christmas morning.

I thought my absolute favorite breed was the Doberman. I had them for years and bred one litter. Back then, 30 years ago, most vets and I considered them to have stable temperaments, and they were easy to train, willing to please, and “wash and wear.”

But when my oldest girl was over 12, I wanted a puppy, and none were available at the time. So I investigated Collies and Irish Setters, and became enthralled with the idea of a new Irish puppy.

Now, nearly 30 years later, I’ve owned, bred, showed and mentored others, which has led my kennel to produce lovely puppies that can and have done EVERYTHING their owners wanted. So, as I anticipate another Irish in my life, it’s helping ease the loss of my old girl. Family thinks a little foo-foo dog would serve me better in my 70s, but they have never felt what an Irish Setter contributes to a soul, and I know I don’t want to ever be without one.

© Dog News. This article may not be reposted, reprinted, rewritten, excerpted or otherwise duplicated in any medium without the express written permission of the publisher.
Thu, 04/28/2022 - 6:47am