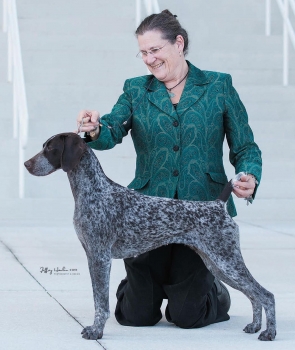 What are your memories of Gwen DeMilta?

I first saw Gwen at the Doberman national when she went Winners Bitch with her and her mother’s bitch Kinderwicke. She handled her so beautifully, and she was admired by everyone there, particularly other young children. (It’s when I first joined her fan club!) Then as we progressed in our professional years and as mothers, she became a friend. She was a fierce competitor, but also fiercely loyal to her friends. To others not in Dobermans, she seemed tough, but we knew her to be loving, kind and passionate. Always a professional, always our rock star. A piece of all of us has left, and that piece of our heart won’t be replaced.

I have so many wonderful memories of Gwen …

One of the early memories I have is going to sit ringside and watch her go into class after class of Dobermans and see her “create” a dog by just putting her hands on them. I learned a lot just by watching her.

Then when I got to know her, I found her to be so intense, serious about her job, and a force in the ring, proving a strong woman can be successful and respected.

Oh, and SO funny! I loved listening to her and Rissa crack each other up! AND loyal, too, which is hard to find in the sport anymore.

I thought the world of her, and I hope she knew it … so many people did and still do. Rest well, Gwen … we all miss you already.

One of my most recent interactions with Gwen was at our last Doberman national. I was judging bitches and placed a young 12–15-month red bitch to Reserve Winners with more than 150 competing. When we went for photos, the handler told me that Gwen had just awarded her Grand Prize Futurity winner a couple of days earlier. That was so good to hear and made me feel even more credible that I rewarded the same exhibit as one of the people on my “most admired” list. I had to visit with Gwen afterward to tell her how important that was to me.

Gwen was on my “most admired” list for several reasons. She was an undisputed expert in the breed. In my opinion her evaluation was the gold standard for recognizing Doberman breed type. Just as importantly, Gwen had a knack for breeding dogs with the right stuff, as could be seen by the number of champions and top winners she bred. I remember a couple of times I had called Gwen to discuss stud dogs that I was considering for a future breeding. I don’t normally seek the opinions of others regarding my breeding decisions. Her thoughts were that important to me.

And then there was Gwen the educator. I have been on the DPCA judges education committee for years. Often I would contact Gwen to bring dogs for hands-on. We could always count on her to bring good examples of the breed. She would do anything to support judges education.

There have been few true icons of our breed throughout our history. They occur infrequently. In my opinion, Gwen deserves to be among those that we hold up as being the most influential persons in the breed.

Rest in peace, Gwen. You have left the world a better place for all you did.

Gwen was the consummate Doberman handler. She was fiercely competitive, but truly cared about the breed. When I was first starting Dobermans more than 20 years ago, she would come to me after judging and tell me what she thought I did right and what I could improve. She gave me good perspective and helped me become a better Doberman judge, better understanding essentials. I love judging the breed because of her passion. She took the same passion to all the breeds she handled. She was a great dog person, and we had wonderful conversations.  She passed this on to Clarissa. We will miss her.

There’s no way to put into words the kind of influence Gwen had on all of us: a mentor, friend, breeder, handler, mother, grandmother… the list goes on. We were all so lucky to share the same realm as her.

My most meaningful memory happened a handful of years ago at the Dobe national. Gwen had heard that I was mentoring two upcoming juniors in the breed, and she came over, gave me the look that only Gwen could — at first I thought, “What did I do wrong …” — and she immediately pulled me in and hugged me with tears in her eyes, and told me, “I am so proud of you. Keep paying it forward!” A hug from a woman that strong just held so much power and love. We will miss you forever, Gwennie; we love you!

I did not know Gwen for as long as some, but I found her to be a fierce competitor and just as fierce in her friendships. She was there for a conversation about judging her beautiful breed and was very helpful to me. Her will, guidance and help in making our WGS specialties work was immeasurable. I will miss her calm but forceful and guiding ways. Condolences to Carissa and her family.

For many years Gwen and I were just acquaintances. Fellow handlers.
On May 9, 2015, my mother passed away while I was at a show. I was lost and numb. Gwen came to me and introduced herself … we both sort of chuckled because we both knew each other. It broke the ice, and she gave me such a supportive talk, hugged me and the rest became our history.

For seven short years, Gwen and I developed a close friendship. We would exchange show schedules so we could plan to have dinners together. We talked, laughed, shared stories and memories, and shed some tears.
Gwen was truly an icon in the sport. I will be forever grateful to have had at least seven years of a friendship that filled my heart. I will fiercely miss her.

I remember convening at friend's motorhome for a potluck dinner among dog-show friends. While we were waiting for all the friends to arrive, we were trying to have social conversation, but the motorhome’s owner had a very disruptively noisy crated Doberman carrying on. She tried covering the crate, shushing him, scolding him, all to no avail. Conversation was difficult at best … and then Gwen arrived. She instantly noticed the situation and simply asked, “What’s going on here?” The owner said, “I can’t get him to settle down.” “Oh, really?” said Gwen. She turned toward the offending Doberman: “KNOCK IT OFFF!” … The dog didn’t make another peep the rest of the evening. That’s the command she had over dogs. I will always be in awe of her ability with dogs. She will be greatly missed.

It was in March 2015 at the Maryland Sporting Dog Association show in Belton, way down in southern Maryland. This was the last year at that show site, before the show chairman moved the dog shows to the Howard County Fairgrounds in West Friendship, Maryland.

The show was over for the day – it was Saturday night. I was there with a co-owner who was showing her own dog in the classes. I also had my class bitch with me. We decided to go back into the building and practice with her dog.

There in one of the rings was Gwen with a German Shorthaired Pointer and her friend, the late Patty Crowley, who also had a dog. They were practicing together and helping each other. The GSP had not placed in the group that day, so they were taking the opportunity to practice with her for the Sunday show. They were both very gracious and offered some handling tips to my friend with her Chesapeake Bay Retriever.

I always thought of Gwen as a Doberman handler, but then she started campaigning German Shorthaired Pointers, so she was often seen at the rings where the other Sporting dogs were being shown. I did not have much contact with her previously, but her offering help to a newcomer to the sport was much appreciated.

Gwen will always be a breeder/handler icon in the Doberman breed. Her mentoring and assistance to new and experienced breeder/owners will never be forgotten. With her love of the breed and expertise, she brought many new people into the wonderful world of dog shows. Loved by many, gone too soon, never to be forgotten. So proud to have known her. My sincere condolences to her whole family and to all who were blessed by her friendship.

Gwen DeMilta didn't know me from Adam, but when I approached her ringside at a large show in Florida a few years ago, asking some questions about judging Dobermans, she graciously had me sit down beside her in the golf cart and proceeded to do a fabulous ringside mentoring during the entirety of a very large entry. Later she rounded up a few dogs for me to go over so I could see and feel the finer points of head, shoulder, tail set and bone. Her love for the breed was quite clear. I also discovered a dear soul within that imposing exterior. I am sorry she has passed. The dog world was so lucky to have her.

I did not know Gwen well, but it was my honor to have known her.  She set the standard. Godspeed.

This one really hurts, because her loss is felt so far and wide. Although I didn't know her personally, I loved watching her show her Dobies. I watched her a great deal at shows in West Springfield, Massachusetts.

She was a bona-fide powerhouse. And her daughter is cut from the same cloth.

I will never understand why people like this have to leave us so soon.

I always looked forward to seeing Gwen at the show. We would exchange good and not-so-good views and enjoy the day.

Gwen always had a great smile, and she loved showing the dogs. Win, lose or draw, she accepted the day’s judging and went on her merry way. I will miss her, as with many others who have passed all too soon.

My condolences to her family.

I always enjoyed seeing her work with her dogs. She would gladly offer advice to anyone. A real professional.

My friend and I used to help Terry Hundt sometimes up at the Doberman ring. We'd hold dogs or help her switch them to go back in the ring – all very daunting for these Pembroke girls! But I remember how absolutely intimidating Gwen was up at that ring showing her gazillion Dobermans. I was completely afraid to make eye contact with her for fear of reprisal about something. We'd watch Gwen in the ring, as she was a masterful handler and the dogs loved her; she showed them to perfection.

I will miss her terribly, and my heart goes out to Rissa and her family. We're still here showing Pembrokes, but there's one heck of a dog show going on in Heaven.

© Dog News. This article may not be reposted, reprinted, rewritten, excerpted or otherwise duplicated in any medium without the express written permission of the publisher.
Fri, 04/08/2022 - 5:28pm