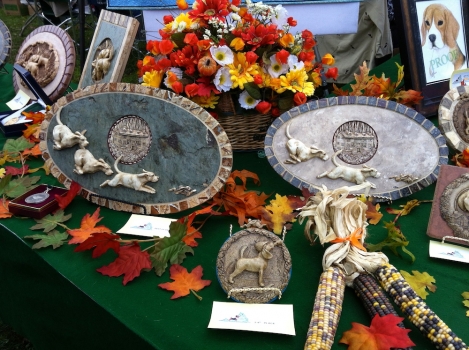 Beagles trophies were a huge hit two decades ago.

What is the best — or worst — trophy you have ever won?
By
Eugene Z. Zaphiris

The worst was a small paper bag with a box of 10 Tylenol in it! The best was a bronze dog figurine.

I attended the English Setter national in 1975 in Minneapolis. The trophies on one day, which may have been a local specialty, were cow-pie pen sets. Cow poop set in some acrylic substance with a pen stuck in it.

A glow-in-the-dark poster of a wolf in snow was an actual Group 1 trophy won by one of my Dalmatians in the 1980s. I won't mention the club, but I'll never forget it!

The best trophy my dog ever won at a dog show was a jumper-cable set. Believe it or not, I helped several friends and even myself out with those. In fact, I carry them in my car to this day, nearly 12 years later!

Got to say, the weirdest trophy I saw was the “Keychain Bottle Opener” … for JUNIOR SHOWMANSHIP!

A ceramic nightlight of a pink and green dinosaur coming out of a blue egg.

Those amazing trophies [pictured at the top of this web page] are resin castings and stone done by Regina May of Aurora, Colorado. Regina did the trophies for three Beagle nationals. These were for the 125th anniversary of the National Beagle Club and featured the historic building and log cabins of Institute Farm, home of the NBC in Aldie, Virginia. She had done them for us the previous year, and then for our Tucson national the following year, 2013, customizing for the location by framing the pieces on old barnwood with cactus and other location-appropriate decoration. Sadly, she’s no longer doing them. Best trophies ever!

My girl was awarded a lovely English bone-china tea set in 1993 for the first all-breed BIS win in Canada by a Portuguese Water Dog. We enjoy it to this day.

The worst trophy was for a Group 1. It was a fancy gumball machine converted to hold dog biscuits. It would have been cute for the dogs, except the lever was replaced with a large plastic femur bone!

Believe it or not, the best trophies I ever won were breed prizes: stainless-steel dog bowls awarded at a Utah show cluster years ago. Useful and regularly used every day. Each time I wash or fill them, they bring to mind the dogs now gone that won them. Sweet memories.

I really do not like the silver-plated things that turn black. Or the tiny towels with the club logo on them that cannot do much of anything.

I do like things that are useful. A gift card to the vendors would help everyone. Presently a gas card would be great!

© Dog News. This article may not be reposted, reprinted, rewritten, excerpted or otherwise duplicated in any medium without the express written permission of the publisher.
Fri, 10/14/2022 - 11:25pm