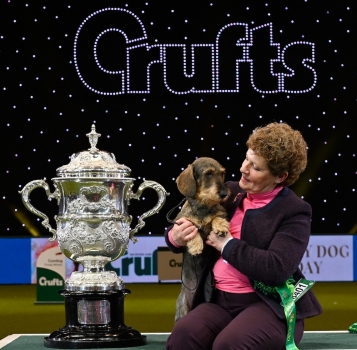 What is your favorite memory of Crufts?
By
Eugene Z. Zaphiris

Being able to attend in 2003, even if my dogs couldn't (although invited)! What an amazing venue and show. The hardest part was having my breeds at the opposite ends of two different halls and both showing at the same time.

The first time I attended Crufts, I carefully planned what I might look for: a dog that I just could not come home without and any collectible that I thought was either not available here at home or was priced so that I could simply not leave it! I took one suitcase with me.

My breed was exhibited on the second day and I used the first day to shop. Wow! Never in my life did I imagine there could be that many vendors! Forget about “I'll keep that in mind and come back,” as you'd never find that booth again. I ended up buying another suitcase to bring home all my loot!

As for the dog I couldn't leave behind, I found him and made an agreement to lease him from the famous Jaeva Norfolk Terrier breeder Martin Phillips. A big part of my plans was to meet and visit as many of the well-known Norfolk breeders as possible, and I had the unforgettable opportunity to meet several, including Joy Taylor of Nanfan, Cathy Thompson of Belleville, Rita Mitchell of Richell and Lesley Crawley of Ragus. I got to go over their dogs, make tons of notes on them, and came home with information that helped my breeding program. I arranged to have semen shipped from several dogs that I saw and knew along the way in my breeding program I was going to want to use.

I made new friends, saw the dogs behind mine in pedigrees and was very thankful these breeders shared their breeding philosophies with me. What an enriching trip it was for me!

The year is 1967. Waiting, waiting at home for news of the Standard Poodle judging. Cable arrives. Tramp (Can Am Eng CH Bibelot’s Tall Dark & Handsome) won the breed. A few hours later, another cable. Tramp won the Utility Group. A third cable: Tramp Reserve Best in Show! This was most definitely a first for a dog from Canada or USA. I can still watch the judging on the Pathe news clip.

I have favorite Crufts memories, besides winning more than I could have ever expected. Since I was showing my Pembroke bitch, Deidre, I had a few days to just watch, with Pastoral on the second-to-last day. The first day I watched, it took almost the whole day before I realized the red ribbon is what I wanted, or good. I chuckled to myself once it hit me.

My second favorite memory was from the group. I don't remember the name of the judge, it was a woman – anyway, we were the last dog in this giant Pastoral group, and the judge walked down the entire line looking at fronts and heads, when she got to me, she slapped my hand (which was baiting) out of the way, so she could see. Greatly intimidated me. We ended up Reserve in Group, and of course to get to the group, we won a monster breed from the Open bitch class. Great memories!

Having tea in the morning with Leslie Boyes. Perfect way to start the day.

I was privileged to judge the international children’s handling at Crufts with young people from 32 nations competing. To listen to them at their banquet explaining their involvement with the sport and then be able to adjudicate their expertise was indeed a highlight not only of Crufts, but of being involved with the sport.

The first was discovering the spectacular and ultimately influential English Ch. Barnesmore Red Rose At Palmik and convincing her owners, Mike and Yvonne Howgate of the famous and wildly successful Palmik Whippets, to lease her to me.

In the end, they gave her to me in exchange for Ch. Merci Isle Magnolia, who became the first and only American-bred champion in the US and the UK. She was made up quite quickly, with four CCs.

My second best memory was being asked by Mike and Yvonne to exhibit Magnolia myself on the green carpet in 2013.

In a life full to the brim with stellar accomplishments, this one was my best Crufts bucket-list moment!

Probably 18 to 20 years ago I was standing ringside at Crufts watching Pekingese. I heard my name called and turned to see Mr. R. William Taylor sitting with Mr. Ed Jenner and Mr. Luc Boileau.  Always the gentleman, Bill said, “Please, come sit with us.” I don’t think I said ten words in the next five hours, but Iearned more about the breed in those five hours than in the past five years. Godspeed, Bill and Ed.

My fondest memory of Crufts hasn’t happened yet.  I have been honored with an invitation to judge my own breed, Dandie Dinmonts, in 2022. It will be the thrill of a lifetime. Assuming and hoping Crufts will not be cancelled again.

2015 is a year I will never forget. I had planned to just show “Knopa” (GCH. McVans To Russia With Love) for her last time before she would be headed home with her owner Marina Khenkina. Little did we expect her to not only win the breed under esteemed judge Geoff Corish, but on to win the Terrier group under Martin Phillips, and the next day Best in Show under honored judge Mr. Ronnie Irving. If that’s not a memory, I don’t know what is!

This will take you back a while … The 1972 BIS finale was one of the most beautiful ever. Not in the quality of the dogs, although I’m sure they were outstanding, too, but the pair that were selected for the top spots left an indelible memory. They were a study in sleek, smooth, complementary outlines: the white Bull Terrier who was ultimately BIS, Ch. Abraxas Audacity, and the silver-colored Whippet Ch. Dondelayo Duette, Reserve BIS.

It didn’t hurt, of course, that this happened while Crufts was still held at Olympia in London - a much more charming venue than the National Exhibition Centre in Birmingham, but of course also really dirty. (I’ll never forget the combined smell of sawdust, dog urine, chalk and weak tea that pervaded the whole building …)

I’m sure it also helped that I knew, then or later, both owners, who in true British style also showed their own dogs: Miss Drummond-Dick of the famous Abraxas Bull Terriers, and Anne Knight, who was probably the most intelligent Whippet breeder anywhere, ever. She was having a tremendous run of success with her Dondelayos then and was also an excellent judge. (What a pity she never got to officiate in the U.S. She had accepted to judge at Santa Barbara in 1988 but died prematurely before she could fulfill the assignment.)

A couple of the other Group winners would, I am sure, have made worthy winners, too: Andrew Caine’s record-breaking Cocker Ch. Dreamridge Delegate (imported from the U.S.) or the famous Pem Corgi Ch. Kaytop Marshal. I had to check my records for most of the Group winners, but I’ll never forget the white Bull Terrier and the silver Whippet.

© Dog News. This article may not be reposted, reprinted, rewritten, excerpted or otherwise duplicated in any medium without the express written permission of the publisher.
Wed, 03/24/2021 - 9:54am