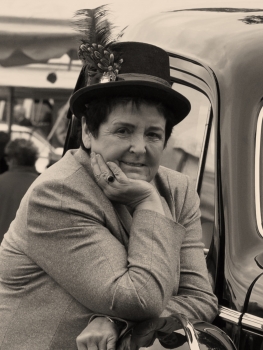 What is your favorite Morris & Essex memory or photo?
By
Eugene Z. Zaphiris

Even though I now reside in the Midwest, Morris & Essex has been part of my dog-show life ever since my teens. My father originally lived in New Jersey, and even though we lived in New York City, attending the Morris & Essex show at the polo field in Madison, New Jersey, was an annual “must.” My dad was not a dog person at all, but he considered M&E to be the only socially acceptable dog show – even over Westminster! (He had even taken 16 mm movies of one of the early shows in the 1930s.)

Anyhow, I got my first “show dog,” a black (American) Cocker Spaniel bitch in January 1950 and showed her myself in a Puppy Bitch class of 17 at the May 27 show that year. We didn’t place, but her litter sister won the class!

I still have the old black-and-white photos I took with my Kodak camera of the Cockers that day, the show ringside just packed solid with spectators. The show catalog was classic, always with an orange cover, colored dividers ahead of each group’s entry listings, and formal photos of each judge preceding his or her assigned breeds – a real collector’s item for those interested! And they usually sold out completely! I still have several of them.

I really can’t remember much more about the show, as I was smitten by Cockers back then, but we always stayed for Best in Show judging, and then the challenge of finding the car in the parking lot for the ride home.

So when Morris & Essex was revived 20-plus years ago, I was delighted and was able to join. I managed to attend at least once for old time’s sake. Just wonderful!

For this one, well, my spirit is willing, but the body is not, so we will try to pull up AKC.TV on the computer and watch the grand finale instead!

My favorite memory of each of the recent Morris & Essex shows – 2000, 2005, 2010 and 2015 – is the 6 a.m. sunrise at beautiful Colonial Park, with the show committee at the ready to greet participants, anticipating what we know will be a unique and fantastic day.

Here I am at the last Morris & Essex, near the vintage cars. This year, I plan to be a bit more vintage and "foxy."

© Dog News. This article may not be reposted, reprinted, rewritten, excerpted or otherwise duplicated in any medium without the express written permission of the publisher.
Mon, 09/27/2021 - 6:43pm