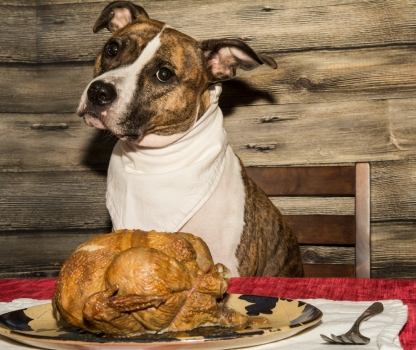 What was your most unforgettable Thanksgiving experience?
By
Eugene Z. Zaphiris

When I was a child, dogs were allowed to roam free. Thanksgiving night, I opened the door to let my "best friend" outside, and she disappeared. Hours later, there she was, dragging a 26-pound cooked turkey up our snow-covered driveway. I am sure the neighbor who owned this turkey will never put one out in the garage and leave the door open again!

Thanksgiving cluster in Springfield 1992: It was snowy and sleety outside. My husband, John, is allergic to dogs… indoor shows with all that grooming and blow dryers trigger his asthma.  So he went outside for a smoke. He could hardly breathe with the weather and asthma, but he inhaled as best he could … He came back inside and said, “I think I’m quitting smoking.” Never touched another cigarette.

My most memorable Thanksgiving was the year my Bungee (Ch. Danikk Leap of Faith MH) was successful at counter cruising and consumed fully one half of the thawed turkey while I retrieved other items from the cupboard. My family guest didn’t want to eat a half-eaten turkey, so we had spaghetti instead.

Because of the number of people, we chose to do a buffet dinner and had all the food on large, banquet-style tables in the patio room. All the dogs (Great Danes) had been confined to the living room while folks got their food and ate.

After dinner, all the food, including the turkey, was left on the buffet and just covered up so folks could go back for seconds and thirds if they wished, with the doors to the patio room closed but not locked.

Most of us had migrated to the playroom to play pool, and the dogs were released from the living room to join us.

As we were playing, I happened to look up from my shot to the doorway, and lo and behold there was my Eddie, standing there with a giant smile on his face and an enormous drumstick in his mouth. His eyes were just saying, "Look what I found, Mom." I will never forget the look on his face, he was so proud of himself. Apparently, he had pushed the patio door open, found the turkey and grabbed his drumstick from under the cover!

For fear of him eating the bones, I immediately dropped what I was doing, ran to him and took the drumstick but had him follow me to the kitchen where I took all the meat off the bones, put it all on a plate and placed it on his table for him to enjoy.

That was more than 30 years ago, and I remember it like it was last Thanksgiving.

Thanksgiving 1991 was the most unforgettable! We took our four children to New York. My oldest daughter was a high school cheerleader, and her team was participating in the Macy's parade. Add to that the Statue of Liberty, Ellis Island, three Broadway plays, a Knicks game, Central Park, museums and a very untraditional Thanksgiving dinner in Little Italy, and it made for a truly unforgettable Thanksgiving week.

I remember the owner of the Italian restaurant brought our wine to the table and proceeded to place wine glasses in front of my teenagers. My youngest said, "I'm not old enough," to which the owner responded, "If Papa says you're old enough, you’re old enough." Gotta love New York! Happy Thanksgiving to all!

One year my crazy aunt made a big batch of peanut-butter fudge for a pre-Thanksgiving party. It was so bad it was deemed inedible – and that's saying something for my family – so auntie threw it all in the trash.

Our family Dachshund waited until the dark of night to carefully dig it out of the trash can. She ate so much that she provided the festive entertainment for Thanksgiving by frequently trying to divest herself of the fudge all day. Apparently, she didn't want any going to waste, either, because for a long time afterward we continued to find fudge that she had hidden in our chair cushions, etc., so it turned out to be the gift that kept on giving.

We had a number of memorable Thanksgivings spent in a friend’s trailer on the grounds of the Springfield, Massachusetts, dog shows. Not only Thanksgiving Day, but lots of leftovers to share thereafter. It was lots of fun.

Forgettable would be a better word. I was young, had just moved into our very first home (in the country) and had my first Great Dane champion.

My family decided that, since I now had my own home, it was time for me to take over hosting the Thanksgiving Day feast from my aging aunt. It was a huge undertaking, as my aunt was the original "Martha Stewart” type, and her Thanksgiving table looked like a photo in Gourmet magazine. After weeks of preparation, the turkey (my first attempt) was in the oven, and the house really began to take on the lovely odors of Thanksgiving. I was told to take the turkey out of the oven and let it breathe on the counter. I know that I pushed it waaay back, so that my counter-surfing Great Dane could not reach it.

The table was being set by my husband and young son. I went in to supervise. Out of the corner of my eye I thought I saw a turkey trot by! I went to look and there it was, in the mouth of my Great Dane quickly sneaking to her bed.

It took all three of us to extract the bird from her jaws. Whew! It was still in one piece. Now what? My family was about to arrive, and I had a slightly "wet" (dog people will understand my description) turkey, not to mention that my aunt would be scrutinizing my work.

Well, what would a true dog person do? I took it over to the sink and washed it! Stuck it back into the oven to dry it. When the family arrived, there it was ... a beautifully browned bird, now filled with stuffing, on a lovely platter. My young son was threatened, on pain of death, to keep silent!

This is the first time that I have ever revealed what happened, and my son is now a married man. I hope nobody in my family reads Dog News!

P.S. That was my first – and last – hosting of such an important event. I became an AKC licensed handler and, to this day, I thank God and the AKC for dog shows far from home on Thanksgiving week!

We have fond memories of the shows in Arizona during Thanksgiving weekend. The drive from Minnesota was not always great, Thanksgiving dinner with John and Sandy from Onofrio was always special, two Old English specialties, and warm weather for a change. Top memories in the Sugarbush travels.

In 1995 we got our first Corgi from Corgi rescue. (Previously we had sweet Collies.)

That first Thanksgiving, she had only been with us a few weeks. There wasn't room in the fridge, so we put the 9 x 13 pan of strawberry JELL-O with sour-cream topping outside on the picnic table, covered with foil.

Went out to get it, and there was “Eliie” standing in one half of the pan while chowing down on the other half. She looked up at me, her white paws and muzzle all red. I wish I had a picture, no cell phones then.

That was the beginning of a 15-year relationship that made me fall in love with Corgis.

When my husband worked for site control, we would have a huge Thanksgiving dinner for everyone and sit down as one big family at Howard County. Friendsgiving is the best with your dog-show family.

My mother was known for her pies ... especially her crust.

We lived in a small house in an idyllic town in Baltimore County. Adjacent to the living room, there was a tiny porch, which had been closed off with windows. It was on this porch where she had placed her pumpkin pies to cool.

After dinner, my mother asked me to bring in the pies.

In a loud and obnoxious voice, I said, "Mommy, Gretel loved your pumpkin pie filling but NOT the crust." Yelp, our standard smooth Dachshund, had crept into the porch while my family and our guest were having our Thanksgiving dinner and licked clean the pumpkin filling from both pies!

Best Thanksgiving? I attended a dog show and did not cook a thing! A double win!

The show was in Massachusetts, I believe. It's been a while – maybe 20 years?

Everyone had a fine day, and boxed Thanksgiving dinners were passed out, which were delicious. With all my Thanksgivings lined up – and there are many – this one, showing one of my dogs, was the best!

© Dog News. This article may not be reposted, reprinted, rewritten, excerpted or otherwise duplicated in any medium without the express written permission of the publisher.
Sat, 11/20/2021 - 1:37pm