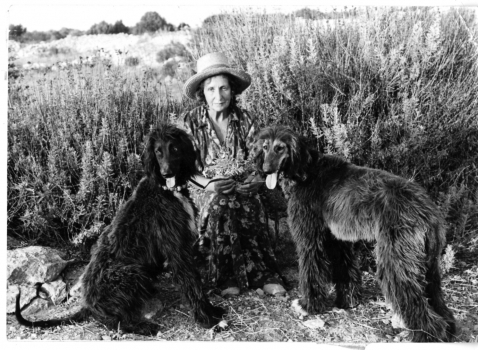 Juliette de Bairacli Levy and two of her Turkuman dogs. While you may note the difference in eye color, she didn't.

The Eyes Have It

The furthest thing from my mind is to attack that hallowed document: the standard. It’s a really good one. Still, it’s possible that some points of our “Bible” bear a second, or third, look — not unlike that other Bible you know so well. In my case, not so well.

Approaching any subject from a different angle, considering information from different knowledgeable sources and maybe a little head scratching in between, may crack the door open to an “aha” moment or two. Food for thought, at least. You be the judge. Even if you aren’t already one.

Dovetailing off my last article, “What the Standard Doesn’t Tell You,” I draw again from Dr. Dan Belkin’s coursing observations, adding the expected two cents of my own, and ending with an interesting, if ancient, historical moment with Juliette de Bairacli Levy (Turkuman), one that I was privileged to be a part of, and which, incidentally, couldn’t be more pertinent to the subject if I’d simply made it up to gild the proverbial lily. (I didn’t. Never would.) Note: Juliette was active and present in England when the revised standard was written in 1948. The original was written in 1912.

So, the subject? I’m zeroing in on the eye of the Sighthound, specifically the Afghan Hound as per the standard — color, history and, although it should be obvious, function — although therein may lie a rub. The function is subject to permutations. After reading Dr. Belkin’s analysis, one that applies to eye function in general, you’ll see what I mean.

Here’s what the standard says: “The eyes are almond-shaped (almost triangular), never full or bulgy, and are dark in color. …” Faults: “… eyes round or bulgy or light in color ...”

Seems pretty clear. Pretty simple. The function of the eye, however, is not quite so clear and simple. Think about it from Dr. Belkin’s perspective after you consider what he says. Then Juliette’s. (For those who missed the previous article in which I referred to Belkin’s research many times, you might want to look it up. His credentials are compelling. His logic makes sense. Although his main reference is the Saluki, as with my earlier article, I take the liberty of paraphrasing and broadening the findings to include Afghans, since the breeds derive from similar, if not the same, origins.)

Here’s what he says: “The eye is an extremely complex piece of equipment. As an embryo develops, the formation of the eye depends on a large number of different genes … If one tiny thing out of maybe 300, goes wrong, the eye doesn’t work as well … Any kind of animal [in this case, Sighthound] that is not being selected for its eyesight over a long period of time will lose this genetic information through random mutation and will thus lose the ability to see. Look at cave fishes … If we just breed to have pretty eyes in the show ring, soon they won’t even be able to see their quarry, let alone chase it. If all we are interested in is having beautiful, dark, almond shaped eyes, that’s fine, but if we want them to retain what they were originally bred for, then somehow or other we have to select for visual acuity. That’s harder to do … We [Belkin and his wife] have coursed notably light eyed and quite dark eyed individuals, and I haven’t noticed any obvious difference in their visual acuity.”

My two cents: If, as a judge, you come across a light-eyed dog of competitive quality, consider this: Don’t hold too tightly onto your love of, commitment to, or even simple preference for, dark eyes. You might end up throwing the baby out with the bathwater. And wouldn’t that be negative judging — something AKC directs us not to do? Food for thought, that’s all. And consider the following history lesson …

In the ’70s, I had the good fortune of meeting Juliette de Bairacli Levy, world-famous author and herbalist and the English breeder of Turkuman hounds who exported Ch. Turkuman Nissim’s Laurel to Sunny Shay in 1950, after which he figured into many Grandeur pedigrees. (“Caftan,” as he was called, won the Hound Group at the Garden shortly after he arrived.)

We, Juliette and I, both happened to be in San Sebastian, Spain, at the same time — her to survey a litter of pups she had bred; me to, well, just be in Spain. 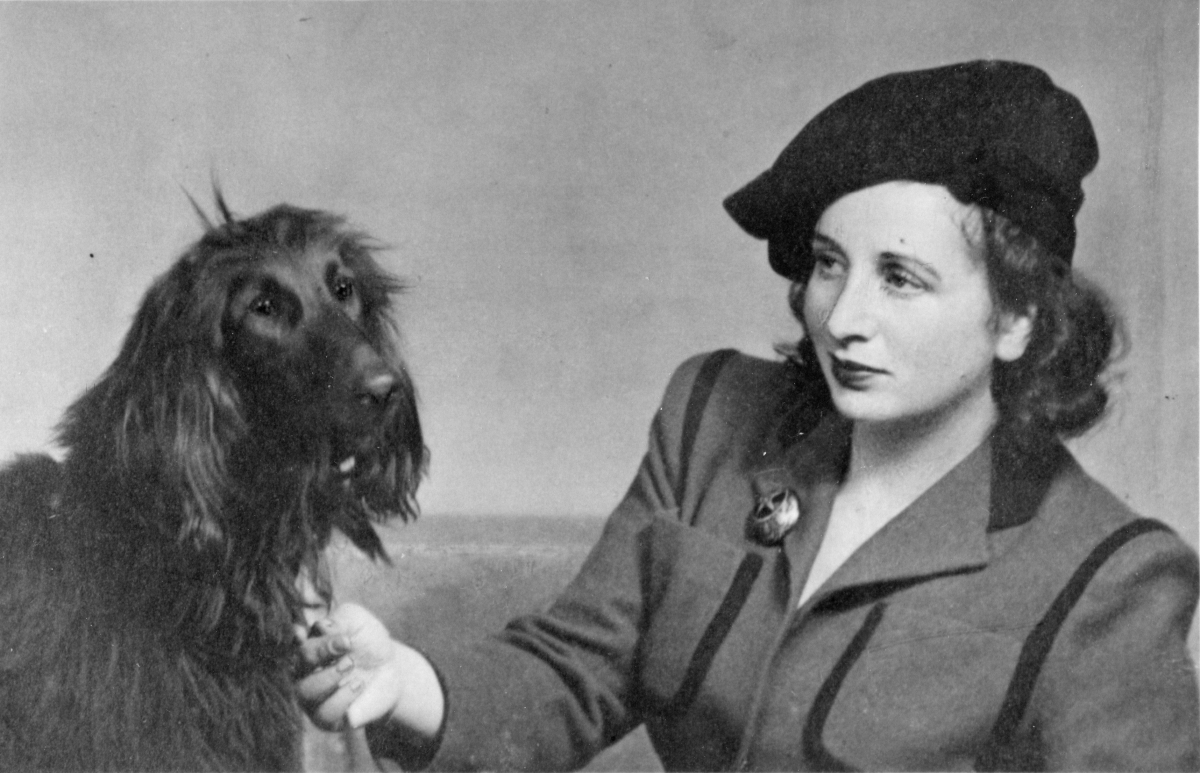 When offered the opportunity to meet her, I readily accepted, having no idea what to expect, legendary figure that she was in my world. Curiously, I had never seen a picture of her and didn’t know exactly what to expect in terms of her appearance — or anything else about her. She was English. So, tweedy, dowdy, possibly a bit overweight? But no. Was I surprised? Delighted? Understatements.

She was petite and a little stooped, stepping out of the front door to greet me dressed not unlike a gypsy, wearing colorful fabrics in varying, unmatched patterns put together in what couldn’t have been further from the traditional English look I’d projected. Tweedy? Dowdy? Not in the least. My continuing delight came when she spoke — the most beautiful, articulate, aristocratic voice I’d heard from a dog person. Reminiscent of Dame Edith Ashcroft. I fell in love. With her and everything she subsequently said. (Except — she kept calling me “Mr. Souza.” I felt old. And I wasn’t. Yet.) 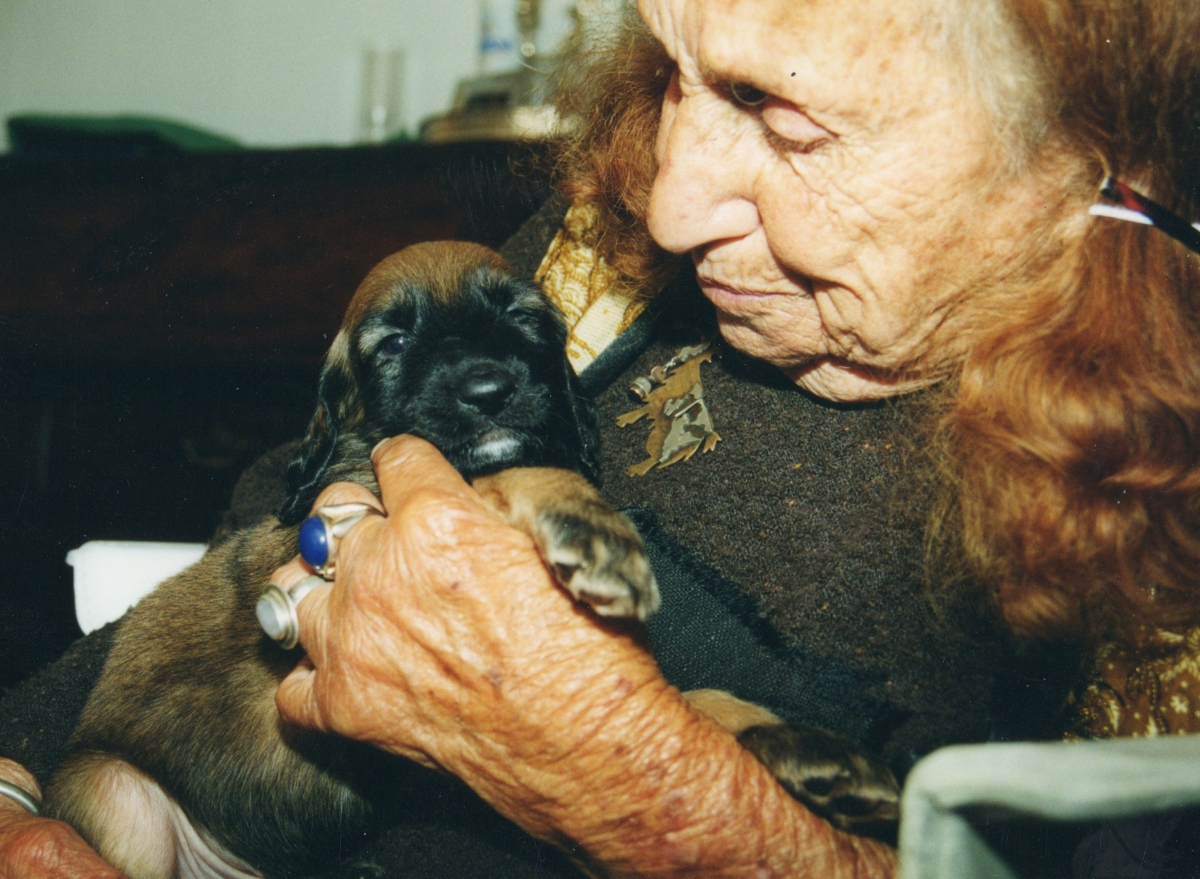 Over the course of the next few hours, we would speak, of course, of many things dog related. First, however, I was to meet the sire. She was excited about the litter, as eager and enthusiastic to show him to me as I was to see him, a big, blustery, blacked-masked red that was racing back and forth in a large paddock on a hill behind the house. When we approached, he charged up to the fence with fire in his eyes — his big, yellow/orange eyes. I bit my tongue.

After a bit of verbal dancing between us about his obvious attributes, hemming and hawing, I found an opening to ask — as diplomatically as I could find words for — “What do you think about the eyes? The color, I mean?”

Her response, I would learn, was quintessential Juliette. First, glancing over at the prepossessing male, almost under her breath she gushed, saying as much to herself as to me and not as a question, “Isn’t he magnificent!” Then she turned toward me and looked me squarely in the eye with an almost bemused, child-like expression that I also came to learn was part of her persona. With soft, but matter-of-fact conviction, and the musical, mesmerizing voice I’d become so besotted with, she said, “Well, in their native lands the sheiks always prized the dogs with the light eyes. They were the best hunters, they claimed. The look of eagles, you know,” clearly having read the inference between the lines of my question.

Then again, to herself as much as to me, like she was revisiting something in the past, she said, her attention now intent on the sire that had posed at the top of the hill, surveying his domain, “The English decided the eye. Not the Arabs.”

© Dog News. This article may not be reposted, reprinted, rewritten, excerpted or otherwise duplicated in any medium without the express written permission of the publisher.
Tue, 04/12/2022 - 11:12am