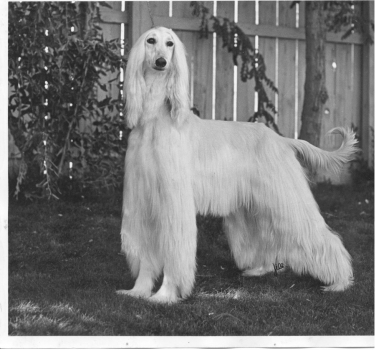 After re-reading the previous article I wrote in the May 28, 2021, issue, I realized I might have been misunderstood with the final point I was trying to make. When I said, referring to judging, “Never penalize a patterned dog,” the advice was prefaced with, “all things considered.” In that context I felt most readers would understand what I meant. But maybe not. So let me rephrase it here: “Never penalize a patterned dog/bitch for being patterned.”

The Facebook thread that article was based on — about the peculiarity of the Afghan coat pattern — had created a flurry on Facebook. Most of what went back and forth was, if not altogether pertinent, energetic and heartfelt. But, as Facebook threads do, the direction and tone devolved into something different from what I had hoped. Other breed details started coming into the conversations, and it became abundantly clear that some of the coursing enthusiasts who joined in got a little up on one toe as to what breed characteristics outweighed others. I get it. But their arguments have limits.

Curiously, my own thoughts on breed priorities and how I articulated them was summarily characterized by one coursing enthusiast in particular as “vague” and “flowery.” Hmm, I thought to myself, doing a quick mental inventory of the 13 or 14 or 15 — whatever it is — generations of linebred champions, SBIS and all-breed group and BIS winners, National Specialty winners, top producers, sires of significance, etc., our efforts —  Mike’s and mine —  had produced. I couldn’t for the life of me think of one that had ever been referred to as “vague” or “flowery.” Or were all those judges who handed out ribbons over the years thinking, “That’s a nice vague and flowery Afghan. I think I’ll put it up”?

Yes, there were a few flower names, including SBIS Ch. Coastwind Peony, who is pictured here. However, anyone who had firsthand knowledge of her would argue there was nothing vague or flowery about her or her sister, Coastwind Carnation, who went to David Roche’s Fermoy kennel in Australia, where she became an important female force in his pedigrees. Bred back to Ch. Coastwind Holyman, she produced the outstanding Aust. Ch. Fermoy Holy Joe. Nothing vague here.

Whether fan or foe, breeder/exhibitor or judge, to the best of my recollection, neither “flowery” nor “vague” were ever used to describe how all those dogs/bitches measured up to, in greater and lesser degrees, the standard. But, just in case I was unclear in the Facebook thread, let me get unvague and unflowery here.

I’m here to say, if your measure of the breed is limited to a stopwatch and a dead rabbit, you’re way off base. I’m also here to say, categorically, an Afghan is more than a fast dog — a conclusion I cannot take credit for.

The first sentence of the Afghan standard lays it out perfectly and sets the stage for describing the many fine (small) details, all of which contribute to breed type. I will even go out on a limb and say in my never-to-be-humble opinion, there is also an insinuation within the perceptive and imaginative among us that nuances exist in the breed that are NOT written. To wit: “pride of race,” “owning the ground they stand on,” etc., insights that have been passed down to us from some of the greatest breeders of the past — Sunny Shay (Grandeur), Kay Finch (Crown Crest), Babbie Tongren (Benghazi), Reigh Abrams (Dureigh), Lois Boardman (Akaba), to name only a few. The list is long. I can’t remember any of them disproportionately dwelling on catching rabbits.

So, here’s the first sentence of the standard: “The Afghan Hound is an aristocrat, his whole appearance one of dignity and aloofness with no trace of plainness or coarseness.” I have seen many coursing dogs that, as fast as they might be, show no resemblance whatsoever to that mandate. And again, in my never-to-be-humble opinion, I have also seen them look like a different breed altogether. Some, if I may be so gross, I would even call them “butt ugly,” bless their hearts. As Reigh would say — and did say many times, pointing out an example with her long, elegant finger — “I don’t know what it is, but it’s NOT an AFGHAN.”

As well as being a skillful, artful hunter (is “artful” too flowery?), an Afghans is — no, must be —  a thing of beauty. Of primitive, as opposed to cosmetic, beauty —  hard, dry and athletic. And it takes a certain degree of perception to get what this means exactly.

I do not — repeat, DO NOT — diminish the significance of coursing dogs, per se. Many of them have beautiful breed characteristics. But usually, to my eye, the balance of breed characteristics is out of kilter. I do concede that, as in all things, beauty is in the eye of the beholder. Like, some people think Melania Trump was a more beautiful and aristocratic figure in the White House than, say, Jackie Kennedy, right? The eye of the beholder thing. Nevertheless, at some point, the twain of coursing ability and the finer points of breed characteristics must meet. You can’t keep breeding for one thing over and over again with no vision beyond that. It’s like playing one note ad infinitum on the piano. Catch a rabbit. Catch a rabbit. Catch a rabbit. The goal has to be more. Any singular note needs to be elevated into a higher-toned, albeit unfinished melody, as breeding dogs always proves to be. And for dog breeders, the unfinished melody is working toward that illusive perfect dog, which includes, but is certainly not limited to, speed.

This makes breeding a give-and-take, back-and-forth struggle. Sometimes you risk giving up one thing to get another. And on and on. Nothing is guaranteed. But, to quote something I learned from another venerable Afghan Hound breeder of the ’70s, ’80s and ’90s, Margaret Hughes, “The farmer’s eye fattens the calf,” which is where, in my opinion, the nuances, and perhaps a plausible path, lies — the operative word being “perhaps.” Somewhere in those fleeting insinuations between what is written and what is intuited — in the farmer’s eye — may be the pot of gold.

Here’s where I add a word of advice. Keep in mind as you evaluate the breed (whether breeder, exhibitor or judge) that you don’t fall into the commonest of pitfalls. Which is? Don’t confuse what’s important with what’s impressive.  (I’ve straying a bit from the subject I intended for this article. Stay with me. I’ll get there. It’s that damned devolving Facebook thing. The little voice in me has to say more about it because, well, because I can. It’s my column. Anyway, it all needs to be said someway, somehow).

As I touched on in the first article, if “peculiar” is a tricky word describing the Afghan coat pattern, it’s not the only one. How about toplines? Do an experiment. Ask a dozen Afghan breeders, exhibitors and, especially, judges, to describe the correct Afghan topline. Dollars to donuts most, maybe all, will say “level.” Or, maybe, “level – like a tabletop.” How many times have you heard, “That dog/bitch has such a good topline. Perfectly level”?

But be advised: words matter. Except for one singular adverb these descriptions might be true. Take a closer read. The standard says “practically” level. So, what does “practically” mean? It continues by describing that part of the topline – the loin – which wants to be strong and powerful and “slightly arched.” Since this area is an integral part of the topline, breeders and judges need to not think of a topline as “level,” but practically level. By definition a “slightly arched” loin cannot make for a “level” topline. Too small a detail? Maybe. But, as we know, the devil is always in the details. And to quote the dean of American design, Billy Baldwin, “Detail is everything.” In Afghan Hounds, all of Mother Nature’s details matter.

Which takes me back to the coursers. Kudos to the coursing dogs! Check out a good one, and I’d bet even money it will have a strong and powerful, slightly arched loin. It’s what good running dogs have. It’s just that it can’t end with one or two things. Ignoring the small details, all of which together create “type,” is to have a veneered understanding of what the essence of the breed is. Ignore the details and, to re-state Reigh, “It’s NOT an AFGHAN.”

© Dog News. This article may not be reposted, reprinted, rewritten, excerpted or otherwise duplicated in any medium without the express written permission of the publisher.
Thu, 07/01/2021 - 11:03pm