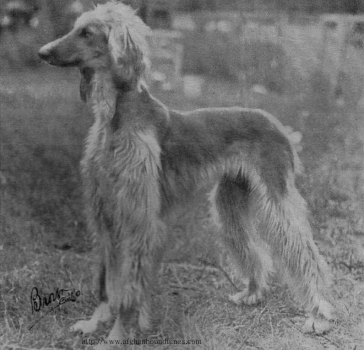 Begum, an early import and the first Afghan Hound to be shown at Westminster in 1934.

When first asked to write for Dog News, I had to wonder what I could say that hadn’t already been said. My conclusion: Nothing significant.

Which led me to the questionable inspiration for the above headline. Don’t get me wrong: It’s a euphemism that is in no way meant as an insult to those who love horses. Being a horse lover myself, I would never, ever, think of beating one —dead or alive. See it as a convenient literary device to, hopefully, catch a reader’s attention. Holding it (the attention), then, is a horse of a different kind.

So, where to start? And on what? Is there any possible way to add to the volumes of books, articles, debates, opinions, etc., on the only breed I can speak of with, if not authority, then certainly longevity, my history in Afghan Hounds dating back almost to the Crimean War? Actually, when I sit down and do the numbers, it’s only 58 years. And I will happily if not defer to, at least take into serious consideration, anyone’s opinion that pre-dates me on the subject.

I’m going to start with a few observations on coat since there has been a recent, fairly interesting thread of conversation about it on my Facebook page, the techno-coffee klatch of chatter that runs the gamut from babies (human and animal) to burials to about almost anything under the sun that won’t land you in Facebook jail. The conversation I speak of was precipitated by a photo I posted of a young, highly patterned male flaunting one of the first and most obvious characteristic of the breed described in the Afghan standard: a “peculiar” coat pattern, a look that combines with an “exotic” or Eastern expression, long silky topknot, prominent hipbones, etc., to create the wonderful sighthound we know as the Afghan Hound.

I want to take this “peculiarity” to a fictional dog show where the rubber hits the road and blue ribbons are involved. I think it’s safe to say the first thing you notice about an Afghan is the coat — peculiar or otherwise. And I think it’s also safe to say it’s the first impression made on a judge when a beautifully groomed, expertly conditioned, finely presented, mature dog/bitch enters the show ring. Especially if the exhibit is smiling and wagging its tail. Hard not to notice.

Now, picture this. Behind this exhibit comes another — equally groomed and conditioned, finely presented, maybe not smiling quite as much and the tail indicates he/she doesn’t necessary buy the whole dog-show thing, but with a coat pattern so “peculiar” (translation: sparse enough to be revealing) that the body under what coat there is is clearly readable — hard, dry and athletic. Capable of doing the job.

Add to this that the first dog, the fully coated one, is good, but under that beautiful coat from stem to stern, from top to bottom, a hands-on physical examination suggests that perhaps, he or she is slightly less capable of doing what coursing hounds are supposed to do. (I say perhaps because we would have to see them in the field to be 100 percent sure. But that’s not an option a judge can factor in here. It’s only what you see and more importantly what you feel.)

Here is where I submit that the first exhibit has the upper hand with the majority of judges, including breeder-judges and specialists, and will trot out of the ring smiling with the blue, or purple and gold, or whatever. Big coats and wagging tails prevail in the ring. Add money and momentum to this, and it’s a done deal. The “peculiar” is, well, too peculiar. (And then there’s Group judging, which is a horse of yet a different kind. We won’t go into it here.)

The closing caveat to the above, if there is one, is for judges who are not quite sure of what they’re doing, or have not been properly educated on the fine points of the very complicated Afghan Hound breed: All things being equal, never penalize a patterned dog. “Peculiar” may be closer to perfection than you think.

© Dog News. This article may not be reposted, reprinted, rewritten, excerpted or otherwise duplicated in any medium without the express written permission of the publisher.
Wed, 05/26/2021 - 9:02am