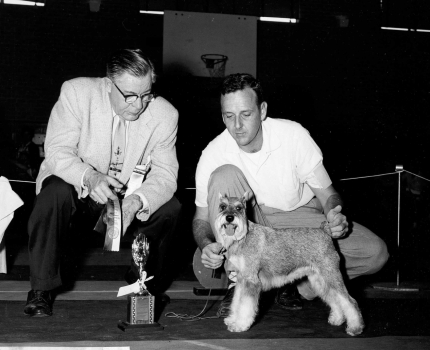 Thank you all for the vast numbers of cards, calls and other messages. There is no way that I could reply to all. I HAVE LOVED THE DOGS, THE DOG SHOWS AND THE PEOPLE. In my physical condition I could not do justice to the judging. I love you all and wish for the AKC's future.

This note, sent out recently by Bob Moore, stunned the dog world. A recent bout of very difficult health problems left Bob at the point where he had to accept the fact that judging was no longer possible for him. There are many pleasant memories about Bob — and plenty of good stories to tell. There are, of course, scores of people who recognize his name, as well as some who don’t know his story. It’s a good one!

Bob Moore is one of only a handful of judges who can be called “all-rounders,” judges who can judge all breeds, all groups and Best in Show. He reached that status in 1990 after judging for almost 30 years. Out of approximately 3,000 judges, only 23 are designated “all-rounders,” according to Ines Maldonado of Judging Operations at AKC. It is truly an enormous accomplishment. 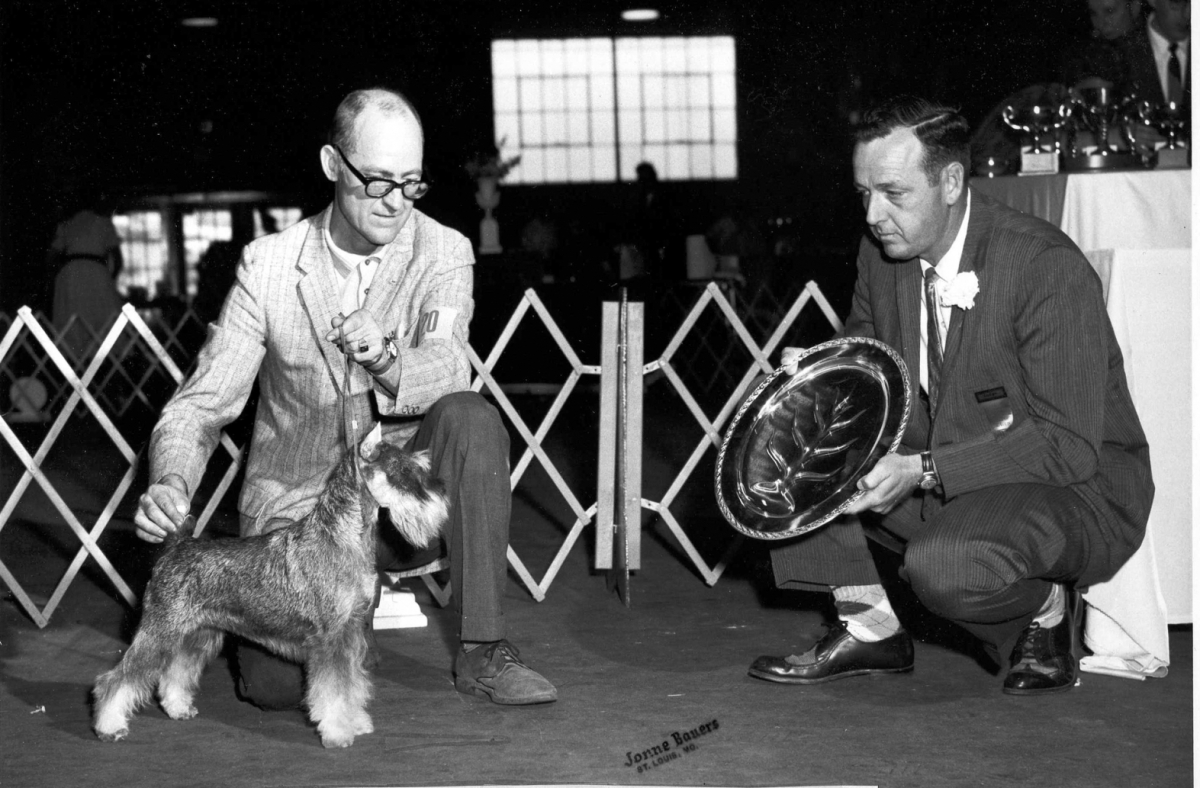 Bob started his judging career in 1960. “It took me 30 years to reach all-rounder status,” he told me recently. “I never thought about judging when I started showing. One day, AKC rep Billy Lang and I were talking at a show. I had been showing a Miniature Schnauzer bitch, and Billy was watching ringside. We were good friends, Billy and me. He asked me, ‘What’s wrong with your bitch’s rear end?’ I replied, ‘Nothing.’ I showed him where the coloring on her rear made her look cow-hocked.  Well, that impressed him because he realized I knew what I was talking about. He asked, ‘Have you ever thought about judging?’ Then he handed me an application and told me to fill it out. He observed me at three or five shows, told me to apply for more breeds. I got the Terrier Group first, then went on from there.”

Bob told me that he would listen to his reps, apply for more breeds when they told him, and co-operate. “They were all good to me,” he said. “Sometimes I’d want to apply for a breed, and I was told ‘not yet,’ so I just put in for the breeds they felt I was qualified for and things just kept moving along.”

Bob’s start in the sport was actually by chance. A young man during World War II, he was stationed outside Chicago. “Every day while I was on the train, I would see the most beautiful Boxer,” he told me. Moore was hooked — he wanted a Boxer. When he was discharged the first thing he did was look for a Boxer.

“Well, that was a tall order,” he said. “A good Boxer cost more than I made in a year.”  Finally, he found a deal. A family was forced to sell their Boxer because they had to move and couldn’t take the dog with them. “She was terribly undershot — not a good specimen,” Moore recalls. He suddenly started receiving phone calls from people he didn’t know, urging him to enter shows with his Boxer. Moore chuckled at the memory. “They were using me to build points, although I didn’t know it at the time.” That was 1949, and he was hooked on dog shows.

His humorous story reminded me of Bob’s reputation for always liking a good joke — always ready to hear one, and never without a good one to tell. Everyone knows Bob was always ready for a good laugh. I found out why. “I was a traveling salesman in the food industry,” he told me. “I worked for Kraft foods selling private-label shortening, oil and non-dairy creamer. I had dog friends everywhere.” He used his circumstances to learn, listen and help. In his 36 years being on the road, he helped form several all-breed clubs in various parts of the country.

Moore started his job with Kraft in 1951. As a young, new employee in his first week of work, he was shaken to receive a call to report to the senior vice president’s office. “I was certain I did something wrong and was going to be fired,” he recalled. “To my surprise, the senior VP wanted to talk about dogs!” The VP had heard Moore was breeding Boxers and wanted to purchase one from him.

That resulted in the establishment of Arekay Kennels, named after the boss’ wife Ruby Kirby. Working with the Kirby’s, Moore helped with breeding their dogs.  “I got a call one time to get a bitch bred in Michigan for the Kirby’s. I didn’t have the time to go up there,” Moore said. “So, I knew of a stud dog in Jackson, not too far away.  I took her there and did the breeding.” It turned out to be quite a decision. From that breeding to Ch. Turney's Whizzaway, son of Bang Away, came Arekay’s Jack of Hearts, a Best In Show winner. 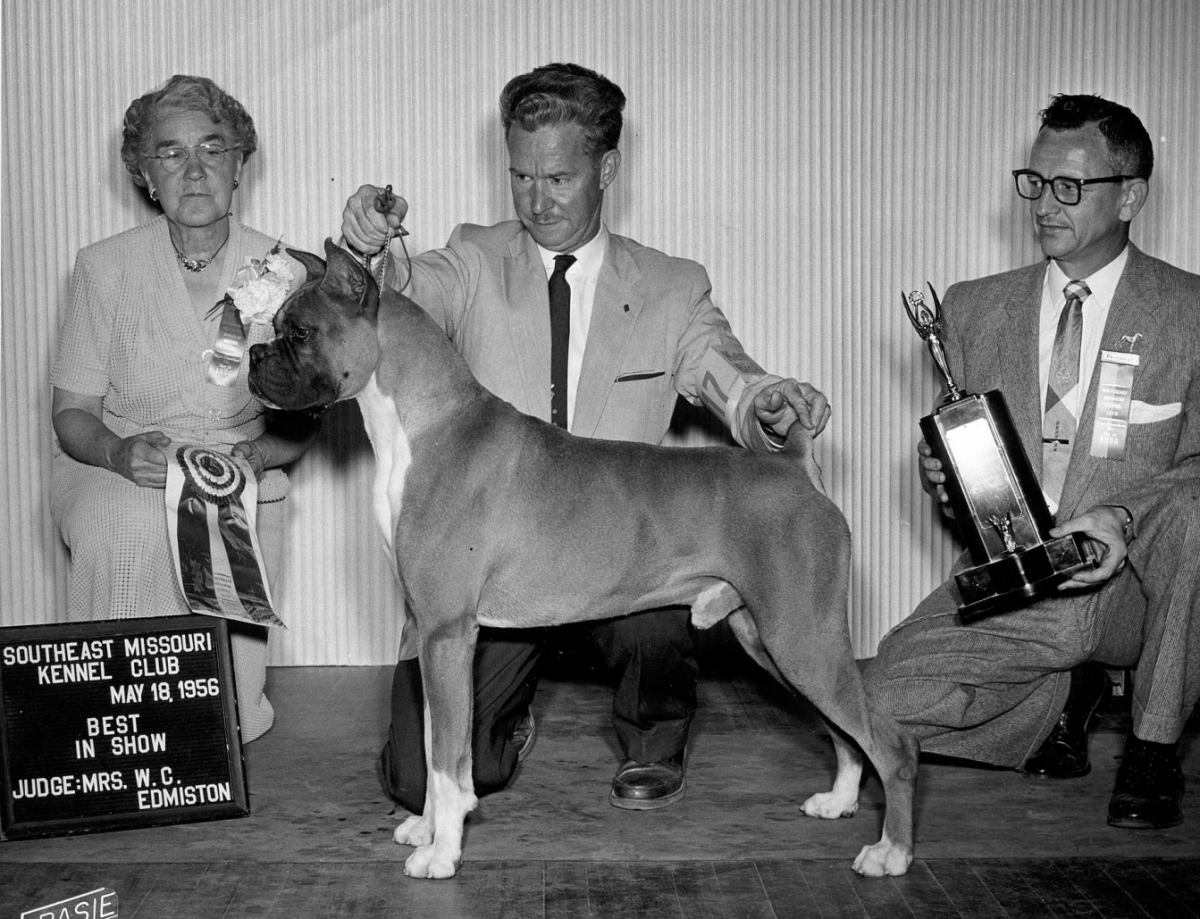 While he assisted with Arekay’s Boxers, Moore had now become infatuated with Miniature Schnauzers. “I saw them early on when I started showing Boxers, and I was hooked,” he remembered. He finally ended up with a really nice Schnauzer bitch from Benrook Kennels, Massachusetts.

Mac Silver picked the bitch for him — she put Bob on the map in dogs. It evokes a lot of memories. “Many of the winning Miniature Schnauzers today come from my lines (Bethel’s).” He shares one tip: “I didn’t keep stud dogs. For the price of a stud fee, I could get the best of anything in the world.”

Bob thought back over more than 60 years of involvement with dogs. “I loved judging. I learned a long time ago that I wanted to learn to judge the dogs on their quality without any other influences. All you can expect from a judge is that they know what they’re talking about. You have to have an eye for a dog, have stamped firmly in your mind what the standard for each breed is and judge accordingly.” Moore was a true breeder/owner/handler and he brought that experience to his judging.  “My background was never as a professional handler. I was purely a breeder.”

He had many mentors: “The Hearns insisted I learn how to groom properly. Rutledge Gilliland used to tell me, ‘You make sure you judge TYPE first. Don’t leave a question about what breed you’re putting up.’ Charlie Seaver taught me about sporting dogs. JJ Dunkin used to say in a thick Scottish brogue, ‘Judge the whole dog, and remember balance.’”

He suddenly remembers a funny story. “One time when I was judging, a woman handler who is now a judge brought me a dog that was snapping at me. ‘Do me a favor,’ she said. ‘Disqualify this one. If you do, I won’t have to show it anymore.’” Moore didn’t say what he did, but the story while humorous shows the other side of showing dogs — it’s hard work and not always the easiest.

What does Moore think of today’s exhibitors? You might expect to hear something like, “They’re not as good as way back when …” Instead, Bob shares some interesting insight. “People are doing a better job of grooming than they used to. Big kennels used to turn out a lot of puppies. Now, breeding programs are smaller and more focused. But, I still miss those old breeders that could talk dogs all day and night.”

Bob judged BIS at AKC/Eukanuba in December 2009 — it was his last assignment. He started to lose weight in the summer. He had pains in his shoulders and back. In November, he started blacking out, falling to the ground. His doctor couldn’t find anything wrong. Extensive testing finally revealed he has congestive heart failure, cancer of the lung, lymph nodes and bone cancer. At 84 years old, he said, “I want to be remembered as someone who knew what he was doing, and not have to be shuffled around.” He went on emeritus status recently. He’s keeping as active as possible.

Moore revealed something interesting. He learned to play the organ by ear about 20 years ago. “I still try to play every day,” he said. “I have a three-keyboard Yamaha. I’m not always up to it right now, but it’s something I enjoy a great deal.” 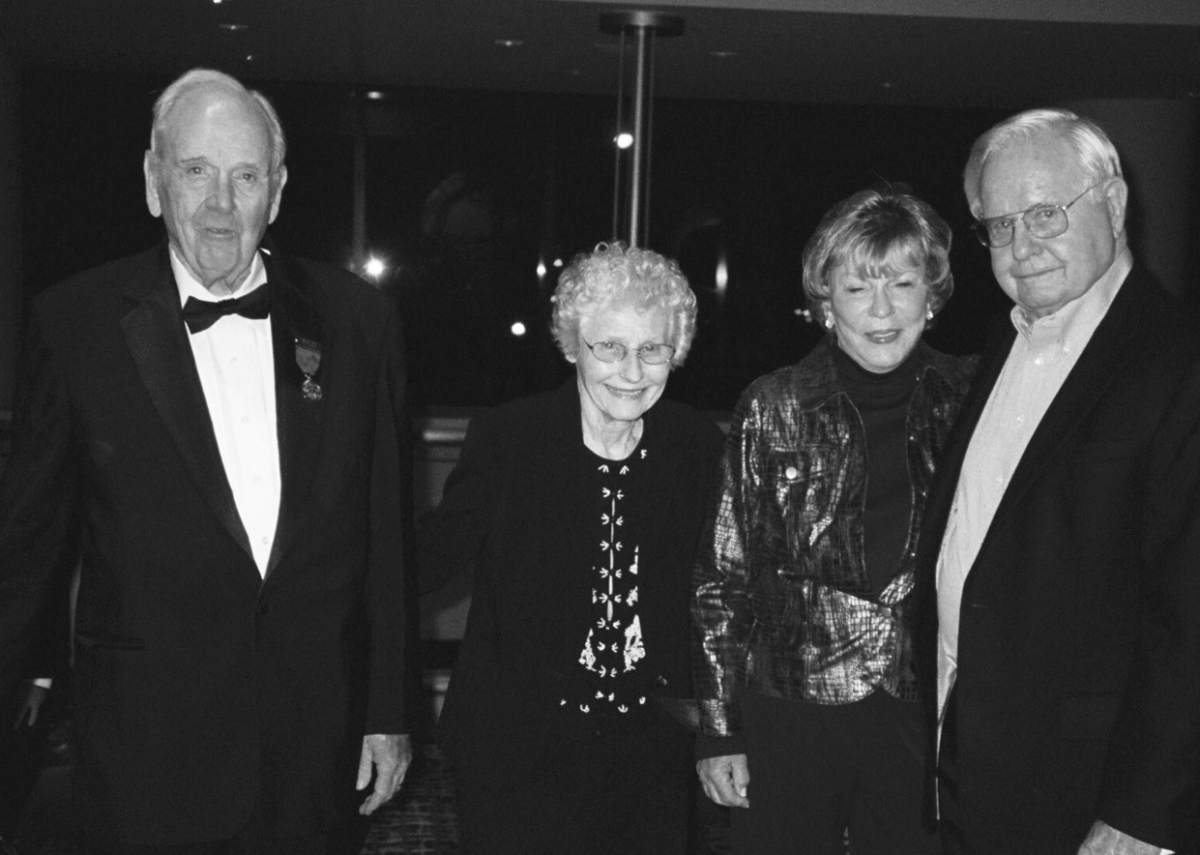 “I have had a lot of really wonderful friends in the dog game,” he commented. “My family is my other love. I was never sports minded. I enjoyed my family, my dogs, my work and my church.” Moore and his wife, Gene, will be married 62 years in May. They have two sons — one a senior VP of Sun Trust Corp., the other a retired deputy sheriff, now in security for colleges. There are also five grandchildren. Moore said they are a family of dog lovers, but were never interested in showing, as he was.

Bob, you are truly a treasure. Our thoughts and prayers are with you. Thank you for adding so much to this sport of ours.

© Dog News. This article may not be reposted, redistributed or otherwise duplicated in any medium without the express written permission of the publisher.
Fri, 04/02/2010 - 6:30pm