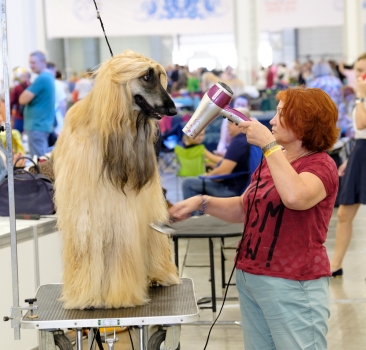 What Makes a Good Show?

I think by now we are all aware of the difficulties clubs went through as they tried to continue with their shows through the height of the pandemic. Although the need to be protected from Covid is certainly not over, most of the stringent requirements have been lessened, and shows are returning to close to their “normal” procedures. Kudos to all the clubs that carried on through the heart of the pandemic.

And now I think is a good time to look at the components of a good show.

Although, in truth, exhibitors who win will consider any show a good show – and to some extent it is, for them – there are other factors affecting the opinions of all exhibitors and whether they will return to the show the following year. For those who drive motorhomes, some factors are: What is distance from the RV area to the show building or rings? Is the RV area on gravel, grass or hard-pack, and will it turn to a muddy quagmire when it rains? Is there shade? Are power and water available and at what cost, and what are the distances between motorhomes?

Whether they have RVs or not, there are other factors that determines the quality of a show for exhibitors. Certainly, the perceived quality of the judging panel is a major factor, but there are many areas of the country (i.e., not the East Coast) where shows are somewhat limited and distances between shows may force an exhibitor to choose between a judge she may not particularly want to show to or not to show at all.

Exhibitors with medium- to large-sized dogs also like shows with good-sized rings. A great many of our shows utilize rings that are simply too small, and that makes it difficult for a big dog to be shown properly. (By the way, don’t say that this is the superintendent’s decision. The club HIRES the superintendent, and if he won’t do what the club asks, then get a different super.)

Obviously, it is true that the club cannot control the weather, but it can certainly make sure there is enough air conditioning or heat in the grooming and ring areas for the show. I also know that venues are limited, and many breeds like to be shown outside, but an outside ring for coated breeds in August is often more than too hot – it can be dangerous (for dogs, handlers and judges). Recently I have both exhibited at a show and some weeks later I have judged at shows that simply were too hot to be outside. As I get older, I will consider this aspect of a show before deciding to show or judge there.

To a great extent, professional handlers want the same things at a show that owner-handlers do, and certainly the distance from their grooming area and motor home becomes even more important when a handler might have 20 or more dogs to get ready and to show. Probably more than owners, professionals may prefer “clusters” rather than individual shows, and, in truth, this has hurt many smaller clubs and those in rural areas. When I started, it was the overwhelming norm to have two shows in a region on a weekend, and we often had to pack up after the first show and move to the next. Having shows at the same location is easier – and safer – for most of us. But the fact that clusters are more prolific than the two shows an individual club can put on over the weekend is simply adding to the over-abundance of shows. That is generally hurting entries at individual shows while contributing to the almost willy-nilly awarding of minor points.

And what makes a show enjoyable to a judge? Certainly, above all else is the quality – and depth of quality – of the dogs a judge gets to adjudicate. As I stated before, I believe that we have too many shows, and this affects the quality at any individual show. Communication with the show chair or hospitality chair is essential. There is little that is more annoying than to be hired and then not hear anything from the club about transportation, hotels, venue, etc. The judge is just expected to appear on the day of the show. Yes, it happens.

The choice of the hotel for the judge is important. Recently I judged for two different shows that had the judges stay at a hotel that was a 45-minute drive from the show site, but this was done because there were very limited hotel and restaurant choices nearer to the show. So the clubs made the right decision, and saw to it that every judge had proper transportation and knew what those arrangements were. Thank you. It is important to either have a restaurant in the hotel or one within very short walking distance – remember, the judging community is graying. There have been many times that I have heard of judges stranded at a hotel that did not have an operating restaurant– without a car. This is not the proper way to diet after working all day.

The overuse of judges by some shows borders on abuse. Expecting a judge – of any age – to judge 150 to 175 dogs plus two regular groups and two to three NOHS groups is abusive, and, yes, it happens much too often. Experienced judges are usually expected to judge 25 to 30 dogs an hour. It is not unusual for less experienced judges to judge at the rate of 20 dogs per hour. The average group judging takes 25 to 30 minutes, and the time for a Best in Show is about 15 minutes. So, if we look at the entry, we can calculate the length of a show, and there is not always a lot that can be done about it. Show chairs should also tell the superintendent that if there is a concurrent specialty – or any specialty – involved, the judge should be given a little more time.

It has gotten to the point that when I am asked to judge, I tell the club that if I am asked to judge NOHS that is fine, but I will not judge more than one NOHS group or NOHS Best in Show each day. As one person said, “I guess my point is, please utilize the talent you have correctly. Stop running our older judges to the ground. Let go of the purse strings and hire some non-all-breed judges!” Also, please consider that there are probably many people – often local – who would love to judge NOHS (for no fee), and can use it as part of their requirements to be approved for more breeds.

Some of the over-the-top amenities I have received and that are always appreciated are flowers in the room (a really thoughtful touch), and a judge’s hospitality bag containing snacks and something to drink (especially when our flight has been delayed and the restaurant is closed). Perhaps more than anything – and I have been fortunate to have this many times – is a warm welcome, and a show chair and committee who show judges how much they are appreciated. As  one judge said, “I really appreciate a letter waiting for me at check-in with info about transportation to/ from show, times, where to meet etc., as well as contact information. Also, I appreciate when the hotel is directly billed to the club… one less charge on my credit card and my taxes!”

Basically, almost all show chairs and committee members are exhibitors – and some are judges – so just think about how you would feel after spending a stressful day of travel to the show, and what would make you want to return. My experience has been that most clubs really try to be all things to all people, but we know that is impossible. Just work by the Golden Rule. And remember that almost all these people who are putting on this show – and working so hard – are volunteers.

© Dog News. This article may not be reposted, reprinted, rewritten, excerpted or otherwise duplicated in any medium without the express written permission of the publisher.
Fri, 08/05/2022 - 5:30pm