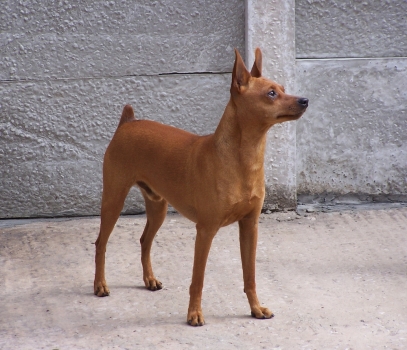 The Miniature Pinscher standard says the tail is "docked in proportion to size of dog."

In a previous article, I discussed some of the reasons judges might disagree with each other when placing dogs. One area of differing opinion that often comes up is docked versus undocked tails on various breeds. I judge many breeds that are involved in this discussion yet, strangely, I truly feel strongly both ways – depending on the breed – and I really don't understand why.

In an effort to get a wide scope of opinions, I sent a survey to many respected U.S. and foreign judges and breeders. The diversity of opinions shows why it is a good thing we have more than one show a year.

Certainly, to a significant extent, a person's feelings about docked versus undocked tails depend on whether that person's breed is involved or not. As with other differences of opinion, I believe a person's frame of reference is determined by his or her original breed or group. To be honest, I was surprised by some of the responses I received.

Some difference of opinion is determined by whether a judge believes the breed standard needs to be enforced literally to the nth degree or if the judge believes an understanding of the breed and a parent club's opinion – expressed in memos to judges – should also be considered. It reminds me of a scene in Big Bang Theory in which Leonard's mother (an agnostic scientist) says to Sheldon's mother (who believes the Bible as being literal), "Why don't you read another book?" and Sheldon's mother replies, "I will – when God writes one."

As a basis for our discussion, here is what the standards for some of the breeds say:

Cocker Spaniel: The docked tail is set on and carried on a line with the topline of the back, or slightly higher ... .

English Cocker Spaniel: Tail-Docked. Set on to conform to croup.

English Springer Spaniel: ... a medium-sized sporting dog, with a compact body and a docked tail.

Sussex Spaniel: The tail is docked from 5 to 7 inches and set low.

Welsh Springer Spaniel: The tail is generally docked and displays a lively action.

Doberman: Tail docked at approximately second joint, appears to be a continuation of the spine, and is carried only slightly above the horizontal when the dog is alert.

Rottweiler: Tail docked short, close to body, leaving one or two tail vertebrae. The set of the tail is more important than length.

Responses can be divided into three groups: (1) If the standard says docked then it must be that way, regardless of any memo from the parent club, (2) No problem with undocked tails, and (3) middle of the road.

Here is an example of those in the first group, "When it comes to Dobermans, as a breeder, a judge and part of Judges Ed for over 15 years, I absolutely would never put up a natural eared or tailed dog in the ring. If the best dog in the ring has a long tail or dropped ears, I would excuse it for not meeting the breed standard. Being cropped and docked are an undeniable part of the essence of the breed."

Another is from a breeder-handler: "I do not approve of long tails in breeds that do not address them in the standard. I personally feel it totally changes their appearance. ...  if it is not addressed in the standard they should not be rewarded. The English Springer Spaniel standard states '... a medium-sized sporting dog, with a compact body and docked tail.' If they have an undocked tail they do not conform to the standard."

And another: "I can add my comments on Dobermans and Rottweilers, as I judge them. Both standards address the tail is to be docked and to what length. The docked tail also adds to the overall appearance. ... the [undocked] dogs shown are a deviation from the standard and have to be addressed as a deviation until the parent clubs make additions to the standard. Keeping that in mind, I would judge the entire entry and if the tailed dog is the best entry, I would award that dog. The dogs I have had in my ring with tails have had many other deviations from the standard ... ."

One of my favorite people absolutely believes that we are to judge by the exact words in the standard. Period! If undocked tails are to be allowed then it should be in the standard. Clubs that want judges to allow this have to do more than send out a memo: Change the standard! When asked about dogs that are brought over here from countries that do not allow docking to add to the gene pool, he says go ahead and use them for breeding, but I don't want to see them in the show ring.

Among those who have no problem with undocked tails for their breed, two top Welsh Springer Spaniel breeders say, "Coming from a breed that was very proactive in accepting long tails I have no problem with it. ...  judges need to relearn their view of breeds that have never had a long tail to ... having tails. The outline of the dog is very different and can make some dogs look longer bodied than they are."

A multi-group judge who is a highly respected breeder of breeds who are shown both docked or undocked feels very strongly about this issue. Here are some of his comments:

• I think it is LONG PAST time that judges get over this issue. For me it shows how limiting judges can be ....  [Would] you would rather select a lesser-quality dog over one you would prefer but [for a tail]? Remember ... they all had tails.

• I think judges should know better and put up the best dog. Most judges default to the standard to justify their excusal [of dogs with tails]. To which I love to reply ... are you excusing all of the dogs without the correct layback of shoulder? What about undershot bites? The best judges will use the best dogs ... some will have full tails. GET OVER IT and move on with your day. It's a tired, boring argument ... and we should want to encourage quality over faults any way and day.

• Sometimes breeders are being held back by parent clubs’ internal debates ... and judges should be able to think for themselves to encourage a breed in a forward motion.

Another multi-group judge who is also a well-respected breeder puts it this way: "As genetics go, the quality of a dog as represented by its genes has no relationship to whether humans find it necessary to remove an appendage for their intended purpose. As a breeder I have no problem with otherwise gorgeous type being accompanied by a tail."

An internationally respected judge states: "It’s a fault. But ... come on! There are SO MANY more serious, hereditary faults (thinking of bad bites in American Cockers, or steep shoulders/short upper-arms/lack of forechest ...). Now, having said this, I feel so much more comfortable when standards are changed in order to instruct judges specifically what to do!"

An interesting point that came up during this survey revolved around Rottweilers. Many judges stated that this is a breed that absolutely requires judges to only use dogs that are docked. This does not seem to be true. As a reminder, the standard says Tail docked short, close to body, leaving one or two tail vertebrae. The set of the tail is more important than length.

Contrary to what many judges think, a former president of the American Rottweiler Club believes it is the parent club's job to interpret the standard, and he said, "In Rottweilers you should pick the best specimen ... The tail docked or present is irrelevant. There is no penalty in the standard for a natural tail and in fact parent club’s judges education confirms that the set of the tail is all that is to be judged. There are dozens of champion tailed dogs, several bred here. There is also a Group winner and multiple Group placers. At nationals, ALL under breeder-judges, there have been points awarded for winners for tailed dogs.”

The Rottweiler judge's education coordinator states, "It is a non-issue for me. It is not genetic; it is cosmetic. I don’t dock my Rottweilers. I feel as judges we need to go with the future if we want this sport to grow and keep alive. It is frustrating for me to [think that] the tail is more important than structural faults or lack of breed characteristics. The ARC is fine with tails."

A multi-Group judge is in the middle of the road when she says, "Standards exist to aid breeders and judges alike in selecting breeding stock. ... Nearly all dogs are born with tails, and so using an individual with an undocked tail is not really a genetic consideration. Tail set, croup, etc., of course are. As a judge, I have awarded exhibits with tails in traditionally docked breeds if I felt the dog to be the best and allowed by the breed standard. A judge must respect the breed standard on this subject. ... I will say that an undocked tail often reveals more about the tail set, set of croup and topline to the judge than many exhibitors realize, making it more than just a cosmetic issue. I also think it's important to remember that originally there were usually very good reasons related to function and health for docking tails – it is not just about looking 'smart.'"

Another respected multi-Group judge and breeder says, "As a breeder, I will continue to dock as it was historically and is currently necessary for function in the conditions the breed was developed to hunt. The dog’s hunting demeanor necessitates docking to prevent injury. Our standard says ‘docked.’ Nothing else.  If a judge chooses to excuse the dog for not being in compliance with the standard, that is his prerogative and he is staying true to the standard, so he should not be condemned. We have no disqualifications or listing of faults in our standard, so I consider an undocked dog to have a manmade fault, and as such, the very least important fault.

If two dogs are absolutely equal in everything else, but one is docked and one undocked, then the docked dog places over the undocked. However, when have two dogs been absolutely equal? Our parent club sent out a directive as we chose not to open up the standard. The standard is an historical document. Every time it is opened, a bit of history is erased. I hope judges keep track of the various club directives and keep them with the standards. As a judge, I would comply with a parent-club directive.”

So, where do I fall in this discussion? When I say I feel very strongly both ways I mean there are some breeds, such as Dobermans, whose outline and overall balance seems undone to me by an undocked tail. However, there are others, such as Cocker Spaniels, in which undocked tails do not bother me at all.

The bottom line for me is that although judges are to judge according to the breed standard, they are also in the middle of the ring to choose the best breed representative. I try very hard not to step over a great dog to put up a good dog, and I will continue to do that.

© Dog News. This article may not be reposted, reprinted, rewritten, excerpted or otherwise duplicated in any medium without the express written permission of the publisher.
Wed, 03/24/2021 - 10:06am