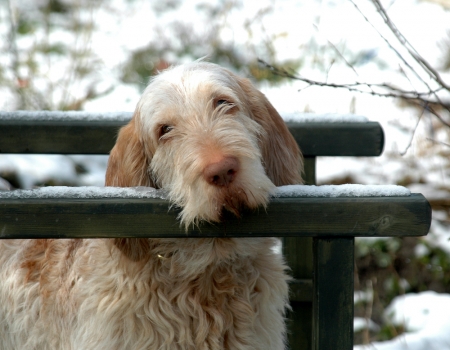 At a recent dinner with a few judges, I had a discussion with a very good "dog-person" about the apparent disparity in some breeds when it comes to performance and conformation. I wondered if the reality is the same as the perception that there is a great divide in most breeds.

A great many of us started out with the goal of producing “dual-dogs” in our respective breeds. In 1965, it was my goal to have a dual-champion Irish Setter. I was a complete flop at that goal. For this article, I contacted people who are significant in their breeds, and asked whether they felt there was a serious split in their respective breeds between “show” and “performance” dogs.

An interesting result of this very limited “survey” was the apparently significant discrepancy between conformation and performance dogs in some sporting breeds, whereas other breed groups seem to have been able to maintain more of a duality and adherence to breed function. To be honest, with exceptions, there is less of a split than I thought I would find, although I certainly did not check with every breed.

Like many breeds, English Setter conformation entries are much less than years ago, although they are still very successful in group competition. According to an English Setter representative, “Given the opportunity, most English setters love to hunt - both the "show dogs" and the field-bred dogs. However, there is a HUGE difference between show dogs and the strictly field-bred dogs, so much so that they appear to be different breeds. …  the "show" dogs tend to be heavier, carry more coat, have a head with parallel planes, and carry a level tail. The field dogs are smaller, finer boned, far less coat, and usually a 12 o'clock tail. … . ”

A competitive “field dog” is expected to “be on point” with tail held very high. Originally, before the invention of shotguns, all Setters, as their name implies, would crouch – or “set” - so that the hunter could throw a net over the dog and the birds. “Show Setters” still tend to do that whereas “Field Setters” – who hunt at a greater distance from the hunter have been bred to have a high tail carriage which can be more easily seen from a distance.

Welsh Springer Spaniels flush game by ‘springing’ into heavy cover. There is no dichotomy between a “field” or “show” Welsh. “Breeders encourage puppy buyers to engage in various activities (conformation, companion, performance, and personal hunting) with their dogs.” The Parent Club offers annual awards for dogs that excel in both conformation and performance. Welsh Springers can be successful as “gentleman hunters” with their owners.

Sussex Spaniels are very similar to the Welsh Springer Spaniel in both purpose and versatility. There is no apparent split in the breed, and most Sussex are still able to perform their function when given the chance.

Interestingly, a Spinone Italiano representative said, “Opinions in our breed are split more than the breed is, but it has always been a concern with us.”

Many Flat-Coated Retriever owners prefer spending their time and money at field or performance events, and are very serious about maintaining their breed as a versatile dog, able to compete in many venues. To qualify for FCRSA Hall of Fame a dog must have a field title. A Flat-Coat breeder whose dogs have achieved conformation championship and Master Hunter titles (and qualified for Master National) says, “The majority of dogs whose main area of endeavor is in the hunting field … also are shown in the conformation ring.  A minority of breeders and owners who are primarily interested in field competition 'don't care about conformation', which I think is a great mistake, but most do both to some extent.”

The Chesapeake Bay Retriever “… hunt(s) waterfowl under the most adverse weather and water conditions, often having to break ice during the course of many strenuous multiple retrieves.”  A breeder says, “There is no significant split within our breed. … The ACC (American Chesapeake Club) gives out “dual” awards every year to recognize dogs who achieve both Champion and Master Hunter titles. The breed's top winning conformation dog also has his AKC Master Hunter Title, has competed at the Master National and placed in field trials. There are other group-placing and supported entry-winning Chesapeakes with Hunt Test titles and/or have been successful in field trials. On Friday, a Chesapeake can run a hunt test or field trial, on Saturday the same dog can compete in the ring, then on Sunday go on a hunt with his/her owner.”

The Nova Scotia Duck Tolling Retriever “… was developed to toll or lure and retrieve waterfowl.  The tolling dog runs, jumps, and plays along the shoreline in full view of the flock of ducks, occasionally disappearing from sight and then reappearing. The dog’s playful actions arouse the curiosity of the ducks and they are lured within gunshot range.  The Toller then is sent out to retrieve the dead or wounded bird.”

“There is not a significant split between show dogs and the performance/hunting dogs in our breed. Our parent club works hard to accomplish this by offering multiple Toller hunt tests spread throughout our 7 regions. … In order for the toller to have a NSDTRC-USA Club Championship, they must have a breed hunt title (WC, WCI, WCX) and we have a Rusty Jones Award which is for dogs with a conformation championship, a club hunting title and an obedience title.”

Our Pointer breeder tells us, “Fortunately this breed has many quality conformation dogs that are very capable to perform the breed's function.  As with any competition whether field or conformation, the values of the selection process shift to the respective area of interest. High level field dog (owners) place more value on performance with less selection to the standard while show dog (owners) place the value on selection to the written standard.”

I absolutely agree that the desired function determines how a breed or specific dog is perceived. However, I also would point out (no pun intended) that a “true field-bred pointer” has little in common with a “breed dog.” The field Pointer is almost always significantly smaller in size and broader in chest. Even though he often does not represent what we would consider correct structure, these little dogs “run on heart,” and will run forever.

“A good beagle should be able to (pursue small game, namely rabbit and hare) very easily. It is very instinctive and most hounds can perform the basics of the task before a year old. However, there is absolutely a split in beagles, so much so it is almost two different breeds.”

“Whippets today still race and lure course (which is supposed to be a simulated rabbit hunt). Most of us who own them and do not live in urban areas have stories about their continuing effectiveness and interest in killing small game. The breed may not overall be as speedy but the instinct is still very much there.”

“When it comes to racing, the top racers are bred and look quite different from the top show dogs. To be honest, there is probably a percentage of non-Whippet blood behind the top racers via the introduction of small greyhounds in the pre-DNA era.  The conformation of the top racers differs markedly from what judges would reward in our breed rings, and to be honest, it differs significantly from the breed standard as currently written.” The Parent Club encourages the versatile, all-around Whippet with an award of Versatility.

Considering the Otterhound, I think the almost complete lack of availability to perform the breed function – hunt and kill river otter – is the deciding factor. There are essentially no hunting dogs left in the U.S., however a performance dog can be competitive in the conformation ring.

Harriers is a very old breed used to hunt hares and fox in a pack, followed by riders on horseback. Although the “show” Harrier is still able to hunt, one breed representative considers that the breed is “in serious trouble as the UK has banned hunting and those that kept pure Harriers are very few. Most hunts that have histories dating for over 100 years as an organized pack have been forced to disband.”

“The Black and Tan Coonhound is first and fundamentally a working dog, a trail and tree hound, capable of withstanding the rigors of winter, the heat of summer, and the difficult terrain over which he is called upon to work. There is not a significant split between "show dogs" and performance/hunting dogs in AKC registered hounds, but (in) the UKC type/breed, absolutely. For all intents & purposes they have been two separate breeds since 1945. The primary focus of the UKC is field performance and those hounds would, for the most part run circles around our AKC hounds.”

The Bouvier des Flandres was developed as a multipurpose farm dog.  They were tasked to herd cattle, pull carts, protect humans and stock, and they are still “very capable in the herding and carting arena. … As for protection work, Bouviers are primarily a personal protection dog.  A few have participated in protection ‘sport’ and done well but this is no longer a primary focus for our breed…especially with today’s world view of dogs and their role in it. However, my bet is that a Bouvier could, and would, protect his/her owner if called on to do so.  They are by nature equable and todays’ Bouviers retain that necessary quality.” There is not a split between “show” and “performance” dogs. “Most of our Herding Champions are also Dual Champions.  Likewise, there are many carting champions who are also AKC champions. This holds true for agility, nose work, obedience, rally, tracking and more.”

The Siberian Husky is bred to pull light loads long distances. According to our Siberian expert, “… there are pockets of dogs in the conformation ring which could (fulfill their function). Unfortunately, there are also too many in the conformation ring which are too short on leg, lack proper angulation and ribbing (to do the job). … the parent club encourages sled dog classes at specialties. At the National these classes are free. Nationals also frequently feature sled dog sweepstakes and fun sled events.”

The Bernese Mountain Dog is an “all-purpose farm dog that was bred to move dairy cattle from one pasture to another and take milk and cheese to the market with a cart as well as guard the farm.” There does not seem to be a real split between “performance” and “show” dogs in this breed. “We have many dogs that do drafting (cart pulling) with titles offered by the BMDCA. We have a Versatility title with an Excellent level that is very prestigious and a goal for many breeders and exhibitors.  We also have at our National and many regional specialties a Versatility competition for dogs with this title.”

I believe that most Terrier breeds can – and will – perform their natural function although those who primarily work at this may not be “groomed” as perfectly as their show cousins. The Non-Sporting Group has a very eclectic group of breeds, with some maintaining versatility and others not so much. Toy breeds – primarily bred to be companions and watchdogs – still maintain those abilities.

To some extent, the more “popular” a breed is in the conformation ring, the greater is the chance for differentiation of that breed from its field/performance counterpart. The lower entry breeds have been able to maintain more of a versatility ability. The opportunity for many of these breeds to perform its function has been limited in many ways – most notably the lack of opportunity.

To a very real extent, some dogs simply have greatness in their DNA.

© Dog News. This article may not be reposted, reprinted, rewritten, excerpted or otherwise duplicated in any medium without the express written permission of the publisher.
Mon, 09/27/2021 - 7:13pm