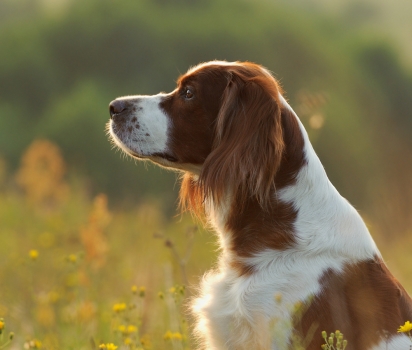 Judges may disagree over how to interpret certain terms in standards, such as the "clear islands of red color" called for in the Irish Red and White Setter.

Who is right and who is wrong?
By
Sid Marx

Leaving aside the social aspects and rankings (i.e. bragging rights) of our dog shows, it must be recognized that the primary reason for them should be to simply find and acknowledge the best of each breed's representatives. It is a way of letting breeders know how their "programs" are doing, and it shows others the way to go.

Let's also acknowledge that every AKC-approved judge completes essentially the same type of judge's education  – although not always to the same degree – for each breed. That being the case, what does it mean when judges apparently disagree in their decisions? It is important to recognize that – with a few exceptions – it is not a right or wrong situation.

Please, do not let the words "different types" sneak into your thoughts. There is only ONE type, but there may be many different STYLES, often dictated by the preferences or trends of the era.

Let's start with a relatively easy example. The Irish Red and White Setter standard says: "The base color is white with solid red patches (clear islands of red color) ...” What constitutes "clear islands"? What if I consider this a major nuance of the breed, since the colors are part of the breed's name, and I believe that "islands" means a number of islands/patches of red as opposed to a dog that has one or two large "islands" that I consider that a "continent"? Assuming everything else is equal (and it never is), I would lean toward one dog, and you might favor the dog with the bigger "island."

Who is right and who is wrong?

The American Staffordshire Terrier could be another example. Its standard says, "The American Staffordshire Terrier should give the impression of great strength for his size, a well put-together dog, muscular, but agile and graceful, keenly alive to his surroundings. He should be stocky, not long-legged or racy in outline." What if I key in on the words "great strength," “muscular" and "stocky," while you tend toward "agile" and "graceful"? My understanding of this standard might make me think of an offensive or defensive lineman in football, while yours would tend toward a linebacker or safety. Certainly a dog can’t be muscular and stocky as well as agile, so is one judge right or one wrong? Again: Muscular, stocky AND agile? Well, consider Friesian or Clydesdale horses. Don't they combine both attributes?

Okay, those two examples are pretty simple. Let's look at other areas that are more in the shadows rather than black and white. We seem to like to put labels on people, so there are some judges who are considered "movement judges” and others who "like type," and some who just "like a pretty dog." To me, these labels are somewhat insulting and often very wrong. Isn't movement part of type? We all "like a pretty dog," if that "pretty" fits the standard.

So, if both "type" and "movement" judges look at a breed whose standard says, "At the trot the gait is big, very lively, graceful and efficient. ... The forelegs reach well ahead as if to pull in the ground without giving the appearance of a hackney gait. The hindquarters drive smoothly and with great power. Seen from front or rear, the forelegs, as well as the hind legs below the hock joint, move perpendicularly to the ground, with some tendency towards a single track as speed increases ..."  how can there be such wide disparities in placements?

I think some have gotten the "big, very lively" down, but may have missed the words "efficient" and "reach well ahead as if to pull in the ground without giving the appearance of a hackney gait." This is an area in which I see a lot less room for understanding the disagreement other than to say there must be some who truly are "pretty dog" judges.

Maybe I am just too close to that breed to be objective, so let's look at another. I have often spoken about handlers who groom and show every breed the same way. Can it be that some judges do the same thing? I think one of the most harmful expressions ever used in describing a dog's movement is TRAD – Tremendous Reach and Drive. And because of those words, we have judges who look to have almost every breed move that way – even if it is wrong.

Overreaching is incorrect. Rear drive that has a dog pushing so hard he kicks his rear pads up high is incorrect. Period. Consider the breed whose standard says, "an impression of power with a springy gait, showing good reach in front and a strong driving rear." What if this breed is judged by a judge who rewards Tremendous Reach and Drive? When a judge understands the function of the breed, it is easy to understand that TRAD for this breed would be incorrect.

What is a judge to do about a breed that absolutely has one or more weaknesses that seems to be prevalent throughout it? For example, what if a breed is known to consistently have poor rears? Should a judge just expect that weakness and accept it? Or should that breed just constantly be left out of the ribbons? And if this weakness is accepted as a reality throughout the judging community, does it then become a self-fulfilling prophecy? How does that factor into judging the whole dog?

I believe one of the reasons that judges look at the same dogs in a different way is their frame of reference. What was their initial breed? What group are they most familiar with? If, for example, a judge's background is in Sporting breeds, the term "moderate angulation" is different for him than it might be for a judge whose background is entrenched in other groups. Too many standards use terms like "moderate," and so the term has almost become meaningless. What is considered moderate angulation for a Chinese Shar-Pei is certainly different than it is for an Irish Setter.

Akin to a judge's background is whether she is a multi-group judge versus a "breeder-judge." While some people may think the multi-group judge will be more of a "generalist" or look for a more generic dog, the breed specialist also comes to the ring with some baggage. The specialist may have had a problem in her breeding program that did not allow her dogs to have lovely heads, long rib cages or strong movement (pick any one or two of a multitude of breed nuances), and so she may lean toward this in a particular dog. Or, if the specialist knows one of the nuances of the breed is a weakness, she may seek to reward a dog that is strong in that area. A "generalist" would not have this issue. Both judges can do a great job if they just judge the whole dog without any preconceptions.

I think the biggest reason that judges look at the same dogs differently is a matter of priorities. When trying to decide between two dogs we often say, "assuming everything about the dogs is equal," but we all know that is hardly ever the case. Almost every breed standard is presented in a format that separates general appearance, size and proportions, head, body, fore and rear quarters, movement, etc. Well, what if one judge thinks the most important defining characteristic of a specific breed is size and proportions and another thinks it is head and movement? Could they not look at the same class of dogs and choose differently?

Speaking again of a judge's background as providing the frame of reference for judging a breed, a judge who has some experience working with a breed in the field or another task that is important for that breed may put different priorities on a breed than one who has no connection to it. For example, a judge who has hunted over a Sporting breed that works all day may think that length of rib cage and soundness are much more important factors than a judge who has never experienced what it takes for a dog to work all day.

A judge who has experienced the weight of a large duck, pheasant or hare would realize the importance of a strong muzzle on a retriever. Watching a Golden or Chesapeake retriever climb up a hilly shore out of the water would help a judge understand the importance of proportions and proper amount of leg. And a dog who climbs out of cold water, shakes, and then dries off quickly reinforces the importance of a proper coat without additives, foreign substances or a blown-out fluffy coat.

So, there are many reasons judges may disagree about a specific dog, and as long as decisions are made consistently, based on their understanding and interpretation of the standard, that is as it should be. The same dog should not win all the time – they are not machines.

© Dog News. This article may not be reposted, reprinted, rewritten, excerpted or otherwise duplicated in any medium without the express written permission of the publisher.
Fri, 03/19/2021 - 7:13pm