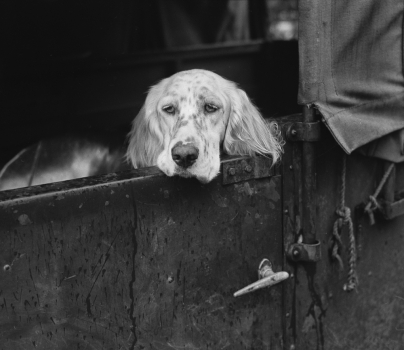 English Setter at a 1950s dog show. The sport has grayed substantially since then.

There is no question that our sport is “graying,” and has been for a long time. The loss of new (sometimes read as “younger”) members really shows when trying to set up and run a dog show.

Another area where this shows up is at kennel-club meetings. Certainly, Covid has affected attendance at in-person meetings over the past year to two, but now that things are slowly returning to normal, how do clubs attract members back to meetings? Although the “business” of the club is important, most members are not interested enough in this to make an effort to attend a meeting. Something more is needed.

Recently, the Sporting Dog Association of Arizona held what I think was an interesting meeting. As with many clubs, our membership is comprised of a few AKC-approved judges, experienced breeders and exhibitors, and some relative newcomers to our dog community. This meeting was designed to have a couple of judges – Bob Robinson and I (with assistance from Pat Robinson and Shelly Marx) – answer questions from the membership, as well as do a hands-on demonstration of how a judge examines a dog. We held a meeting similar to this at the Colorado Springs Kennel Club when we lived there a few years ago.

I think the members who were present enjoyed this meeting, and perhaps even learned something. For me, the greatest thing about this meeting is that we just got to “talk dogs” like we used to before everyone was in such a hurry to run home after their breed was shown. The fact that a significant part of the discussion gave exhibitors the opportunity to “peek behind the curtain,” and get a sense of what judges are thinking as they go through their procedure in the ring, was icing on the cake. After hearing about so many websites where many judges are lambasted, I think it is important for newer exhibitors – and even the more experienced – to know what judges are thinking and what leads to their final decisions.

Bob Robinson and I described our procedure – basically what we did and why. We talked about what we look for as the dogs enter the ring and do their first go-around. We then did a hand-on examination of two different breeds (English Cocker Spaniel and a Golden Retriever), describing what we were looking for in each dog. Each of these breeds – like every other breed – has significant key breed “must-haves” (such as the proper breed silhouette) and the “nice-to-haves” or nuances, such as the beautiful chiseling on an Irish Setter head. There are hallmarks of the breed that simply must be there for a dog to win, and there are nuances that add to quality and make a dog special. We discussed the proper proportions we looked for in the Golden Retriever, and the “cobbiness” and strong rear muscling on the English Cocker.

Some of the attendees had handed in previously written questions, and others were asked as the meeting went on. I am sure some of the questions asked are the same ones many exhibitors would ask if given the opportunity.

What made you become a judge?

Bob and I had very similar responses to this question – and I think most judges would reply comparably. All judges started out just as everyone does. We all were breeders, exhibitors or owners. I was also a professional handler. At some point the time comes that we decide we can no longer continue to make left turns at every show, or we simply have nothing more to show. I know it sounds corny, but almost all of us want “to give back to the sport/community we love.” While I was a handler, I was asked by an AKC officer to become a judge. I had seen so much (in my opinion) poor judging, that I decided I wanted to try to become a better judge to give everyone a chance.

By the way, the question often comes up as to whether a judge should also show a dog. Of course they should. Some judges continue to follow their true love, which is breeding good dogs. Why shouldn’t they show them? As a matter of fact, when my wife and I showed our own dogs, we made very sure that we only showed real quality – as you would expect from a knowledgeable judge.

How important are first impressions when the dogs first enter the ring?

My procedure is a little different from some. I ask the exhibitors to just let the dogs stand and relax as I walk down the line. I am looking for expression (and do any of the dogs look like there may be a problem), and want to give each dog the opportunity to see and smell me as I greet them. I get an initial impression – maybe even a feeling – as I first glance at them, but then the hands-on examination and watching movement either confirms or changes that opinion. By the way, I believe in allowing dogs to stand on their own often without the handlers maneuvering and stacking them.

Why does a judge pick up the dog’s feet?

If we are talking about every breed, I cannot answer that question. Obviously healthy feet with strong pads are important for every breed, but I don’t believe it is necessary to pick up feet to check this on every breed. Some breeds are very specific about feet. The Irish Terrier breed standard says, “The pads should be deep, and must be perfectly sound and free from corns,” so to check this properly, some judges will lift a foot. It is not difficult to do this as this breed is usually on a ramp. The Afghan Hound standard says, “forefeet large in both length and width” and “pads of feet unusually large and well down on the ground.” Some judges might lift a front foot to check this, and others probably believe it is pretty easy to see a large, well-padded foot without lifting it. For most breeds, I don’t consider lifting a foot, but that would be a judge’s prerogative.

And, of course, THE key question was: Do professional handlers have an advantage?

I believe the correct answer is yes and no. The real professional has the advantage of often being able to pick and choose which dogs to show to which judges. Most of them study judges and know what style a judge likes and what the judge looks for. Most – but not all – professionals excel at presenting their dogs. And, of course, professionals go to more shows, so statistically that is in their favor. Really top professionals study and learn what different judges like. For example, one said that certain judges prefer a dog to be shown a specific way (free stack or “head and tail”). So, this professional changes her handling style to fit the judge.

On the other hand, too many professionals show (and often groom) every breed the same way, and this is obviously wrong. An owner-handler should know better, and hopefully won’t fall into the trap of trying to emulate what the professional is doing. An owner should know his own dog better – know the dog’s quirks, strengths and weaknesses. Perhaps for many judges, an owner-handler has to have a distinctly superior dog to win – or maybe the owner just has to show to judges who judge dogs. (The same also holds true for those who show lower-entry breeds.) There are many owner-handlers who groom and show their dogs beautifully and are very successful. The top owner-handlers also alter their show style to match the judge’s preference. In addition to showing their own dogs, these owners should also be applauded for breeding quality dogs.

I was very fortunate to receive great feedback from friends who are excellent “dog-people,” and agreed to let me share some ideas with you. One breeder-judge thinks we should essentially let exhibitors know what we are thinking at every show. He correctly pointed out that oral critiques are given at livestock judging. This was also taught to me by one of my early mentors – George Brodie, who was also a livestock judge. I have judged in Sweden and the process there is to dictate a critique on every dog judged, and these critiques are then shared with everyone. I know some judges would find it difficult to give a verbal critique and often the comments are repetitive, but some simple comments on what the judge is seeing could be a learned talent.

Another breeder-judge talked about an extremely interesting program she implemented in her club:

“Many years ago, I coordinated a three-part-program called ‘Who’s in the ring.’ One month a multiple-group judge talked about what she wanted/expected from the exhibitor. The next month a professional handler talked about what he wanted in a dog and planning a show schedule. Finally, a very successful owner-handler spoke about advertising and the importance of attending your national in order to learn and be taken seriously. A very interesting three months.”

She added, “The professional handler talked about attitude and how to develop a dog that wants to show. PHA handlers have great insights. If there is one in the area, invite him/her to speak, as there are a multitude of topics: contracts, fees, ‘first call’ clients, the economics of using a handler vs. doing it yourself, setting goals, choosing the right handler for your breed and your dog.” All great ideas.

Meetings like these could help keep a membership interested and active. Certainly, these types of meeting can be difficult (finding the right location being one problem) and not every meeting can have a strong, interesting program, but if an effort is made to have an interesting program at least on a quarterly basis, maybe this will keep members engaged.

Many people just want to be a member and show their dog. I understand that as I feel that I have “paid my dues” and can now hang back a bit and let others take over, but that really doesn’t help a club put on a show.

© Dog News. This article may not be reposted, reprinted, rewritten, excerpted or otherwise duplicated in any medium without the express written permission of the publisher.
Sun, 10/31/2021 - 6:07pm