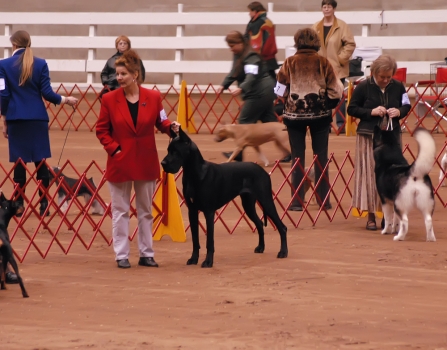 Those were the days, my friends: a dog show, pre-COVID.

Judging During the Pandemic

Mixed emotions on a return to the ring
By
Sid Marx

As the rest of the country – actually, the world – struggles to maintain some sense of sanity, our dog community is moving forward in a steady, sensible manner.

Although I believe it is still extremely necessary to be as alert and cautious as possible, I am proud of how well our dog family has adhered to the safety measures laid out by AKC and the CDC. Even so, we must accept the fact that there is some danger involved when our judges – many of whom are in one of the most endangered groups – accept an assignment to judge during this period.

It should be readily recognized that no matter the reason that one decides to become a judge, every good judge has a passion for what we do. Many of us have truly gone through very real withdrawals without shows to judge. Just as exhibitors had to make decisions when clubs began holding shows again, so did our judging community. Like many others, I had many of my assignments cancelled as show after show fell by the wayside. There were also some that I cancelled because I was not prepared to get on a plane at that time.

When I finally made the decision to again accept judging assignments, it was with mixed emotions. I was excited to get back to doing what I love. I was a little nervous because it had been a long time since I had been away from a ring for this long a period of time, and I know that the more often I judge the quicker I get into a rhythm, and my “eye for a dog” is at its full strength. And, to be honest, I was still quite concerned about getting on a plane and staying in a hotel. But I felt it was time.

So as the time got close for me to fly to my assignment, I felt a combination of excitement and nerves. My flight reservations were made. I had to try on some clothes to see how many have survived my personal COVID “19.” I have re-read the breed standards for all the breeds I am to judge. I have spoken with judges who have already gone through the new process, and I find myself taking a lot of deep breaths. I hoped I was ready.

After speaking with some friends who have already judged during this time, I decided I would rent a car so that I didn't have to take a shuttle van, and it also gave me the flexibility to get dinner to take back to my room. I am not a big fan of large judges’ dinners that take a long time, and get judges back to the hotel too late at night. But I do enjoy sitting with a few friends for dinner.

I was advised to buy an ultraviolet light sanitizer. I always choose an aisle seat on the plane, but now changed to a window seat so that few people would rub up against me as they went down the aisle. I might even need to get a couple of pairs of pants thanks to MY COVID 20!

Leaving for the show, I was glad to see that the Phoenix airport was at about 50 percent full. I had used miles to upgrade to first class so there were less people around me. The Chicago airport was still pretty busy, and it was a very long walk to get to me to the next gate, which further served to remind me how out of shape I had gotten.

At the hotel I was delighted to see familiar faces I had missed: Barbara Alderman, Bill Shelton, Peggy Beisel-McIlwaine, John Wade, Desi Murphy and others. Except for the masks, it was as if we had never been away, and quickly fell back into a discussion of our passion for breeding and judging dogs. The next day dear friends – Robin Hug and Jean Pero – arrived and added even more to the feeling of being with people I care about again.

At the show site, it was good to see the Onofrio crew hard at work. By the way, we all should be very grateful and thankful to the Onofrio organization for going the extra twenty miles to help get our shows back. The efforts of this superintendent enabled clubs to sponsor shows, enabled exhibitors to get their dogs back in the ring, provided a format for professional handlers to again earn their living, allowed judges to get back to doing what we love and to pass on our opinions and knowledge – as well as thinking creatively to keep their business afloat. The “Onofrio Crew” could be see all over the show: laying out armbands, setting up rings, parking motor homes, and in general making sure everyone was following the safety rules. Well done, Onofrio – thank you for helping to save our sport!

You could almost FEEL the smiles under the masks because people were so happy to be back in the ring, doing what they love. If there is any positive to come from 2020, maybe this will drive out the Hit and Run people (show for three months and leave because they have not won) and the Fake News people (everyone is a crook, it is fixed, did you see that dog's rear kick out?).

For the most part, I was pleased with how well everyone complied with the rules. At one point, Steve Keating spoke to those assembled to again remind all of us of the importance of social distancing.  I was not going to have dinner with anyone else, because I did not want to sit inside a restaurant, but we found an absolutely beautiful place where we could eat outside at tables of four and it was wonderful. Great food and great company.

The entry was smaller than we had hoped, primarily because it was a new "cluster," and not everyone knew about it. This was a slate of experienced judges and the very limited number of stewards was not a problem at all. The entry might have lacked in quantity, but it definitely did not lack for quality. Some of the top dogs in the country were entered and made for very strong breed and group competition. In the three groups I judged, I could easily have used another three or four rosettes. Truly excellent depth of quality.

Because of health requirements we have implemented changes at our shows – some of which I hope will remain when we return to some degree of normalcy. Keeping ring entrances and exits apart is a good thing. (I was always concerned about the congestion outside the ring of some breeds.) Taking pictures of judges before the show saved time – and steps – for judges, and I am sure the quality of pictures will be just as good. It was like in Australia where judges signed all the championship certificates before the show. The only pictures taken with dog and handler present were for Group and Best in Show.

Because of the rules against the use of blow-dryers, many breeds – such as Golden Retrievers – were shown more naturally and with less "stuff" in the coat. To tell the truth, they were much better for it!

The only problem I had was adjusting my mask to keep my glasses from fogging up, and the elastic from cutting into my ears, but I eventually worked it out. I was extremely pleased to see how kind and courteous "my family" was to each other. Wouldn't it be nice if we could teach the rest of the country how to do this?

So now I get ready for my next assignment with a little more confidence.

© Dog News. This article may not be reposted, reprinted, rewritten, excerpted or otherwise duplicated in any medium without the express written permission of the publisher.
Fri, 10/09/2020 - 5:01am