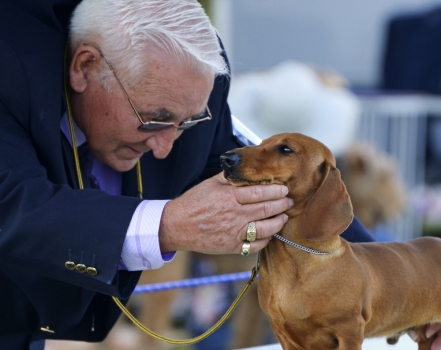 Putting Together a Judging Panel

Every show is comprised of many different elements: exhibitors, owners, stewards, superintendents, show committee, club officials and members, vendors, professional handlers, spectators and, of course, judges. In order for a show to be successful and enjoyable, all these disparate people need to work amenably and cohesively.

Much of this is somewhat serendipitous, and depends on the individual personalities and character of those involved. The show committee can do very little to affect it other than to have each club member treat others with respect and good humor – and hope they are treated likewise in turn.

And, believe it or not, putting together a cohesive judging panel can be a major factor in the success of a show.

The American Kennel Club offers Show and Trial Chairperson Tools to help file a judging panel, and to ensure that the panel meets the AKC requirements so that there are no judging conflicts based on time and distance between shows. But it takes a lot more than that to implement a cohesive judging panel that will make exhibitors and others want to return to your show.

So, what do I mean by a cohesive judging panel? I absolutely do NOT mean a panel that will consistently – and sometimes blindly – put up the same dogs all weekend or for the cluster. As a matter of fact, this can often be harmful to the club’s reputation and future entries. For me, a cohesive panel can be a mixture of experience levels and multi-group and breed specialists, but there are certain characteristics that lead to a “good” panel.

Knowledge level: Obviously this is important. Knowledge of the breeds/groups to be judged may be the second most important characteristic. Sometimes this can be ascertained by considering how long the judge has been involved in the breed/groups to be judged. I do not – by any means – suggest that how long someone has been a judge is THE measure of the judge’s knowledge. Time alone is not the key. A judge might have judged a breed for many years – and judged it poorly for all those years. On the flip side, a judge new to a breed or group might understand the breeds better because of study or just have a “better eye.”

If breed knowledge is the second most important characteristic, what is THE most important? Integrity! Judges who point at the DOGS – as they are on that day, and not people – with the only intent being to choose the best breed representative will keep exhibitors returning to show to them – and be a true benefit to our community.

Where is the emphasis put? Correctly or not, some judges are labeled as “movement judges” or “head judges” or … whatever. A judging panel that – across the board – puts emphasis on finding good breed type, and looks for strengths rather than finding faults, is a good panel.

Certainly, a judging panel should be comprised of judges who are considerate of the dogs and exhibitors. There is absolutely no place on “my” panel for a judge who is rude or demeaning to exhibitors, or is hard on the dogs.

Along the same lines, a judge should be considerate and appreciative of the show committee and their hard work.

In most cases, I believe that a judge who judges a group would prefer to have judged the breeds within that group on the day. A group judge should not have to place dogs in a group where another judge may have sent the “wrong” dog (in the group judge’s opinion) to the group. This is not always possible, but should be considered wherever possible.

Finally, a cohesive panel will not always have the same dogs winning breeds, groups or Best in Show. It is highly unlikely that ONE dog is so far superior to every other dog at the show that it MUST win every day, but there are probably five to 10 dogs that should be extremely competitive at the cluster. A good panel will not always place these dogs in the same order, but the most quality dogs should always be under consideration by a good, cohesive panel.

So how is this done? How can a show chairperson possibly know which judges fit the above criteria? A show chair may know about a judge in his or her breed/group, but what of the other six groups? For example, in a three-show cluster how would the owner/exhibitor of a Herding breed feel if none of the judges for her breed or group have a Herding Group background? At least one judge during the cluster should have familiarity with each group to be judged.

Who is setting up the panel and how is it done? In most clubs, members submit judges’ names for their show. Unquestionably, these names are usually of judges who have put the member’s dog up before. This may be good for that individual member, but not necessarily for the club/show. In clubs where one person – or a small committee – does the choosing of judges, the same type of situation might exist.

A better way to form a cohesive panel that will work well together and attract a good entry – and make exhibitors happy so that they want to return to this show – requires some research. A good show chair – or committee – should get input from those who will be paying for the show: namely, breeders, exhibitors and, yes, professional handlers. Certainly, there will be some personal agendas expressed, but maybe honest feedback could also be attained.

How about running your show as the business it is? Businesses do research so that they can better market their products. You can do the same thing. Reach out to other show chairs across the country. Do not limit yourself to judges confined in your area. Make a phone call – not an email, because some may not want to put an opinion in writing. Ask the show chair how XYZ judge interacted with the exhibitors. How were the judge’s choices accepted by “those in the know”? How did the judge work with the show committee and other judges? Ask, “If you could hire any judge for (a specific group), who would it be?” My caveat would be not to take the opinion of a show chair who has shown her breed to a specific judge and lost as gospel.

It is easy to use the AKC website to see what kind of an entry a judge pulled in any specific breed. How did this compare with other judges of that same breed in that area? You may still want to use this judge, but maybe not for that particular breed.

AKC will determine if a judge fits into its time and distance qualifications, but a club can also put restrictions on a judge, requesting that she not judge in that area for a longer period of time than 30 days. Some clubs would also be wise to restrict a judge from judging at particular shows in the same general region. The reason for this is those exhibitors who showed at those shows – and did not win – probably won’t come to your show for that judge. It may have nothing to do with the judge’s ability: His decisions may have been correct, but wouldn’t an exhibitor think that those same dogs who defeated hers will also be at your show for that judge?

Some common sense also needs to be used to make the proper use of the combined talents of the judging slate. Why have a judge scheduled for 45 dogs on one day and 170 dogs and three groups the second day, and 125 dogs, one regular group and three NOHS groups the third day? The judge is being wasted on the first day and absolutely overworked the next two days. Yes, this takes some planning, but it is important for a happy, cohesive panel. An overworked, tired judge may not be as pleasant as he might normally be.

Especially now, after all the cancellations due to Covid, make sure that your date is not now competing with a large cluster that normally would not affect your show. During the height of the pandemic, there were very few shows and areas that continued to operate. There were also a limited number of judges who were willing to travel and judge, so we wound up with the same dogs being judged by the same judges over and over. Would you expect very different results? But things have loosened up now so that you can widen your net to reach for judges.

A good judging panel can make or break a show. Proper consideration to put together a cohesive panel is worth the effort. And whatever you do, don’t play the “you scratch my back and I’ll scratch yours” by exchanging assignments!

© Dog News. This article may not be reposted, reprinted, rewritten, excerpted or otherwise duplicated in any medium without the express written permission of the publisher.
Fri, 11/12/2021 - 5:25pm