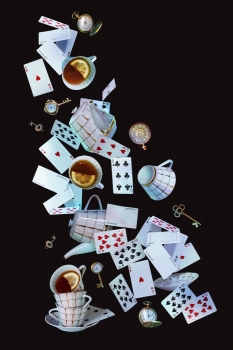 The Time Has Come to Talk of Many Things

With a nod to Alice in Wonderland, time for the fancy to reassess
By
Sid Marx

In Lewis Carroll’s Alice in Wonderland, the Walrus says, “The time has come to talk of many things; Of shoes and ships – and sealing wax – of cabbages and kings.”

Maybe such a time has come for us. Although the meaning of that poem is thought to be the themes of death and betrayal, what we will talk about is not a matter of life or death – except that it is a time for us to consider many things about what is happening in our dog-show family.

In a previous article, I discussed the difference between what a judge is seeing – and basing decisions on – and what a casual observer might see. It is my opinion that beauty is in the eye of a knowledgeable beholder (and maybe truly in the heart). However, there might be a difference between what a judge looks for and what a breeder wants – and for different reasons.

There have always been competitive people, and so it is not surprising that it is thought the first very informal “dog show” might have been held when hunters got together to compare their dogs, and this was probably in the early 19th Century. The first formal dog show in the United States was held in 1877, sponsored by the Westminster Kennel Club, making it the second oldest continuous sporting event in the United States after the Kentucky Derby. When dog shows started, they were basically backed by – and for – large kennels that competed to see which breeding program was best.

Theoretically, judges and breeders should be looking for the same qualities in a dog, but I don’t believe that is always necessarily correct. For example, a bad bite might be enough for a judge to mentally reject – and not place – a dog. However, might there not be times that – from a breeder’s perspective – a dog with a fault – such as an undershot bite – be kept and used in a breeding program because of his superior overall qualities? Might this dog have other qualities – such as a great front with excellent shoulder layback - that are difficult to reproduce? Would a breeder take a chance to see if the bad bite is reproduced, while trying to perpetuate that great front?

This was unquestionably done in the late 1800s and early 1900s, when large breeding kennels existed, and the owner/breeder could afford to “make a mistake,” and then just place that dog as a pet or a hunting dog. But in today’s world, very few kennels as large as that still exist, so the breeder must make difficult decisions. Do you take chance on perpetuating this fault to see if the very desirable front – which has proven to be exceedingly difficult to reproduce – can be attained?

I have spoken with a few of our very consistent, high-quality breeders, and almost unanimously they do take some chances to try to produce that “great” dog. Many of us know of dogs that have not been shown – for many reasons – that were excellent at stud or in the whelping pen. The qualities needed to be a breeder are not those of a judge, and many successful breeders simply do not have the desire to judge, but they are the true backbone of our family. Ribbons do not make a great breeding program!

It is obvious that all of today’s professional handlers – and most amateurs –are considerably younger than I am. I got winded a few weeks ago just showing one dog, and I am in awe of those who go from ring to ring or have multiple entries in a breed to show. I realize that I did exactly that as a young handler, but time marches on.

I am sure – at least I hope – that those who have chosen to care for, train, condition and show dogs full time make a good living for themselves and their families. I don’t think many new owners or owner-handlers realize what a difficult job this is, both mentally and physically. And, from my experience, the true professionals are always willing to help those who sincerely want to learn.

I am concerned that too many “professionals” have not taken the time to learn the nuances of running a business, and ensure that they are properly insured and have set up a retirement plan. When Covid first stopped dog shows, there were professional handlers who were not financially ready for such a hit to their income. For the sake of your families, please plan ahead. Unfortunately, like everything else, your ability to continue to show numerous dogs will not last forever.

At a recent show, a dog was left in a crate not far from the ring in which I was judging. This poor dog was there for hours, barking incessantly. Finally, a young woman showed up at the crate, and I excused myself from my judging to approach her. The conversation went something like this:

“Are you telling me you are a professional handler? That is even worse. That dog is your responsibility! Her incessant barking has made some dogs in my ring nervous, and has been annoying to spectators, exhibitors and me. What’s worse is that this poor dog has been alone and frightened this whole time. If I had the time, I would get the dog’s information so I could tell the owner how she is being cared for. Now do yourself a favor – don’t say a word, but take care of that dog properly!”

That person is NOT a professional! If she truly wants to do this as a profession, then she needs to take this experience and learn from it. This was her “pebble,” and when you drop a pebble in the water there are ripples. There are always consequences to our actions.

I recently corresponded with a young professional who was concerned about the status of today’s Junior Showmanship competition. She said, “Junior Showmanship has changed a lot since I participated. I see so many young kids taking off weeks of school to participate in dog shows, and letting their education take a back seat. Covid? Sure, that changed things a bit with virtual learning and parents being able to multi-task. There are often times I wish the all-breed clubs who host shows during the school year would NOT offer Juniors on a weekday show so that juniors were not so tempted to ditch class, go to the dog show, and work for the big handler. I’m likely the only one who feels this way, or in a very small class of people.”

Maybe you’re not. Thanks for caring. I’d like to add my two cents and ask clubs to schedule Juniors so that the more advanced, more experienced classes go first and the younger ones go last. This gives the young ones the opportunity to watch the more experienced handlers.

Those who have been show chairs or on a show committee know that there is a lot more to putting on a show than is obvious. It is a lot of work. So, I would like to commend Karen Burgess as representative of all show chairs. Karen – and her committee – put on wonderful shows for the Greater Clark County Kennel Club. Under the very trying circumstances that many show chairs have faced – such as state-mandated masking – she chaired three all-breed shows after breed specialties and group shows. Many exhibitors, professional handlers, stewards and judges alike got into the spirit of things, wearing Christmas outfits and competing in the “ugliest sweater” contest. (By the way, I won this contest a few years ago.)

And a week before these shows, Karen chaired performance events – AKC Temperament Test, Obedience, Rally, Farm Dog Certification – with record-breaking entries. This is truly providing a service to the dog community, the local economy and the AKC. And how’s this for going over the top? John Schoeneman came from more than 2,500 miles away to help with the performance events, and then stayed and acted as judges’ chauffeur and all-around help to Karen.

Well done, Karen and John. You have demonstrated the commitment shown by show chairs and those who care about our community that is shown by others throughout the year.

© Dog News. This article may not be reposted, reprinted, rewritten, excerpted or otherwise duplicated in any medium without the express written permission of the publisher.
Sun, 12/26/2021 - 5:13pm