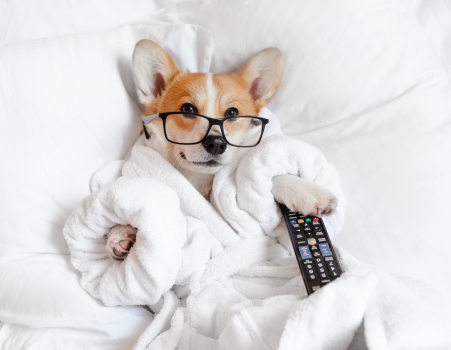 Like many who decided not to attend the AKC show in Orlando this year, I was thankful for the broadcasts on AKC.TV, and have watched with even more interest than I might have if I were actually there. It is somewhat of a conundrum, because on the one hand these are just dog shows like a great many (in normal years) others held all year – although with much larger entries. On the other hand, the hype and publicity connected with these shows raise its (apparent) importance and visibility. I am certain that the group judges for these shows feel the same honor that I do every time I judge groups or Best in Show. But maybe the real difference is in the breed judging – or at least it should be.

Since I am watching the groups at home rather than ringside, I am acutely aware of the TV announcer’s words. For the most part, I believe the announcers on AKC.TV did a very commendable job. However – and I realize this is a very naive point of view – I cringed at how many times there was a discussion of rankings and how many dogs have been defeated. To be fair, I know that this is reality in today's dog-show world, but it just feeds into the minimizing of breed competition. I also understand that much of the broadcast is aimed at the "average viewer," and not necessarily the dog community. This may be a "difference without a distinction," because I thoroughly enjoy and appreciate judging groups and Best in Show. In my mind, I am rewarding the best breed representative, although I realize for many of the winners what their rosettes really mean is determined by the number of dogs defeated to be added to the dog's ranking.

Let me be clear on one significant point (he says, holding his fingers in a victory sign): I believe many of the top-ranked dogs are very fine breed representatives – BUT NOT ALL! Casting naiveté aside, we must acknowledge that the number of shows attended, money spent on advertising and handlers, as well as travel all over the country, can significantly contribute to a dog's ranking. I have had the privilege of judging many of these top-ranked dogs. I know this is just one man's opinion, but, there have been times that I have been happily pleased about the "top dog" I am judging. But there have also been occasions when I was shocked at how a specific dog has done the winning that it has. I guess that is why there is chocolate and vanilla, and why we have more than one dog show a year.

For those who talk about the fact that the group placements and winners seem to be – for the most part – the same dogs who win during the year, why would you expect anything drastically different? Except for the few times that foreign judges are used, the group judges are the same ones who have judged all year – and these are the same dogs they have been judging all year. Especially this year, where a limited number of multi-group judges have officiated at a large percentage of the shows – and more handlers are travelling out of the area in which they usually compete – these judges have seen the same dogs many times all year. For some, they have judged the same dog at least five or six times within the past couple of months.

So what is it like to judge the same dogs at the group and Best in Show level? Many people will tell you that the most difficult class to judge is one in which there is very little quality – and these are indeed difficult (and depressing) classes to judge. However, consider this: There are six or seven dogs that I have judged over the past two years – in different groups – that I consider to be extremely excellent representatives of their respective breeds. I have awarded these dogs Group wins and Bests in Show. So what happens when two or three of these dogs are at the same show and I get to judge them in a group? Some have said this is ideal because there are opportunities to make choices among high-quality dogs. For me, it is very difficult. I do not fault-judge, so when I have two or three dogs that I consider to be excellent, where I make the distinctions to make decisions becomes very important. Yes, it is great to have a class – or group – with high quality, but that does not automatically make it easier to choose. And to some extent, I am sure these situations faced the judges in Orlando (and at other large/prestigious shows).

When I am faced with a group that includes two or three dogs that I believe are truly excellent, I need to find a way to make decisions on my placements. There are three things that I look at to help me make my choices. Let me repeat that for me these dogs incorporate the traits that I believe make them a personification of breed type – and for me, type incorporates soundness for that breed. In competitions that involve many dogs that I have previously rewarded, I specifically look for footfall and cadence. Often, in these close competitions, a handler might try to do something extra, and so he tries to extend his dog's reach and drive. All this does is throw off the dog's normal stride, and it throws his stride and timing off. Some dogs are so "ring-wise" that they start to make the turn before they are near the end of the ring, or they are so "up" that they seem to "scramble" a bit. Often these things are enough to help me make my decisions. And, to be honest, sometimes my heart just tells me what to do.

For me, the real competition at shows like Orlando is at the breed level. Except for national specialties, this show has much larger breed entries than are seen all year. This is the largest dog show in North America, and winning a large class or Winners at a show like this can be the launching pad that really starts a young dog on his show career. Conversely, many a great dog is retired after her final competition at the AKC show or Westminster. Some really good dogs do not "win" here because of the depth of competition. For some handlers and owners, this can be a humbling situation, but it should just remind you of how special your dog's great wins over the years have been.

Unfortunately, for many of us there is only winning or losing. More of us should enjoy and appreciate a good performance by our dogs. Consider that AKC agility competitions took place at this same venue. The attitude of agility competitors is much different from those in conformation. A dog can have one error that knocks him out of the ribbons – such as knocking down a bar in jumper's competition – but if the rest of the "run" was good, the handler/owner will be very happy. Consider that these competitors have worked very hard and in close relationship with their dogs all year, and (literally) a toenail on a hind foot can just touch a bar enough to knock it off to take their dog out of competition. And yet, if the dog works well with its handler, the owner/handler is happy. We in the conformation venue can take a lesson from our agility cousins.

Getting back to the Orlando shows, it is great publicity and marketing to show the group competition where the general public can see some of our best and, hopefully, enjoy the process of our dog shows. The AKC National Championship presented by Royal Canin – as well as the Westminster Kennel Club competition – has become a national "must see" for many people, whether they are in our dog community or not, and this is a plus for our purebred dog breeders. Maybe watching one of these shows will be the impetus for someone to look for a purpose-bred dog, and maybe even start them on the road to joining our show family.

And so our show year ends. Let's hope that everyone returns home safely and that we all stay healthy. I give my thanks and appreciation to those who have worked so hard to hold our dog shows safely and under some very trying conditions this year. Here's hoping that 2021 is much better and we return to a more "normal" world.

© Dog News. This article may not be reposted, reprinted, rewritten, excerpted or otherwise duplicated in any medium without the express written permission of the publisher.
Wed, 01/06/2021 - 6:12pm