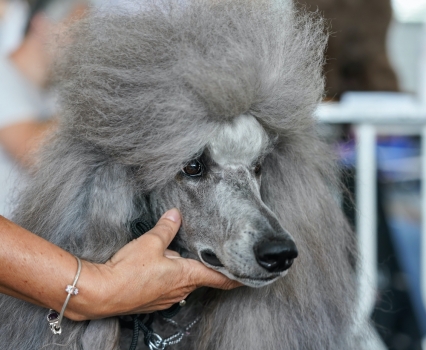 Are We All Equal?

Should popular or showy breeds have a monopoly on winning?
By
Sid Marx

Unlike most activities, one of the very unique aspects of our dog-show world is that professionals and amateurs compete at the same venue on equal footing.

Yes, regardless of what some may think, as far as I am concerned, professionals and owner-handlers are equal in my ring because I am judging the dogs and not the people. I believe the same can be said for most judges. Of course, there will always be the Negative Nellies who believe the only reason they don’t win is because the judge always favors professionals. Unfortunately, those who cannot be objective about the qualities of their dog and the competition will never improve.

We have tried so hard to maintain “equal” opportunities or a level field – or at least that perception – that the National Owner-Handled Series was initiated. This program has essentially resulted in two different competitions at a show to “equalize” the professional and the amateur owner-handler.

So now that efforts have been made to equalize the professional and owner-handler, how do we equalize the breeds in competition to give every breed the same opportunity to win?

There are many factors that go into a winning show dog. Of course, we need to start with the very basic assumption – and you know what happens when we assume – that a dog is typey (possessing the basic characteristics of the breed), reasonably sound (conformation and mind), and presented well. And how is that last thing accomplished? You remember the old joke about the lost tourist in Manhattan – “How do I get to Carnegie Hall?” – and the decidedly directionless answer he gets: “Practice, practice, practice.”

So, what’s next? What breed have you chosen? The AKC website has a section that is designed to help people decide which breed will best fit their personality and situation. When it comes to dog shows, we usually show what our family has always owned, or we have fallen in love with a breed that simply touches our heart. And if you are lucky enough to live with the breed that you love, you are already a winner.

But are all breeds looked at equally in the ring? When considering this question some people choose to turn to which breeds have won the most Bests in Show at Westminster. As much as I think of this show as THE show, it is only one show out of thousands over the years. By the way, the answer is the Wire Fox Terrier, and the Terrier Group has won the most Bests at Westminster. Think about it: With the possible exception of Poodles, aren’t those who compete in the Terrier Group the most dynamic grooming experts? And most Terriers “stand on their tiptoes” and show their hearts out. (Yes, I understand that showmanship is only a part of dog shows and the word “showmanship” does not appear in breed standards – but it is an undeniable part of a dog show). To deny that presentation and showmanship play a part in the group and Best in Show rings is to close your eyes to reality.

And that leads me to the primary question of this article: Should only popular or showy breeds win? Are breeds winning in the group ring simply because they are “popular” and flashy? I guess the real question is, “Why can a good example of a popular breed win more often that a great example of a lesser-known breed?” Is it better to be popular or great? As one of my friends has often said, “Are we stepping over great dogs to put up good dogs?”

How many times have you watched group judging and the judge doesn’t even get to the end of the lineup when looking at the breeds in the group? How many times have you seen a judge who does not watch every breed all the way around the ring? Why is it that when a new breed is accepted into AKC, it seems that some judges are in a rush to award that breed its first group or Best in Show, while lesser-entry breeds are still left out of the ribbons? What about the breeds and breeders who have been doing it right for a long time – even if they are low-entry breeds? (And thank you for helping to save those breeds.)

I guess this is important to me because – in addition to having and loving a fairly popular breed in the Irish Setter – I have also loved, lived with and shown less prevalent breeds such as Welsh Springers, Flat-Coated Retrievers, Pointers and a Border Terrier. As a matter of fact, often popularity can begin the demise of the quality of a breed.

Why do lesser-known breeds have a more difficult time winning the “big prizes”? One reason certainly must be education and knowledge. When judges are studying breeds to add to those for which they are approved, it is much easier to find educational opportunities for the more popular breeds. When a new judge attends the Golden Retriever national specialty, he or she is sure to see a great many more dogs than when attending that of the Canaan Dog. There are more ringside mentors available at the popular breed nationals, as well as opportunities for connecting with long-term mentors. Very simply, it is easier to learn – or think you have – about the more popular breeds. So maybe the answer is that – although it might not be easy – more judges need to WANT to learn these lesser shown breeds.

And for those who are lazy, it is certainly easier to point at the well-known breed – with all its fans applauding – for group placements and Best in Show. But what of those lesser-known and less-showy breeds who may even better represent their standard than do the more popular ones? As a matter of fact, some of those flashy “ya-ya” breeds are not necessarily supposed to be that “UP” all the time. And it would be completely improper for some breeds – such as the Great Pyrenees and Anatolian Shepherd Dog – to be showy and flashy.

As a very respected breeder owner-handler said, “So how can a dog that has the temperament, as spelled out in the breed standard for that breed, for example, the Basset Hound, ‘whose temperament is mild, never sharp or timid’ compete against a Norfolk Terrier temperament: ‘Alert, gregarious, fearless, and loyal. Never aggressive.’ So we have Murphy the Basset, the mild-mannered gentleman, going up against the stand-up comedian Sparky the Norfolk! It would take a great dog person to look beyond the flash, and choose the best-quality animal. But this is a dog show,’ and many times the usual winner will win, or the flashy one, when in that same ring was maybe one of the greatest snifflehounds of all time.”

How about confidence? Wouldn’t a judge who took advantage of the availability of a quantity of education of the more popular breeds be more confident in pointing to that breed, whereas lesser educational opportunities would always leave some doubt in his mind? Would a judge who is judging Best in Show and is approved for one or two breeds have enough education in a breed in a different group to choose one of the less-popular breeds in this “alien group” for Best?

Finally, we are often the victims of trends. It seems that often a dog – or even a breed – gets “on a roll” and wins multiple groups and Bests in Show in a row. There are certainly dogs who are of high enough quality to warrant this kind of winning, BUT that does not mean there may not be others of equal quality that could be considered. I have been on both ends of this situation. I have awarded Best in Show to a dog that has won this award on other days of a cluster, and I have also not even placed in a group a dog who has won Best in Show at a cluster. It is called judging dogs on the day. There is nothing right or wrong about this – it is simply a judge assessing each dog before him against its standard to the best of his ability. It is saying, “Yes, that is an excellent snifflehound, but this lovinghound is of equal – or perhaps better – quality.” That is why we have more than one show a year. As the saying goes, “Every dog has his day.” At least, he should have that chance.

So I am not trying to be a giant killer or to protest against quality, popular, flashy breeds winning. I am simply asking that the less popular, less flashy breeds of significant quality get the same opportunity.

© Dog News. This article may not be reposted, reprinted, rewritten, excerpted or otherwise duplicated in any medium without the express written permission of the publisher.
Sat, 10/30/2021 - 4:19pm