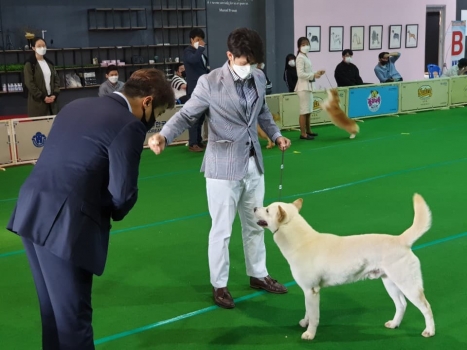 As Americans struggle with how to best respond to the COVID-19 pandemic, many are looking at the track records of other countries, from Sweden to Japan, to see if there is anything to learn from what worked there – and what didn't.

The dog fancy, divided about the best way to resume dog shows, might be well advised to do the same.

Not that there’s much to look at. Most of the international dog world is still treading water, with every week seemingly bringing yet another cancellation of a high-profile dog show.

But this weekend, the Korean Kennel Club held its first dog shows since the pandemic struck: four shows, two on Saturday and another double-header on Sunday. Each show drew about 100 dogs – just a bit lower than the typical entry for these shows when the panel contains only local and not international judges. (The KKC is one of two kennel clubs in South Korea; the larger Korean Kennel Federation, or KKF, is FCI-affiliated, and has suspended all its dog shows until June.)

We're pleased to have two exclusive firsthand accounts from the event: Handler Jay Kim, who spent time in the United States as an assistant for Frank Murphy before returning to his native South Korea to marry and start a family; and judge Daniel Hwang, who officiated at one of the weekend's shows. – Denise Flaim

This weekend, I showed dogs at the Korean Kennel Club show in Seoul.

People had to wait on a single-file line to get into the show, with required social distances marked on the pavement. (While spectators from the public were allowed, there weren’t many.) Masks were required in order to enter, and they had to be worn for the whole event.

At the check-in table, each person filled out a form with the following information: their name, the city they live in, their phone numbers, the result of their temperature reading, whether they had been abroad, whether they have any health issues, and if they had a mask.

If someone at the event is later diagnosed with COVID-19, local government officials will send a text message to everyone in that area and let them know where that person has been for the last two weeks. And anyone who has had contact with them can get tested immediately and then self-quarantine if necessary. 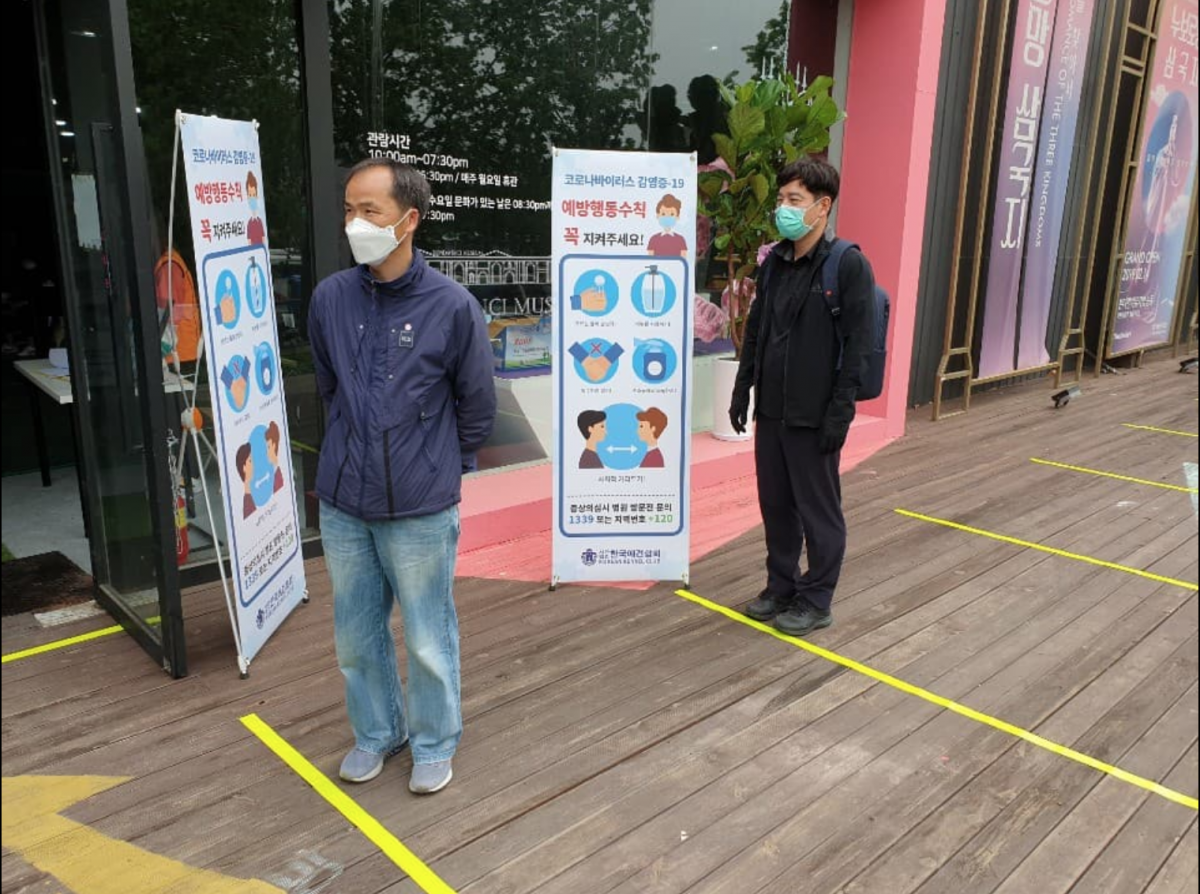 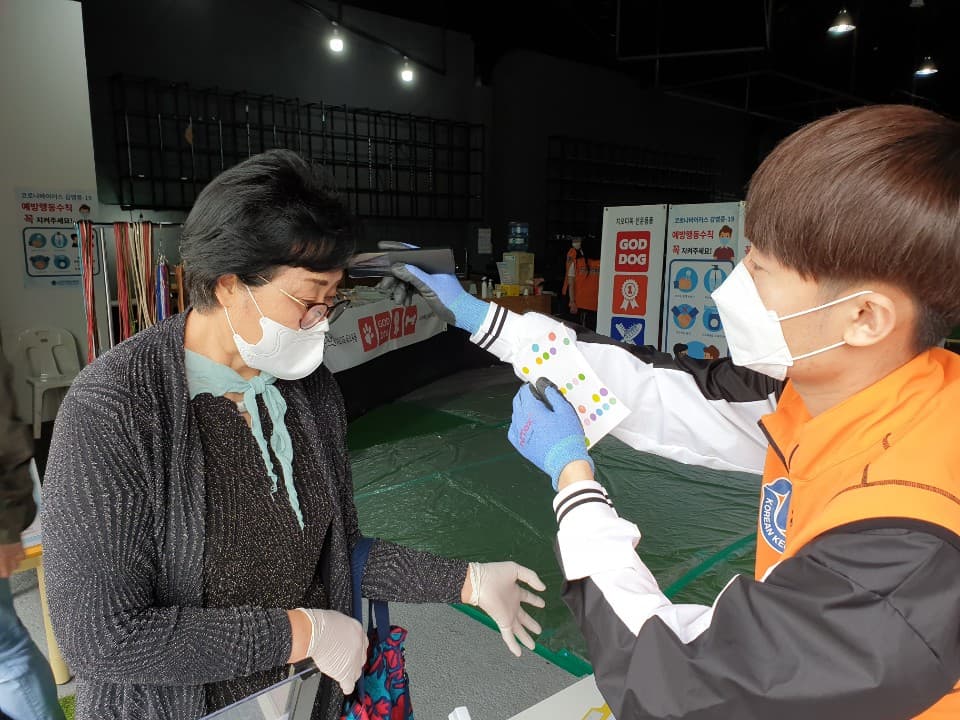 Every attendee had his or her temperature taken before entering the show. 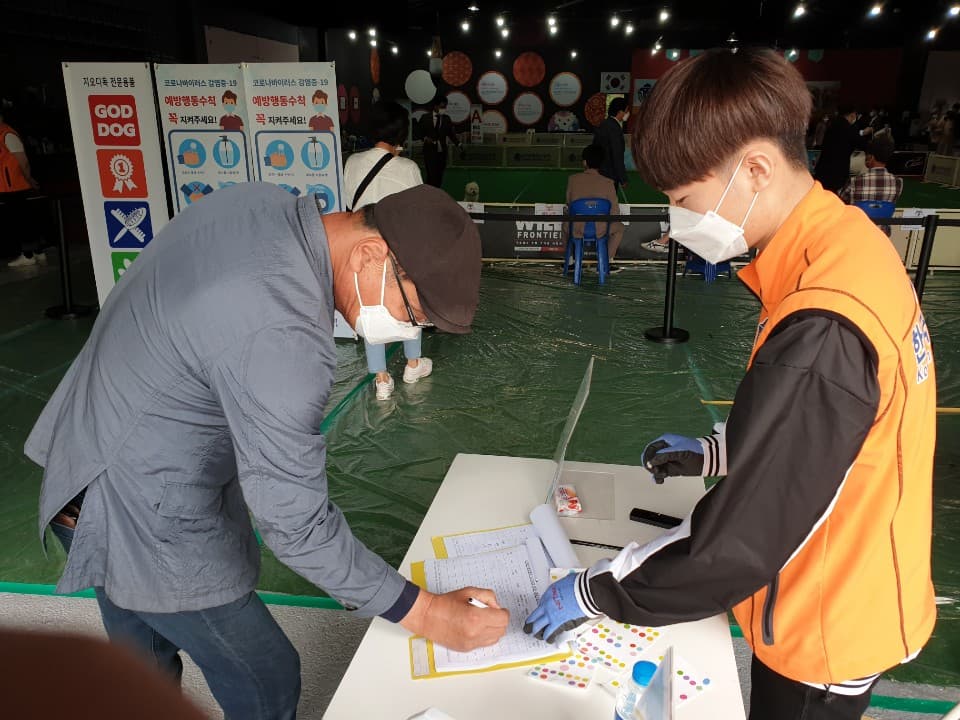 Personal information was collected to aid in contact-tracing in the event a COVID-positive person was later found to have attended the show.

I only showed two dogs over the weekend – a Golden Retriever and a Smooth Fox Terrier. I wore an N95 mask. Here in South Korea we can purchase three of these respirator masks a week through our local pharmacy, because our government reserves 80 percent of the nation’s mask production for its citizens.

Wearing a mask in the ring was harder than I expected – especially with the Golden. And I’m kind of young and in good shape. For older exhibitors, or people who need to show large and fast breeds, or handlers who have to show multiple breeds in different rings, it will be really hard. Not only was it hard to breathe, but the mask constantly fogged up my glasses, and I couldn't wear them.

It wasn’t easy, but the mask is the only way we have to protect ourselves. But next time, if I have to show four or five large breeds instead of just two dogs, I’m not sure I can do it with a mask. If we have shows like this again, I may buy a dace shield, if it provides enough protection.

As for the dogs, they really didn’t care about the masks at all. And not just my dogs – it seemed like most of the dogs at the show didn’t care either. Even sensitive breeds like the Shiba Inu and the Jindo – which is a native Korean dog that is similar to the Canaan Dog – didn’t care. 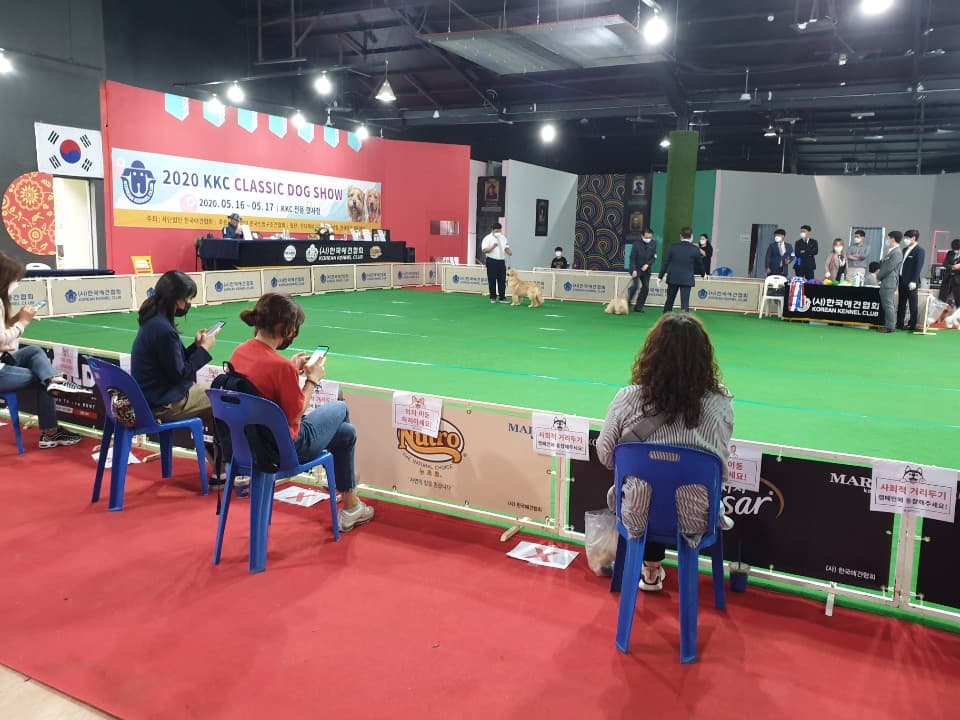 Social distancing at ringside, though not everyone complied. 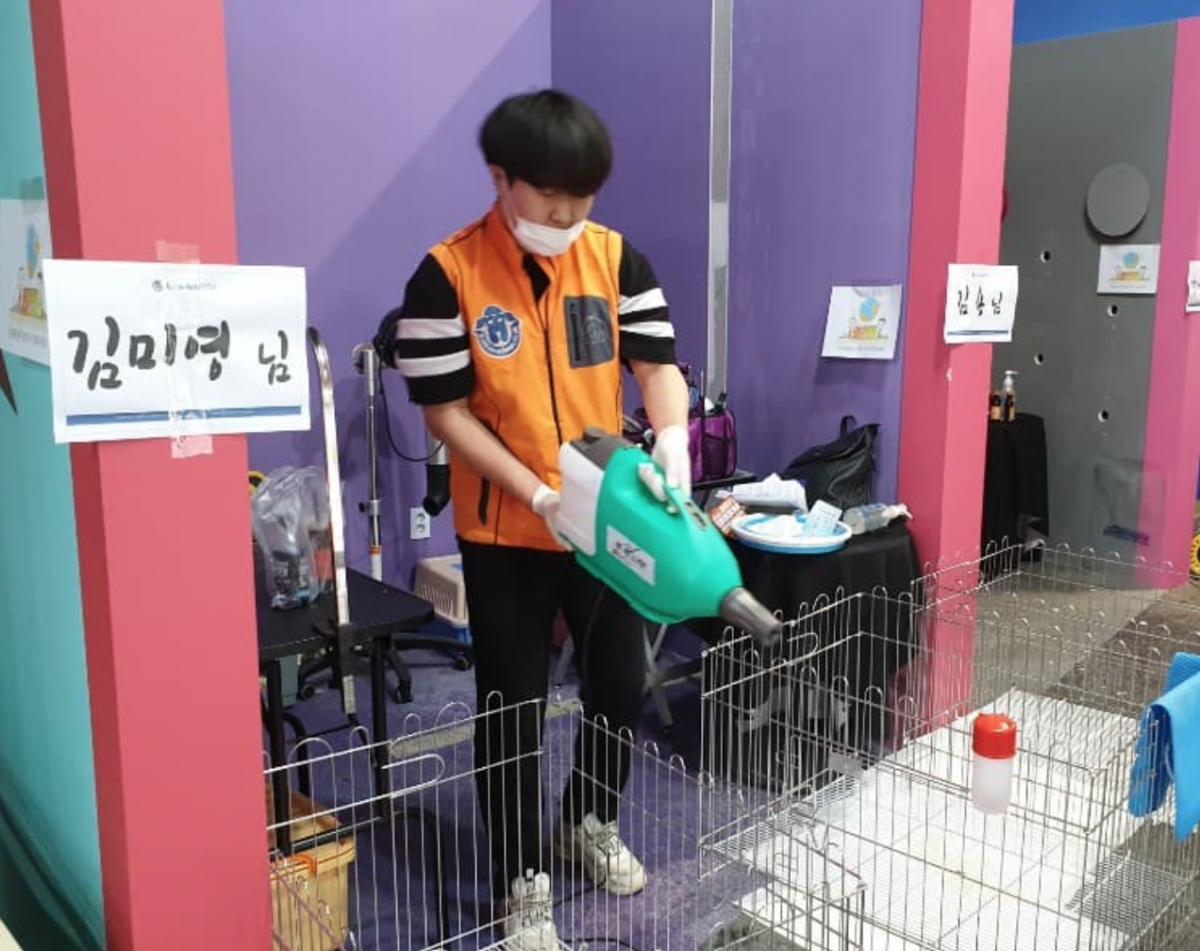 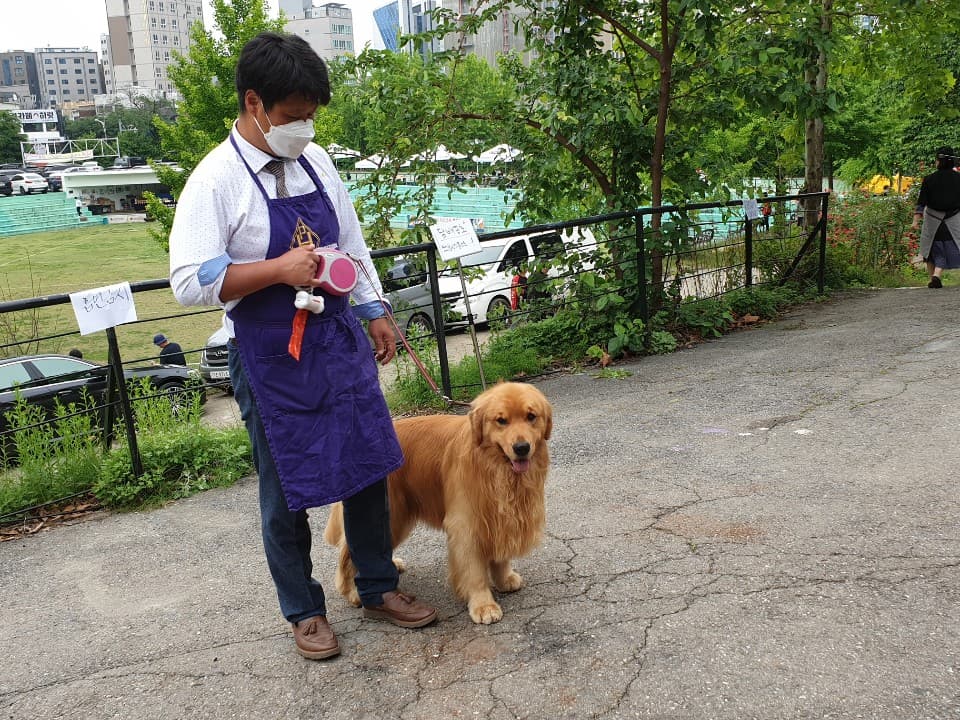 Like everyone at the show Kim had to show his dog naturally – just trimming and brushing. It didn't stop him from winning Best in Show, and Reserve Best at the three remaining shows.

There were four judges all weekend – one for each show – and all wore masks while they judged. Social distancing was of course impossible, and they took breaks to apply hand sanitizer, though not after each and every dog.

For exhibitors, using hair dryers and even hairspray was not allowed. The grooming areas had walls between them, and the aisles were marked with one-way arrows, so you could only walk in one direction. Disinfectant was regularly sprayed around the show area.

I was surprised to see that there were some young children at the show. I wouldn’t even think of taking my 19-month-old son into this situation. Each night, when I came home from the show, I got into the house through the back door, ran to the shower, and then saw my family. 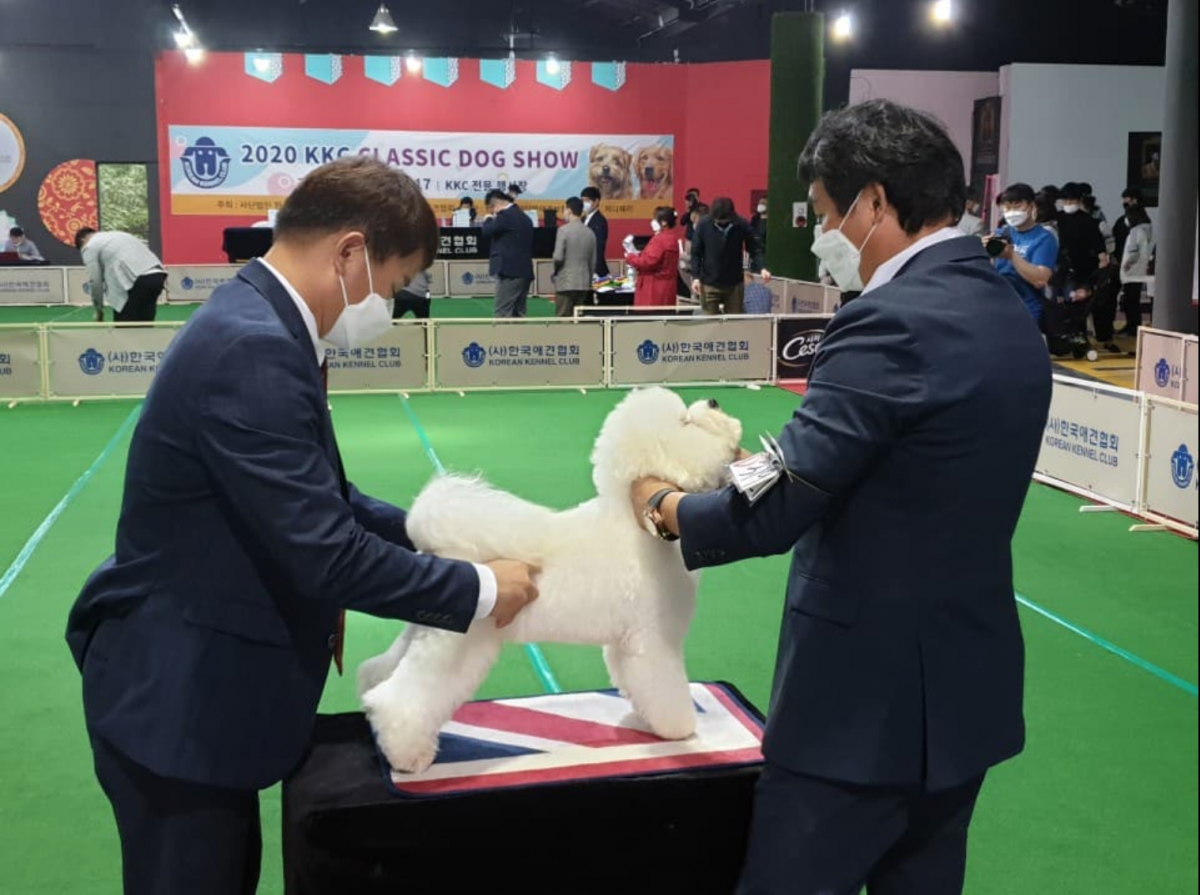 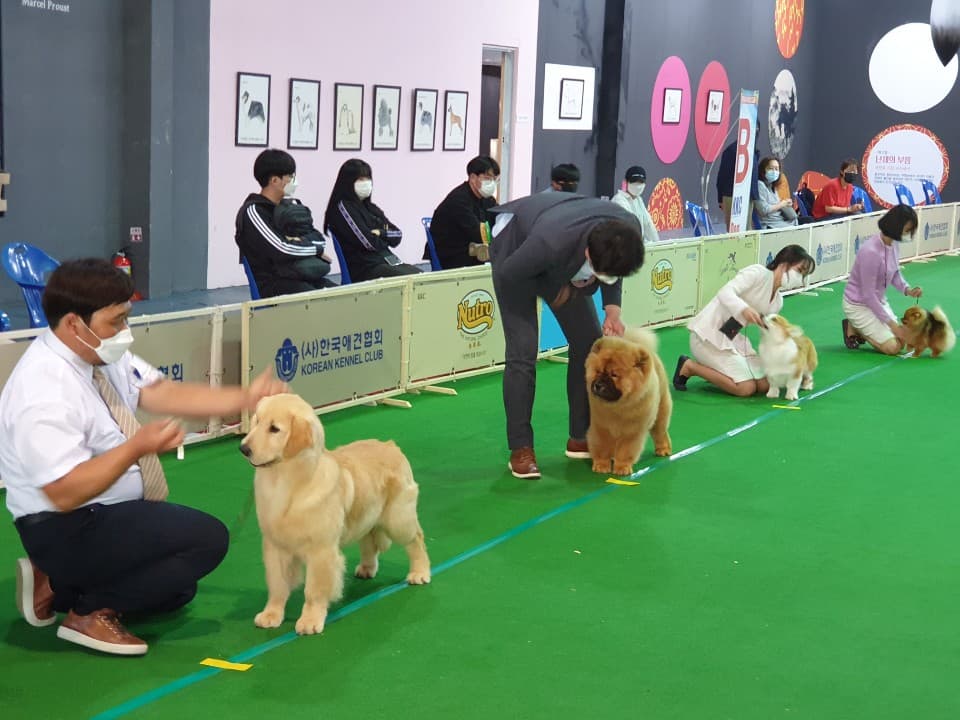 Tape on the floor marked appropriate distances between handlers and dogs.

Inside the show, social distancing of two meters – a little more than six feet – was required. But I saw people talking closely together, even though the KKC kept announcing that people needed to keep their distance both days. It might take a while for people to get used to that. Besides that, most people followed the rules. Some handlers had a hard time figuring out how much distance they should leave between themselves in the rings, so on Sunday the show committee marked the rings with tape.

Was the show a success? I’m not sure yet. Ask me in another two weeks. If nobody gets infected by then, then I’d say it was. 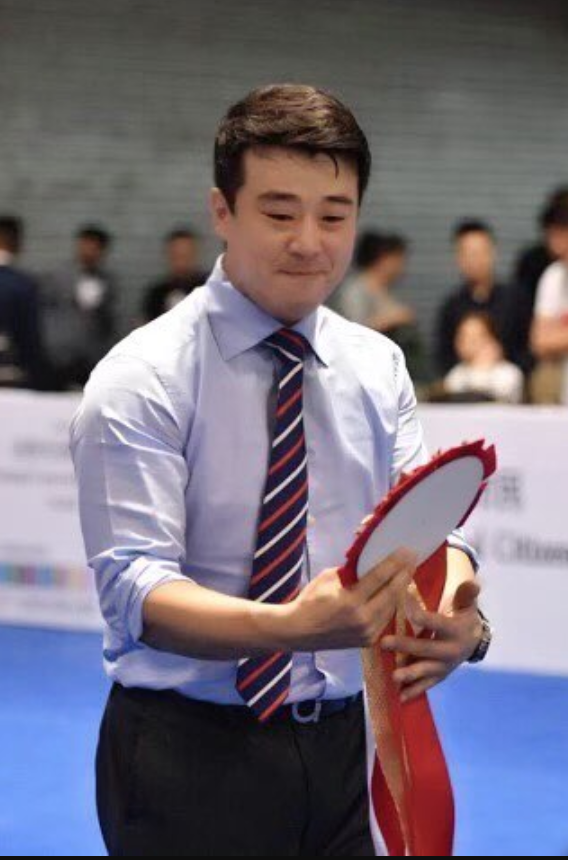 Daniel Hwang acquired his first purebred dog, a Siberian Husky, in 1996. An active part of the dog fancy in South Korea, he has earned more than 30 Bests In Show and numerous Reserve Bests In Show and Group Firsts. A licensed judge in the Korean Kennel Club, Hwang currently chairs the club's of international affairs committee and is a coordinator of judges education.

Daniel Hwang took some time to reflect on his assignment and answered these questions for Dog News:

How difficult was it to judge while wearing a mask? It was like trying to breathe through a whole bunch of cotton balls. But I wear a face mask every day and everywhere I go, so it was not that difficult, and, fortunately, the weather was not that hot.

However, it’s reasonable to foresee that wearing a mask while judging in summer could be dangerous, since the physical barrier of the mask makes it harder to take in air. It also traps some carbon dioxide as you exhale, which means you end up breathing in air that is warmer and moister.

Was the experience better or worse than you expected? I would mostly say better, because all the exhibitors wore masks all the time and followed the rules. However, it was difficult to get exhibitors to maintain the recommended six-foot social distancing from others, so our club decided to mark where exhibitors and dogs should stand in the ring.

What would you have changed about it? I would let exhibitors get their ribbons by themselves after judging. It might be the good way to prevent the spread of the virus. 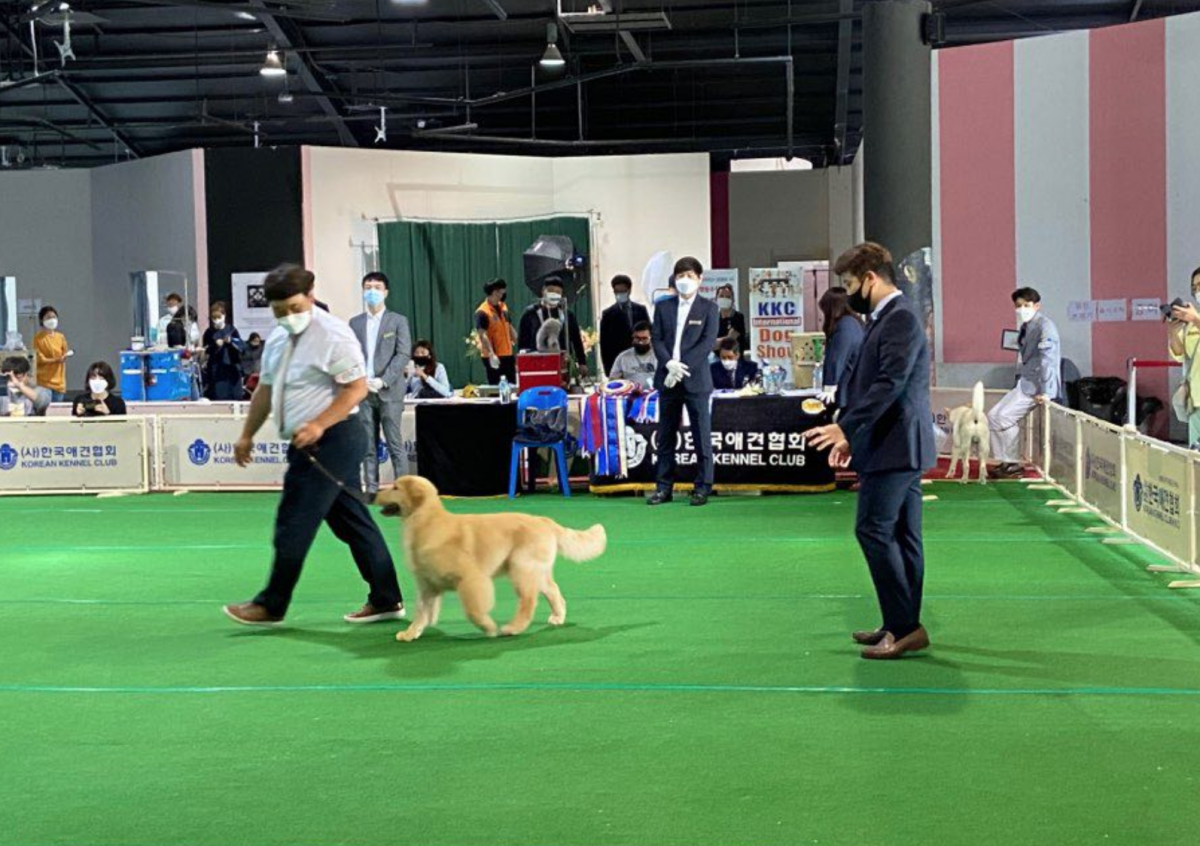 If this is the “new normal,” at least for the foreseeable future, do you think the dog world can adapt? The purpose of wearing a mask, not using dryers and social distancing at the show is to reduce the chance of infection among high-risk populations. I believe the dog world can adapt to it, if they want to continue to have shows as we did in South Korea before there is a vaccine or a potential treatment. As for living without hairdryers, people will find a way to keep their dogs groomed and tidy, just as they did in the 1950s, ‘60s and ‘70s, before electricity and generators were available at dog shows. If the exhibitors and handlers want an event to show at, they have to make some accommodations, or they will wait longer for things to resume.

Most people find that it takes a few days to adjust to wearing a mask, and for those with pulmonary issues like asthma or COPD, the accommodation period can be longer because of the increased sense of breathlessness. I would suggest trying to wear the mask at home for short periods to get used to the sensation before you judge.

If you really don’t want to wear a mask, please, wear a plastic face shield. It also provides facial protection as well as being reusable and more comfortable. It also prevents wearers from touching their faces and makes it easier to communicate with others, since the mouth is visible.

I wore medical gloves during the show but it was quite easy for my hands to get sweaty, so I really wanted to take gloves off. I would recommend bringing extra medical gloves with you and changing them often.

© Dog News. This article may not be reposted, reprinted, rewritten, excerpted or otherwise duplicated in any medium without the express written permission of the publisher.
Mon, 05/18/2020 - 12:55am