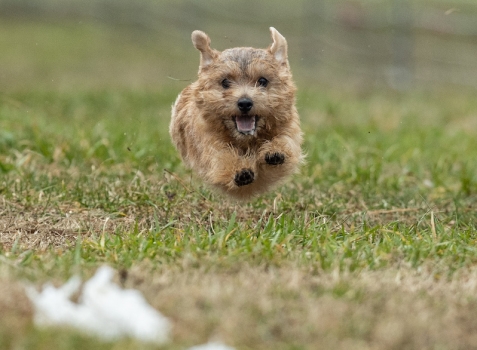 Small but spunky, the Norfolk Terrier is a lot of dog in a spirited package
By
M.J. Nelson

“Fearless and independent yet having the softest terrier temperament.”

This description of the Norfolk Terrier seems like a contradiction in terms. While their personalities and small size make them appear to be an ideal lapdog, make no mistake: Norfolk Terriers are real terriers with all the instincts of a hunting dog. If you have one, odds are excellent that your home and premises are rodent free. And in addition to being good hunters, Norfolk Terriers also successful in a wide range of other dog sports.

“They have a lot of prey drive and, no pun intended, tunnel vision,” she continues. “When harnessed to an activity that they see as worthwhile, they really take off, both literally and figuratively.” 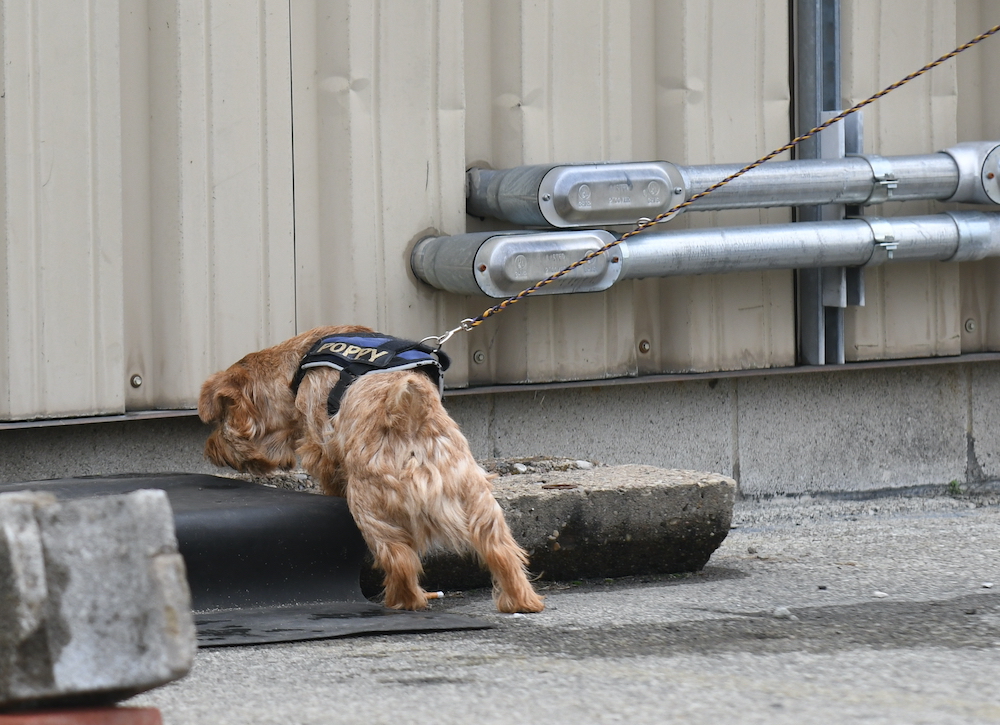 Peggy Metcalf went from Chesapeake Bay Retrievers to Norfolk Terriers when her son wanted a rough, tough little dog but she hadn’t abandoned her desire for a hunting dog.

“As Norfolk breeders, we should never forget the history of the breed and should endeavor to retain its natural hunting instincts,” she stresses. “Earthdog tests are for the pure enjoyment of people working their dogs in an activity that has come down through the generations and is an activity based on the Norfolk’s inherent desire and willingness to hunt.”

Metcalf’s dog Mac (Ch. Flurries Mackinac Point BN CD RA CAX TKI RATO AWTA CT EE2 CGC) was the epitome of the working earthdog. He went through junior, senior, master and endurance earthdog without a miss. He lived to hunt and never let her down. But some of Metcalf’s success with Mac likely came because of the mistakes she made with her first dog.

“I rushed that dog, and due to my hurry, I ended up having to work four years and go to 32 earthdog tests to earn the fourth and final master qualifying score,” admits Metcalf, who also owns Pivot (Ch. Flurries Turn Point Light CD RAE OAP OJP CGC). “I learned my lesson, and after that I always took my time teaching the correct removal process to all my other dogs.” 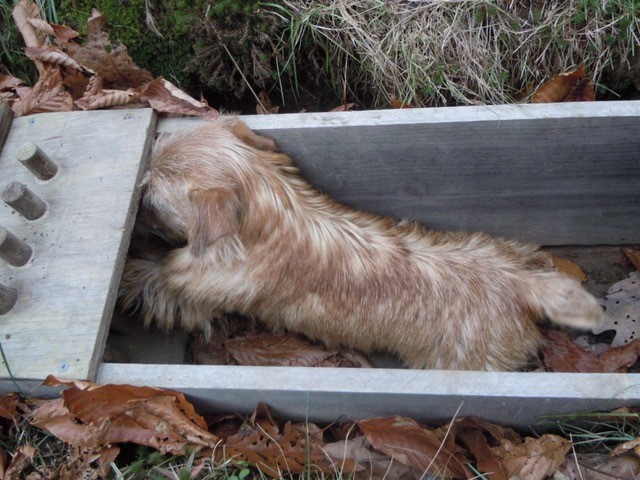 Linda Federici acquired a love of terriers from being around her aunt and uncle’s Jack Russell Terriers, as they were called then. While they were just a little too much terrier for her, the Norfolk, by contrast, seemed a perfect fit.

“I liked the idea that there aren’t that many of them, that they are independent, and they liked being around people but not on them,” she says of the Norfolk. “I was really attracted to their personalities and their attitude. I found that they have confidence, are virtually fearless, and are certainly very agile.” 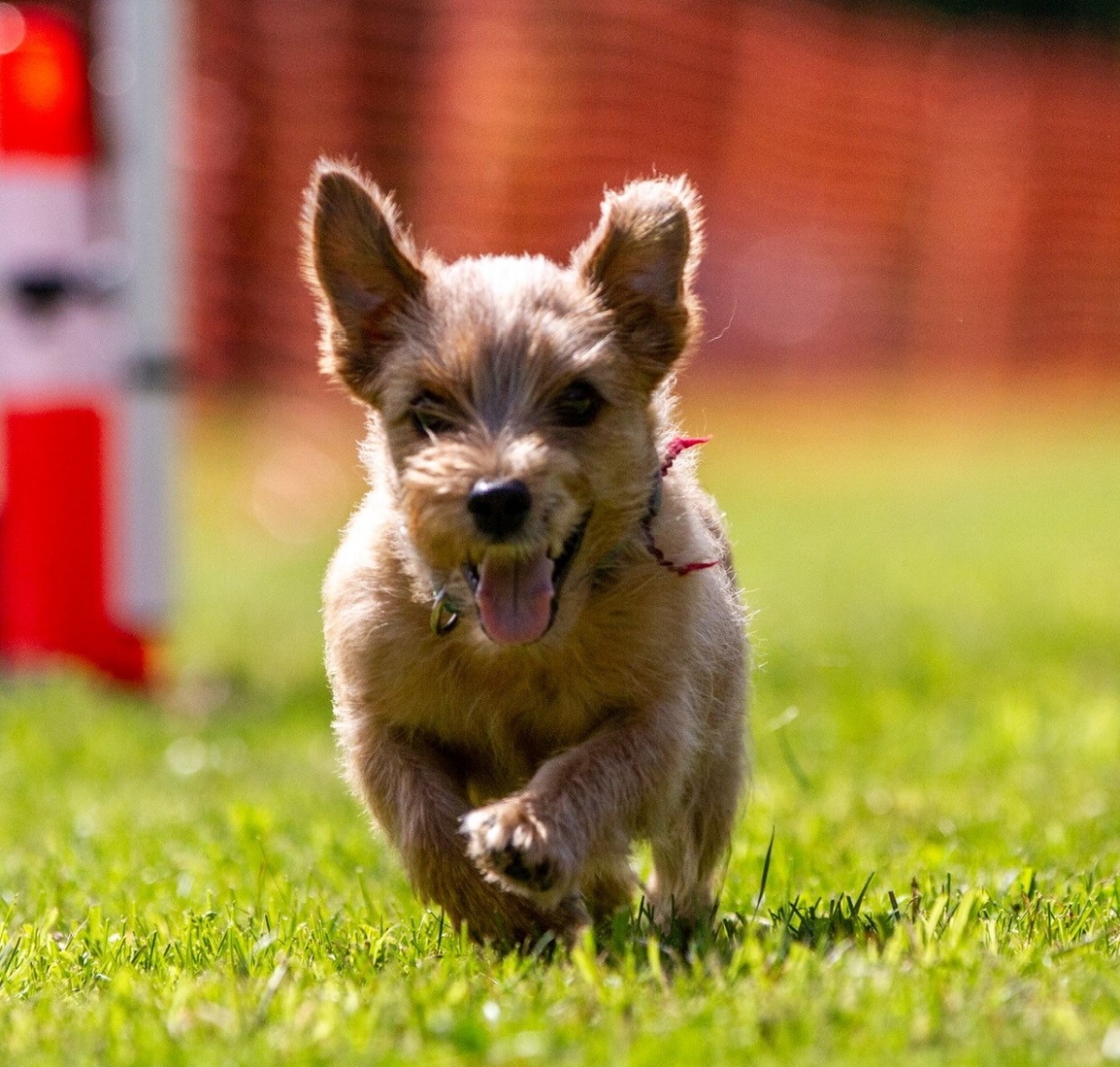 “You have to put your trust in the dog’s nose. Yes, it’s a partnership, but the dogs have all the control,” she says. “These two sports highlight how the Norfolk is a confident, independent worker – plus they have the drive and ability to follow the task to its completion.” 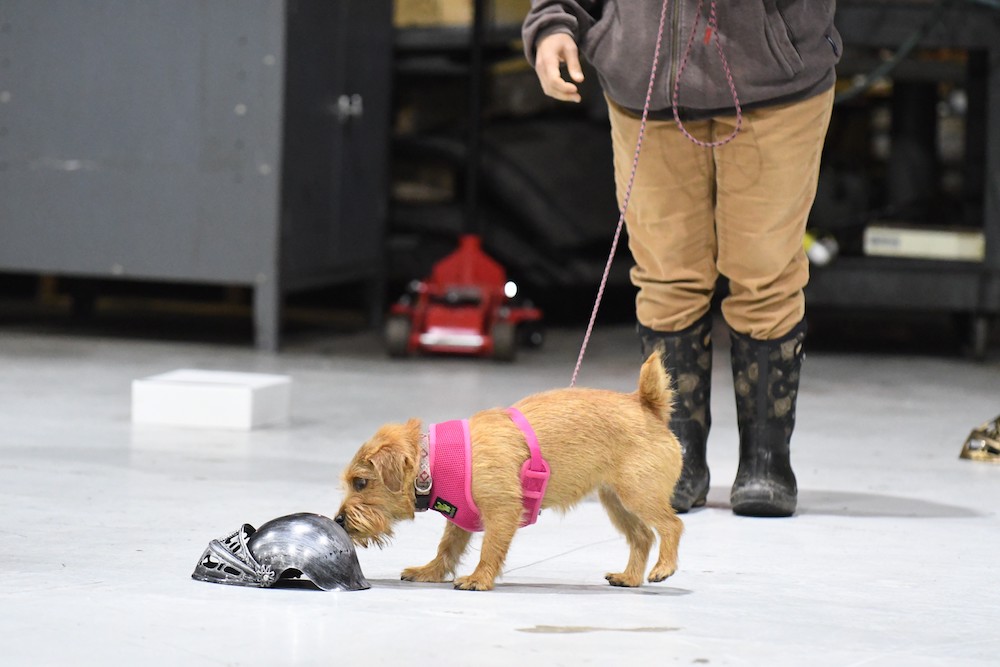 Margaret (Meg) Lockwood has had Norfolk Terriers for more than 20 years. While all her dogs get exposed to a lot of different dog sports to gauge their interest, she starts the young dogs in trick work and some obedience while they are still being shown in conformation.

“Norfolk Terriers seem to be very good at learning tricks. I believe it’s because they get frequent re-enforcement and enjoy figuring out what will get them to the ‘click’ and the treat,” says Lockwood, who starts all her litters on clicker training before they leave her house. “Many of my dogs have earned trick titles as puppies, and as an AKC evaluator and professional trainer I’ve seen many of my clients’ Norfolks also do very well in trick work.” 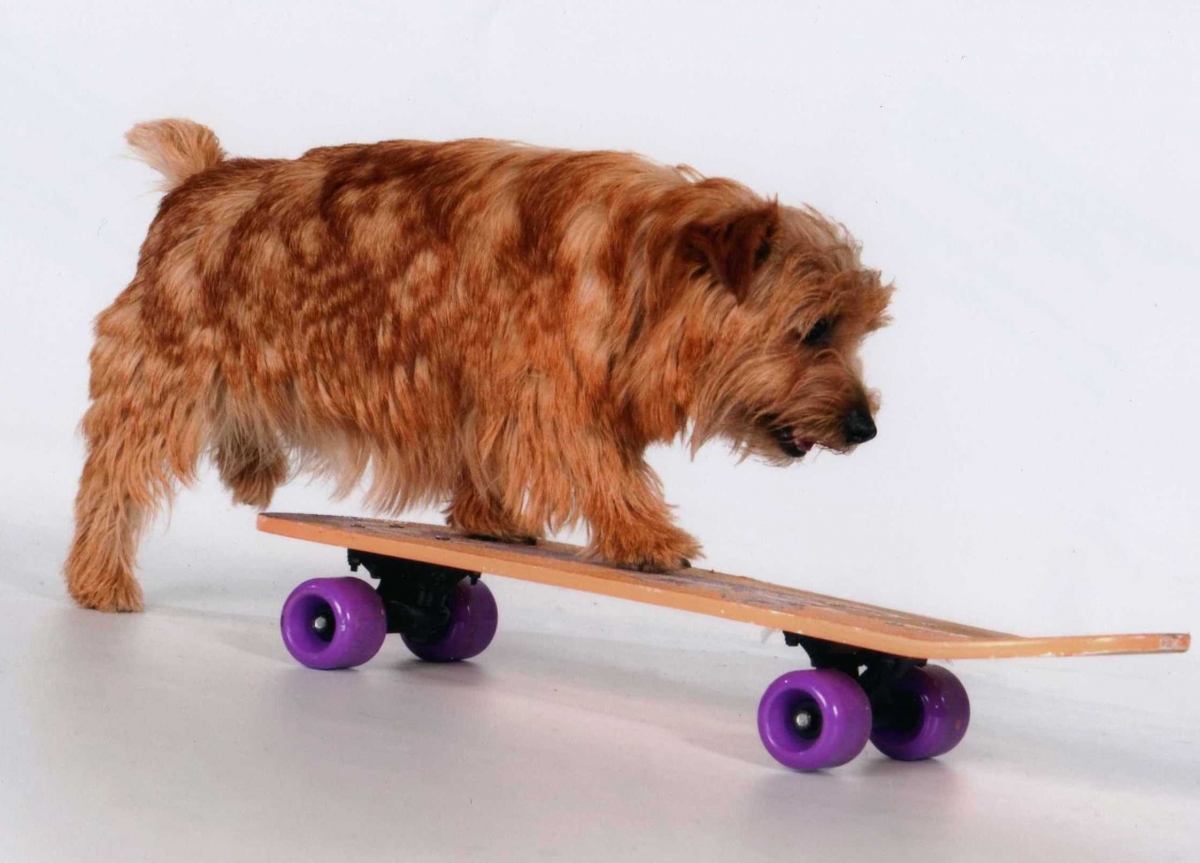 Lockwood notes that due to the breed’s drive, they can be a bit “wild” as youngsters in the show ring. But their drive and excitement show their type well, and if they are positively trained, they can do just fine in both rally and obedience.

“Actually, they love to be busy and enjoy challenges and new experiences,” she says. Two of her current Norfolks – Pumpkin (Ch. Locklan Pumpkin Spice Latte SWE CGC TKE) and Pepper (Ch Avalon’s I Walk the Line at Locklan SCN SIN SEN) – introduced her to scent work.

“I found they do very well in that sport. I’ve also found they really excel in the buried scent work, which is no surprise, because they love sand and water,” says Lockwood, who also owns Sissy (Lochlan Double Time BN RN). “Because of them, I’ve become educated in the sport and became a prospective AKC scent work judge this year.” 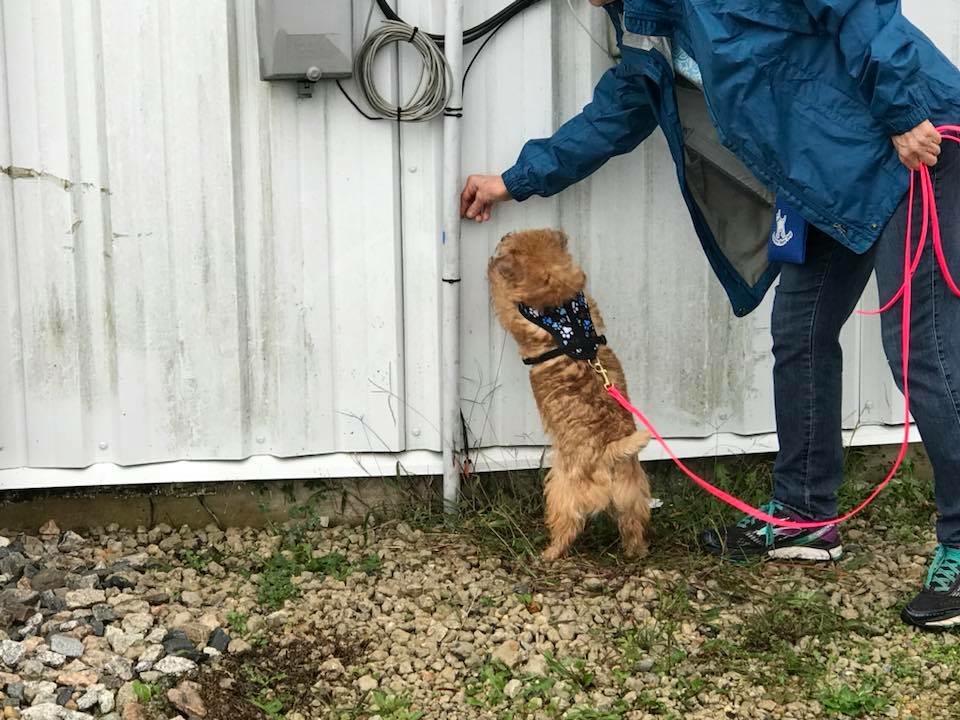 As is almost always the case, the path to a title in any dog sport presents some obstacles. For Kravetz, a problem she encountered with Tally (Tally Ho-Ho-Ho ME OA OAJ MXP MJP2 NFP), her second Norfolk, was that she was not accepted for agility class in the local dog club.

“They thought she was too reactive, which she was not,” Kravetz says. “She was just behaving like a terrier, and this was a group of Doberman obedience folks. So I simply went elsewhere and ultimately, when the agility ‘management’ changed, returned to the local club.” 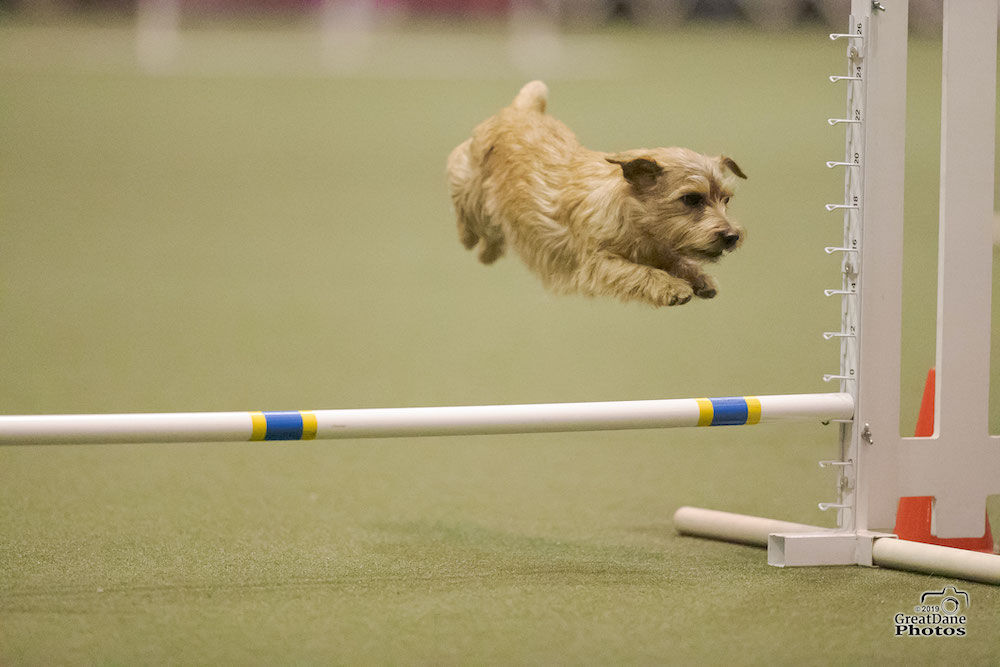 Tally went on to the 2006 AKC Invitational as the first – and, at that event only – Preferred dog. “Finding a good training facility and good instruction near you can be difficult,” Kravetz warns. “There is some very helpful online instruction, but I don’t believe that is ever as effective as in-person training.” 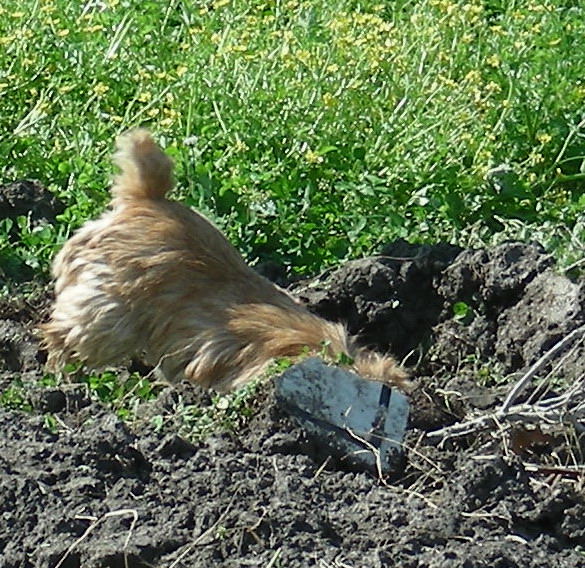 Tally (Tally Ho-Ho-Ho ME OA OAJ MXP MJP2 NFP), owned by Kravetz, was not accepted in agility class. She went on to be the first Preferred dog in the AKC Invitational as well as a Master Earthdog.

“Bingley was great in agility at the beginning and then lost interest,” Kravetz remembers. “She would be fine in class, but not at a trial. I tried every method known to help her through it, but in the end, we just gave up. She also had no interest in rats in a tube, so earthdog and barn hunt weren’t something she wanted to do, although she had plenty of interest in backyard hunting, where she was absolutely fantastic.”

Bingley loved and excelled in lure coursing, however, and became a champion dock diver before the AKC partnered with NADD; Kravetz says she loved chasing her rubber chicken into the water. Bingley went to the Dock Dogs National Championship in 2008 and to date is the only Norfolk Terrier to have competed in this event. In her sunset days, she found scent work to be fun.

“Like the old Kenny Rogers song ‘The Gambler’ says, ‘You gotta know when to hold ’em and know when to fold ’em,’” Kravetz reminds.

Federici says she had some issues with one of her dogs at the higher levels of scent work.

At that level, “dogs have to work through distractions, and the hardest for one of my dogs was food,” she says. “Instead of finding the odor she was supposed to be looking for, she was trying to get me to believe she had found the odor when what she was finding was the food.”

As a result, Federici had to change her training: By putting the odor the dog was supposed to find next to the food, the dog quickly learned she could only get a reward for finding the odor, not the food.

“So, when she was searching, if she found the food, I would not make any noise, no reward of any kind was given until she moved from the food to the box with the odor,” Federici explains. “When she did that, I gave her a big treat and lots of praise. This is how we were able to overcome that issue and move to the next level of titles.”

She adds that her dogs loved training for agility best, but when they get to the higher levels, they were not fast enough to make the course time.

“The last one I had in agility had fun in the lower levels, but when we moved up to the higher levels she started not wanting to run. She would come into the ring and her tail would drop.” That, to Federici, was an indication she was not happy. “I tried running her several times and could not get her to run at the speed she needed to qualify. So, I did not pursue it. I am not big a fan of the sport either, so we moved to something different with her.” 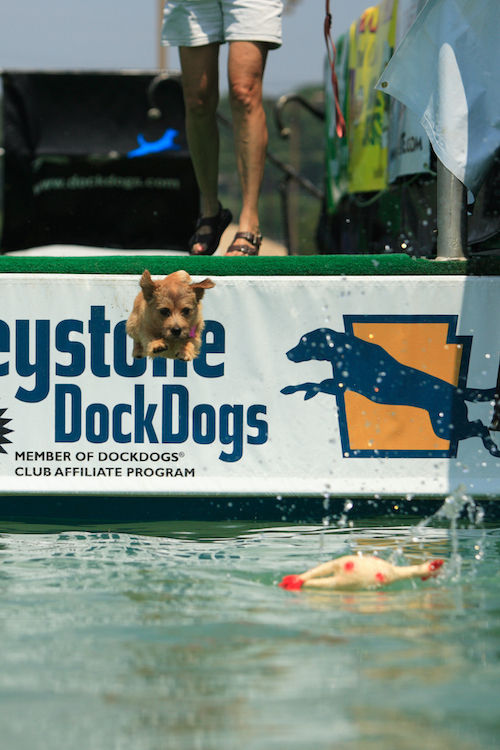 The Norfolk Terrier breed does face some challenges, one of which is a small gene pool.

“Our devoted breeders are doing their level best to breed dogs that are true to our standard. But we always need to remember that form should follow function, both in the show ring and in the field as we perpetuate this wonderful breed with careful, well-planned matings,” Metcalf says. “The future of the Norfolk Terrier does not solely lie in the show ring, but also in its continued ability to do what it was meant to do. Our breeders have the future of the breed in their hands, and one thing that they need to do is educate and support puppy buyers to show dogs, not just in conformation but also in dog sports and, just possibly, some day become devoted breeders themselves.”

Kravetz agrees, noting that the Norfolk Terrier is now considered an endangered breed, with fewer and fewer new breeders coming into the breed.

“Another issue we face is having dogs capable of being successful in both the show ring and in companion or performance sports,” she adds. “I feel very strongly that dogs ought to be doing something. I understand the challenges of doing performance if you have a dog out with a show handler, but it can be done. I also believe that in order for a dog to be a grand champion, that dog ought to have some letters behind its name as well as in front.”

© Dog News. This article may not be reposted, reprinted, rewritten, excerpted or otherwise duplicated in any medium without the express written permission of the publisher.
Fri, 10/08/2021 - 6:48am