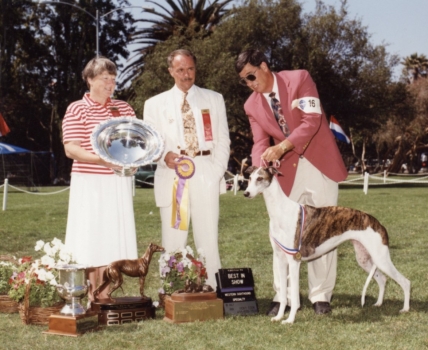 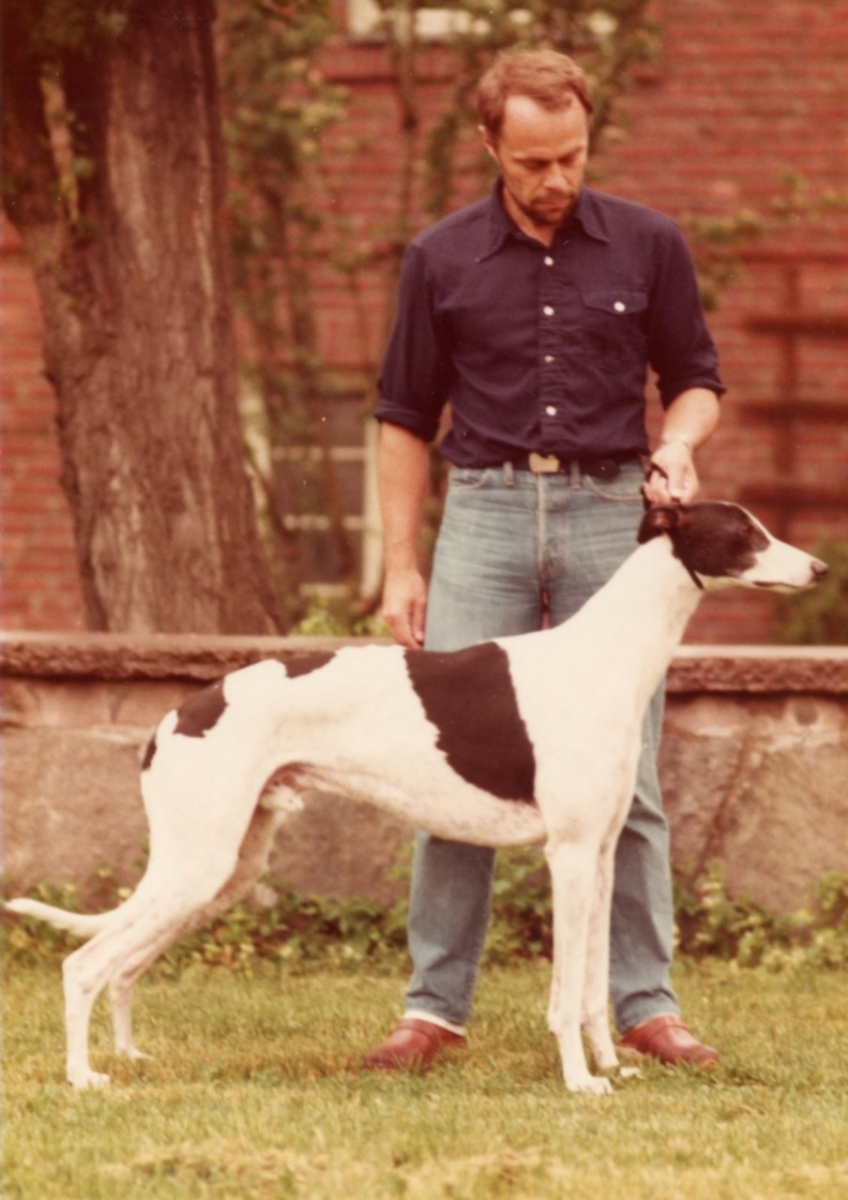 The all-rounder judge Dr. Göran Bodegård died in Stockholm in his native Sweden in late March, shortly after his 80th birthday. He had been plagued by ill health for several years and underwent at least two very complicated surgeries for his back pain.

Göran's first dog, when he was only 13 years old, was from one of the first Scottish Deerhound litters bred in Sweden. She became a champion, as did later imports from England and dogs he bred from the only bitch who produced puppies, but although Göran maintained a soft spot for Deerhounds he was unhappy with its lack of fertility and the quality he got and soon switched his attention to Greyhounds.

The first Greyhound litters were bred jointly by Göran and me. We leased a bitch from the already famous Sobers kennel, then located outside Stockholm and owned by the present breeder's grandmother. The first litter, born in 1966, included the famous red bitch Int. Ch. Guld, dam of more than 20 champions, several of them in the U.S. Her granddaughter Int. Ch. Piruett was BIS at the international show in Stockholm and produced Göran's pride and joy, the great sire Int. Ch. Psykotic (see photo, above left). A litter sister of Piruett bred to Psykotic produced Ch. Markurell, whose son Ch. My Adventure was exported to Gloria Reese and won a Greyhound Club of America specialty under Lee Canalizo in 1990.

The high quality of the breed in Scandinavia owes a lot to Göran's influence, especially through Guld. His last Greyhound litter, born in 2011, had more than 70 lines back to her and included several champions, one of them them Am. Ch. Atlantic, owned by Maureen Lucas and sired by a Lochinvar champion she had bred. Atlantic was WD at the GCA Eastern specialty 2013 under Desi Murphy. Fellow international judge and Greyhound breeder Espen Engh writes from Norway: "It's a cliché, but for our breed here in Scandinavia, this really is the end of an era." The foundation bitch for Espen's famous Jet's kennel was a daughter of Guld.

As Göran lived in the city, keeping dogs and breeding even an occasional litter, usually with a rotating cast of co-breeders, was one reason he soon turned to judging. He was approved for all FCI breeds, judging all the top shows in Scandinavia, including BIS at the famous Skokloster Sighthound show and likewise at the Swedish KC big international show in Stockholm. He judged regularly in Great Britain, including several times at Crufts: I remember him judging Deerhounds there in 2008 and Whippet males in 2018.

Göran awarded BIS at the Welsh Kennel Club in 2016 to the white Standard Poodle Ch. Afterglow Tyrone Power, later BOV at Westminster. His last assignment in the UK was at Southern Counties championship show in 2018, when he judged the Hound, Terrier and Toy Groups.

Göran obviously had a thing for white Poodles: judging at the FCI Asia international show in 2008 he had two Smash Toy Poodles as BIS King and BIS Queen (Best Dog and Best Bitch in Show.) Also, during the AKC National Championship weekend in 2007, when it was still held in California, Göran awarded BIS at the weekend's first show to the white Standard Ch. Brighton Minimoto, handled by Chris Manelopoulos (below). He also judged Best Bred-By-Exhibitor Hound at the AKC National Championship itself. 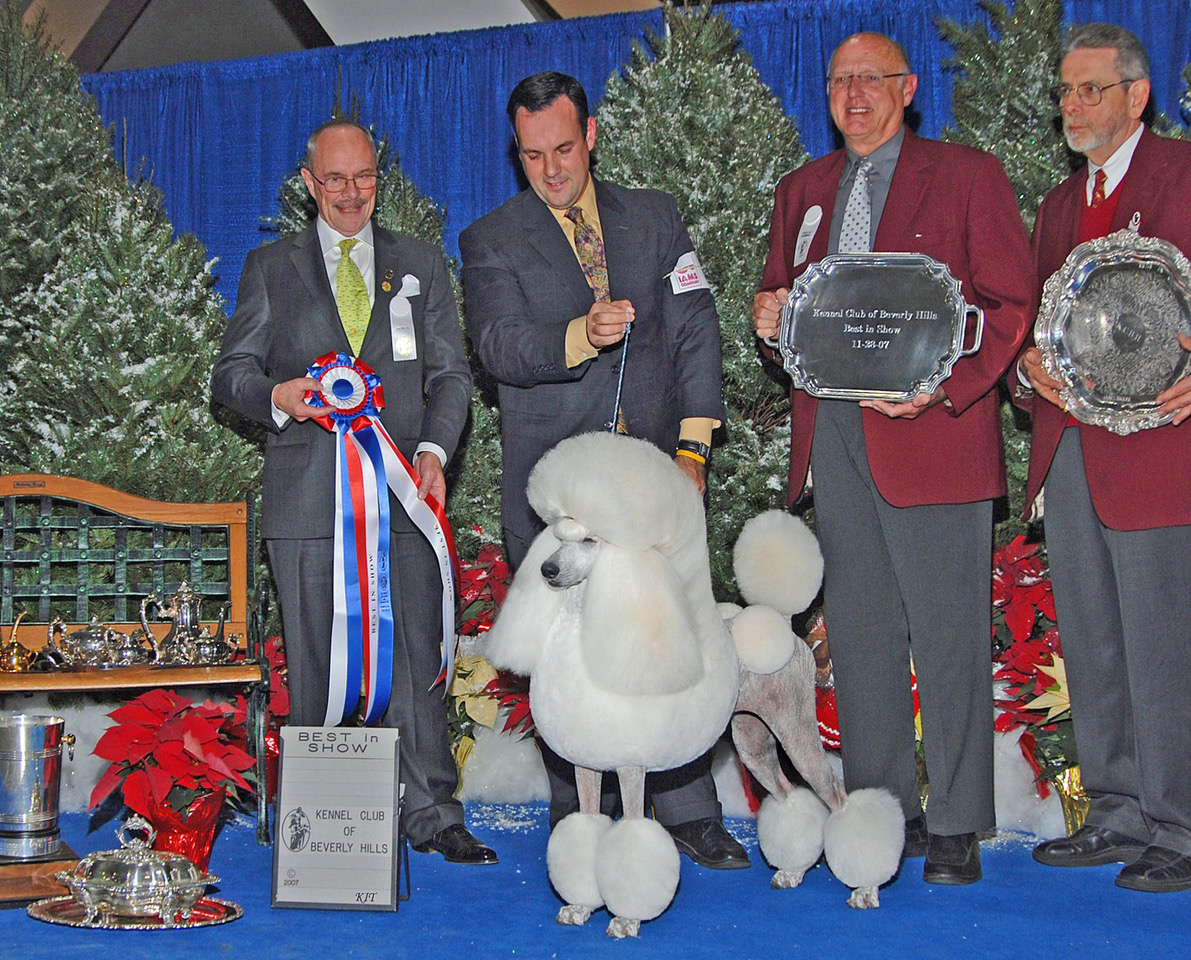 Göran with his BIS winner at the KC of Beverly Hills during the AKC National Championship weekend in 2007, Standard Poodle Ch. Brighton Minimoto, handled by Chris Manelopoulos. Photo Kit Rodwell.

Göran judged at Santa Barbara KC in the "good old days" — in 1987 he had a record entry of 79 Greyhounds and 81 Irish Wolfhounds. He came back to judge the Greyhound Club of America specialty twice: in 1991 he awarded BOB to Ch. Wilrick's L'Elegante, and ten years later BOB went to Ch. Greycott Happy Times. Judging Whippets in 1991 he put up a young Ch. Starline's Claim To Fame to BOB: she later won her — and handler Mary Dukes' — first BIS. When Göran judged the Irish Wolfhound Club of America national specialty in 2003 his BOB was Linda and Jamie Souza's Ch. Oxmoon Brogan of Limerick, handled by Jamie.

Göran was a member of the Central Committee of the Swedish Kennel Club and president of the Swedish Greyhound Club. Outside of dogs he was nationally known as a pediatrician, psychoanalyst and child psychiatrist, involved in research and clinical work with seriously ill and disturbed refugee children from the former Soviet Republic.

Incidentally, none of the dogs that Göran bred ever had a kennel prefix. We discussed his decision not to use one many times. It makes tracking his breeding program difficult, but was just one of many little idiosyncrasies that you came to associate with Göran.

Göran was my oldest friend in dogs. I have known him since 1963; he was a little older but much more experienced in the ways of the world. Not always an easy person to be friends with, Göran was described as a mixture of "genius and crazy," which pretty much sums him up. After I moved to U.S. we saw less of each other but stayed in touch regularly via email. When I saw Göran last summer at a show in Norway he had difficulty walking but nevertheless fulfilled his assignment with his usual spirit — and somehow persuaded the organizers to serve him breakfast in his ring before judging!

﻿We were meant to meet again at the Stockholm show in December, but it was not to be. I will miss Göran a lot; he leaves a big void, as only someone you have known most of your life can do.

© Dog News. This article may not be reposted, reprinted, rewritten, excerpted or otherwise duplicated in any medium without the express written permission of the publisher.
Mon, 04/06/2020 - 6:50pm