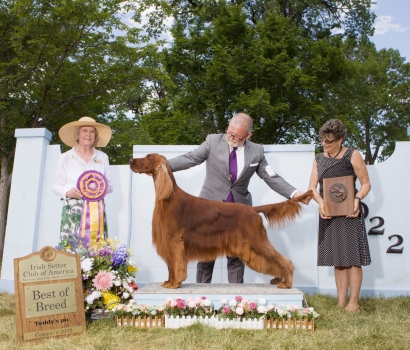 The Third Time's a Charm

The Irish Setter Club of America’s 49th National Specialty, held June 6 to 11 in Greeley, Colorado, was actually the 2020 national, which was originally planned for Spring 2020 in Colorado, and then fall in Colorado …

But you all know that story — Covid-19 restrictions prevented it from taking place. In 2022, with the same judging panel, and much anticipation, it finally did! And it was AMAZING.

Kudos to the Irish Setter Club of Colorado and very special thanks to the Greeley Kennel Club, and in particular Dick Quaco, for all their assistance to ISCA. Our president, Debbie Davis, took on the enormous dual role of show chair. If it takes a village, nowadays it takes a village and then some to hold events together, particularly over the course of almost three years.

Plans that had been made for 2020 were reincarnated, and my friend Debra Hamilton and I decided we would drive the 3,395 miles round trip. Having a dog on board meant stopping more frequently, and Debra and I actually decided it was a good thing — getting out, stretching legs, and unbending knees! We “woohooed” as we crossed state lines, stopping each day after nine hours of driving, and made it to Greeley in three days. We were very happy to arrive at the Doubletree in downtown Greeley. 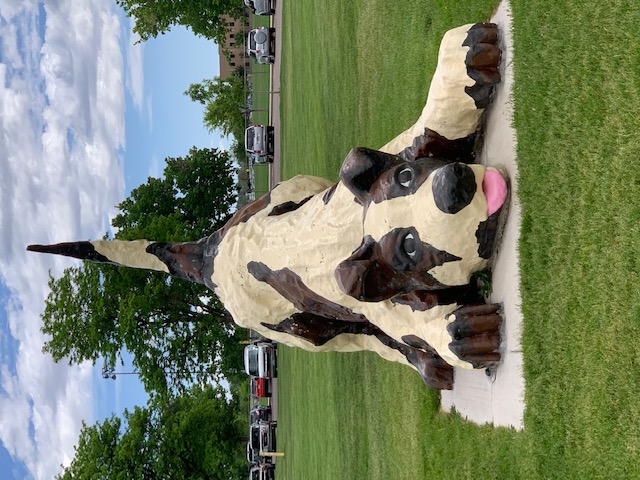 Saturday was a day for errands, and on Sunday we hopped up, walked the dog, and headed over to the Greeley grounds at Island Grove Park. As you enter the park, you are greeted by a HUGE painted dog. He was probably photographed more than the dog show. The park is beautiful, with lots of space, and the motorhomes were pouring in. Our board meeting started in the early morning, outside on a lovely porch, with a full agenda, including next year’s National location (Lexington, Kentucky), discussing new AKC regulations, and in general making sure that the club’s future remains stable. Everyone on this board is a working member, and it was a great opportunity to see how all projects were going.

Suddenly Monday was upon us, and our Agility Irish headed offsite to the Progressive School for Dogs. The event was chaired by Shelly Marx and judged by Deborah Funk, and there were two trials.

In Agility trial #2: Regular HIT went to GCh. Galewinns Me Two ACT2, bred by Pam Gale, Debbie Murray and Laura Edwards, and owned by Susan Mikula. In Preferred HIT, the winner was GCh. MACH5 Redtale Time Flies When You’re Having Fun CD BN RA MH MXB2 PAD MJB2 PJD MFS TQX T2B4 CGC TKA, bred by Pam Gale and Debbie Murray and owned by Debbie and Melissa Suter. He was handled by Melissa. This dog also won the Biathlon! Congratulations to all participants who jumped, weaved, tunneled and paused on the yellow.

Tuesday was the day for obedience and rally, chaired by Pat Skavlen and judged by Linda Scanlon, with an obedience entry of 31. Rally was judged by Karen Lamb, with an entry of 44. Obedience High in Trial was Trahern Miracle Maddie RN JH, bred by Martina Friedeberg and Janet Parker and owned by Martina, Janet and Mary Grill. In Rally, High Triple Qualifier was GCH RACH Shine On Look on the Bright Side UDX, PCDX OM1 BN GN GO VER RM2 RAE3 TD MH13 MHA CGC, bred by Gina Hemphill and Ray Atkinson and owned by Debra Dove. High Combined was Ch. Courtwood Fire in the Sky CD BN RE MX MXJ MXF T2B ACT2CGC TKN, bred by Sue Hahnen, Dawn Darner and David Whitcomb and owned by Valerie Mahoney.

Directly following the end of obedience and rally, our Health Committee chair, Anne Marie Kubacz, had a treat for the attendees. Laurie Larson DVM (UW School of Veterinary Medicine) tackled the subject of canine vaccines, titer testing and nomographs. Technology and the world of animal science changes constantly. Offerings are many. The “big picture” of this discussion was the relationship between the breeder, the veterinarian and the families receiving pups. The discussion had many parts and a very good handout. I have re-read it myself several times now. People did not want to leave, and Dr. Larson answered every question. It was a great two hours.

Wednesday morning started with a favorite event … Puppy Sweepstakes! Sixty-six lovely pups paraded their pedigrees in front of breeder-judge Carolyn Dison. Every pup is up to the challenge of the phrase in our standard that calls for a “rollicking personality,” but this year’s collection of them seemed particularly lovely and well-behaved, too. Considering that many had travelled across the country to get there, and had, no doubt, limited access to free running, they behaved wonderfully. Best in Sweeps was awarded to Ashwood She’s Like the Wind, owned by Genea Jones and Laura Heidrich. 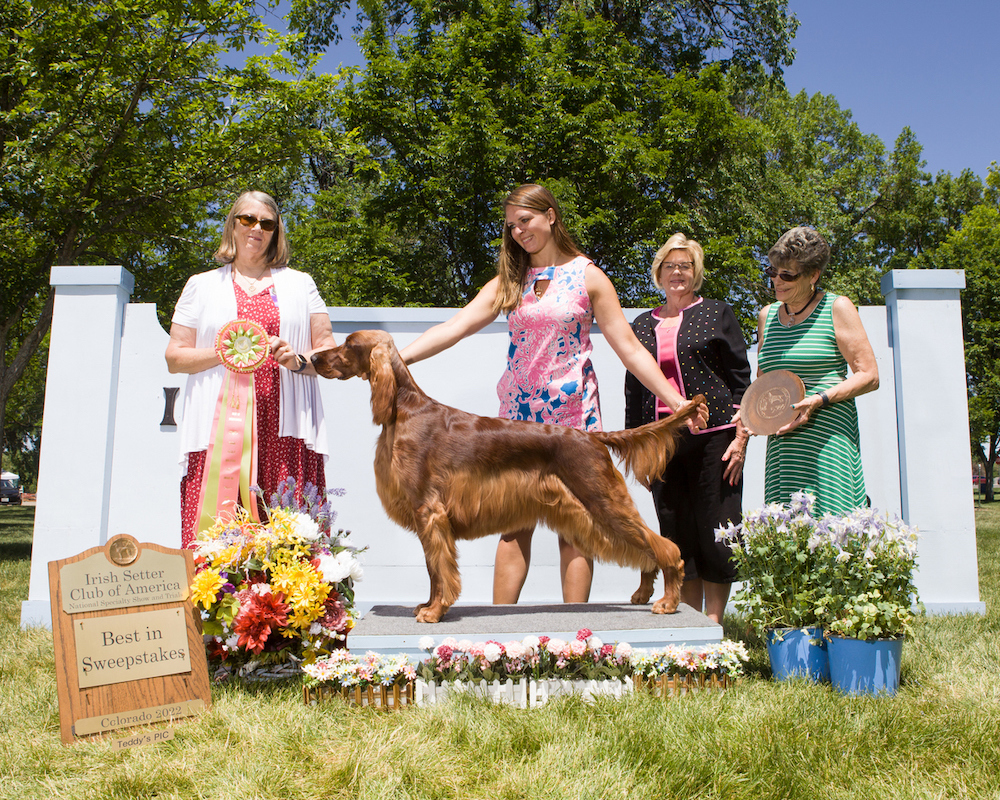 One hour after sweeps ended, the annual health clinic began, chaired by Anne Marie Kubacz.  The requirement was to be pre-registered, and I am told the pre-planning and organization by Jeanine Wilson were masterful. Such a gift to our breed to have our dogs tested at the National.    Good job, everyone.

Adding to the excitement of the day, Wednesday night was Veteran Sweeps and the Parade of Title Holders. Thirty-nine beautiful redheads, many silver faced, paraded proudly for breeder-judge Jeanette Holmes. In what I know must have been a difficult decision, based on the quality of these veterans, the Veteran Sweepstakes win was awarded to GCHP Set Fire to the Rain, handled by her breeder/owner Mary Merlo. 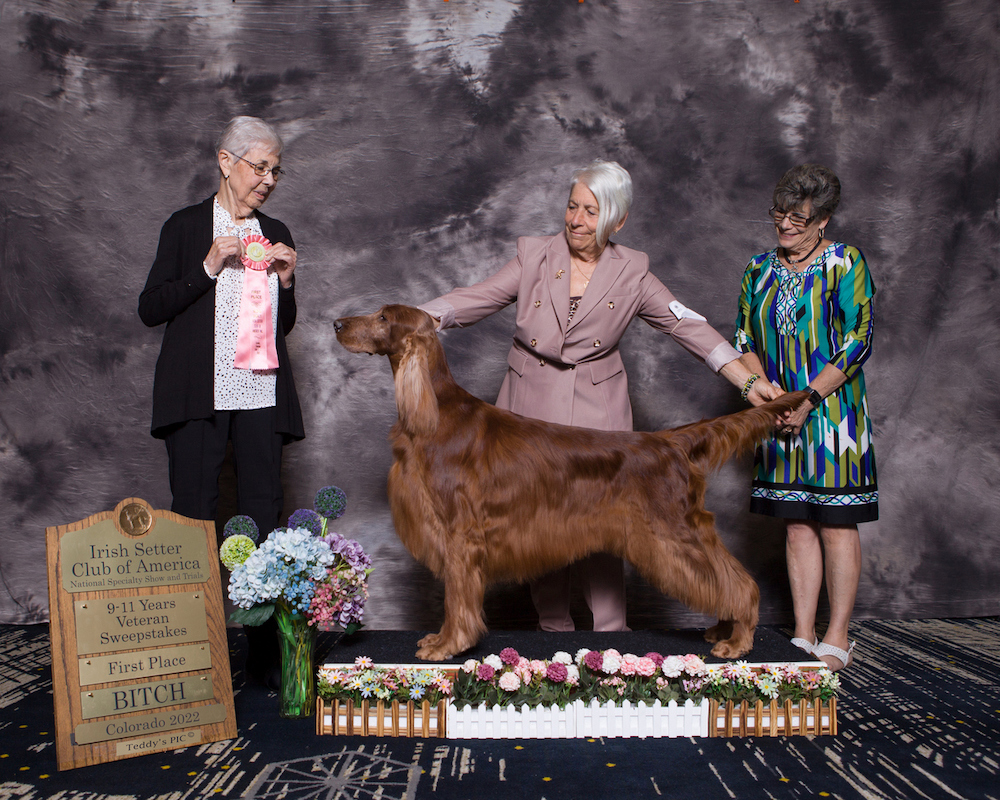 The ISCA Foundation opened their auction on Wednesday night, and the selections were wonderful. All funds raised at this Foundation auction go to health grants.

Thursday is always Dog Day, with all dogs judged by breeder-judge Lorraine Bisso. I was so happy to steward for Lorraine, and to have the “best view in the house” as she moved through the 78 dogs plus field, versatility and stud dog. In the end, standing at the head of the line was Kellyglen’s Pursuit of Happiness, bred and owned by Suzanne and Charles Walker. 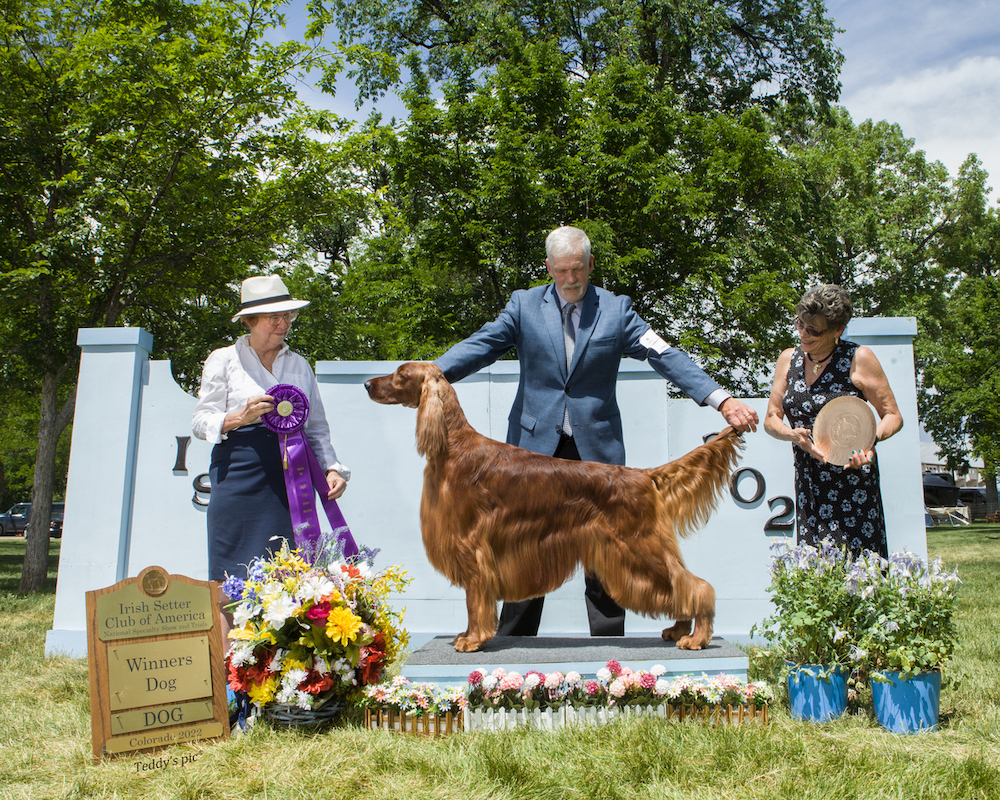 Thursday evening has a format that is evolving, and that is the combination of the Awards Night and the Top 20. A very nice gallery of attendees applauded the many winners of annual awards, and the trophies selected by Debbie Davis were terrific. This year the Top 20 had a different format, one that included pre-judging (to which all were invited), and a final presentation to the entire gallery, complete with individual music for each entry.

The judges — Bob Shreve, Ginny Swanson and Shaun Jordan — were tapping their toes to the music. The final nod for Top 20 winner went to GCHG Lunn’s Zippity Doo Dah, bred by Krista Musil and Garth Baker, and owned and handled by Krista. The People’s Choice award was a tie between GCHS Crimsonacre Come Running (bred by Ron Perry, owned by Ron, Laurie and Richard Green and Erline Jesseman, and handled by Peter Kubacz) and GCHC Jadestar N Cairncross Wild Wild West (bred by Kathleen Crocker and Janet Smith, owned by Kathleen and handled by Carlos Carrizo).

Apart from the competition, the evening also revealed two additional awards! It certainly seemed fitting that this happened on Thursday evening in front of such a nice audience. The E.I. Eldredge award – its description designates it as awarded to “the person who best exemplifies those attributes most closely associated with Ted Eldredge: good sportsmanship, compassion, kindliness, integrity, courtesy and devotion to the welfare of the breed” – was presented to long-time member, breeder and former ISCA President Robert (Bob) Robinson. It was a very special moment.

This evening also saw the awarding of the AKC Outstanding Sportsmanship Award, which is described as an award to recognize and celebrate volunteer club members. This year’s winner is Mariette O’Malley. A long-time owner of Irish, Mariette has had many roles, including president of the Eastern Irish Setter Association (EISA), but is probably best known to everyone as the “hostess with the mostest.” She has been a part of guaranteeing the success at multiple nationals around the country.

Friday you could feel the heat escalating for bitches, as the day started with 97 class bitches and about a 97-degree temperature. Judge Anne Bolus judged with the comfort and safety of dogs and exhibitors always in mind. I was delighted to steward for Anne and have such a great view of the “girls.” A highly competitive winning line-up, but standing proudly alone at the end was MiJeans Whiskey Tango Foxtrot, bred by Mary C. and Jamie Lamphier, and owned by Sarah Shuman, Jean Johnson and Jennifer and Joanne Holmberg. She was handled by Jennifer Holmberg Baggenstos. She also went on to Best of Winners. 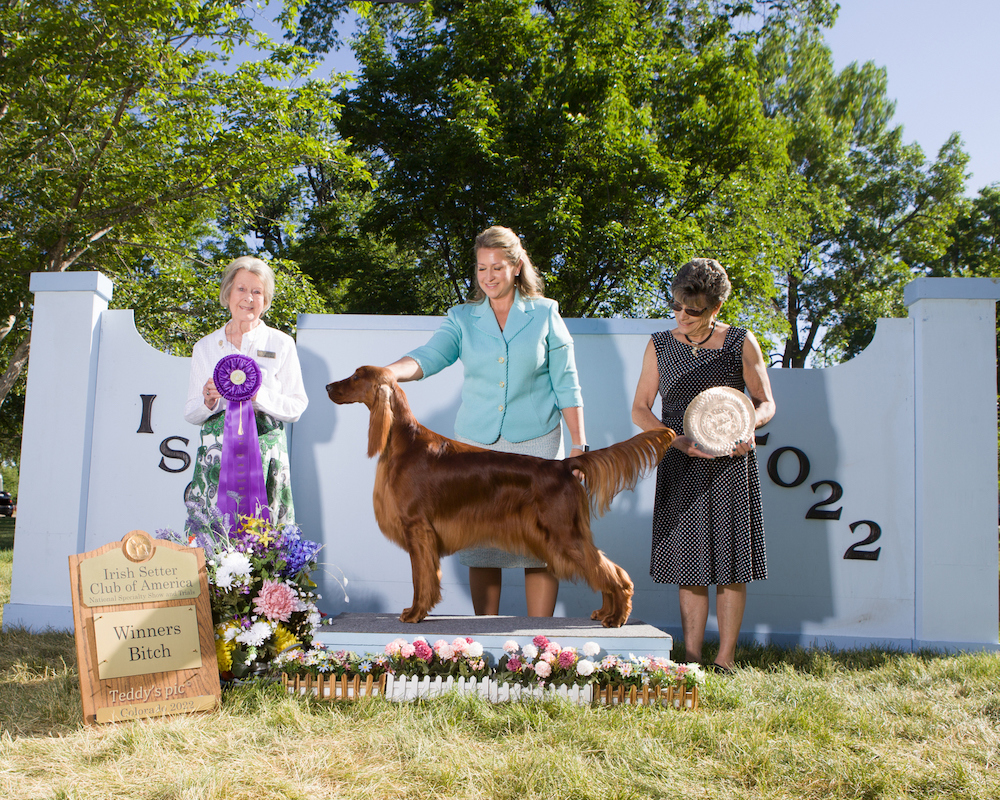 Immediately following Winners Bitch, the eye clinic took over, again organized by Anne Marie Kubacz, enhancing our commitment to health in our Irish.

The Irish Setter Club of Colorado hosted an evening event, organized by Kim Lamontagne, and with some of the best food we had all week, just gorgeous meats and all accompanied by a deejay AND a dance teacher to remind us what it was like in the 1970s. Such a great evening. Ken Davis had designed the table centerpieces, which I can only explain as a great vision of the human animal bond! I love mine! Tomorrow was a big day, so most of us turned in early.

Saturday, and the order of the day was Juniors, Pee Wee and more than 107 in the breed ring for Best of Breed. There were three classes of Juniors, and Best Junior was awarded to Haley Coker, handling Ch. Daventry n Rusticwood’s Chasing’ A Wish CGC. The dog is bred by Carolyn Dison and Capt. Catheryne Houston and owned by Catheryne and Tom Houston and Jordan and Haley Coker.

Excessive heat was promised, and it did come. Somewhere about 99 degrees, but coolers were everywhere for dogs and humans, and hats were the order of the day. Under the ring tent was an entire line of “misters,” and, trust me, people were standing under them

Anne Bolus judged in pre-selected lots of 10. Smoothly, one lot went out, cuts were noted, and the next lot came in. A 30-minute break was taken and Anne returned to make a “cut from her cuts.” Suddenly, standing there were BOB, BOW, BOS, Select Dog and Bitch and 10 Awards of Merit. And that’s how you get from 472 entries, of which about 107 were in the breed ring, to ONE! 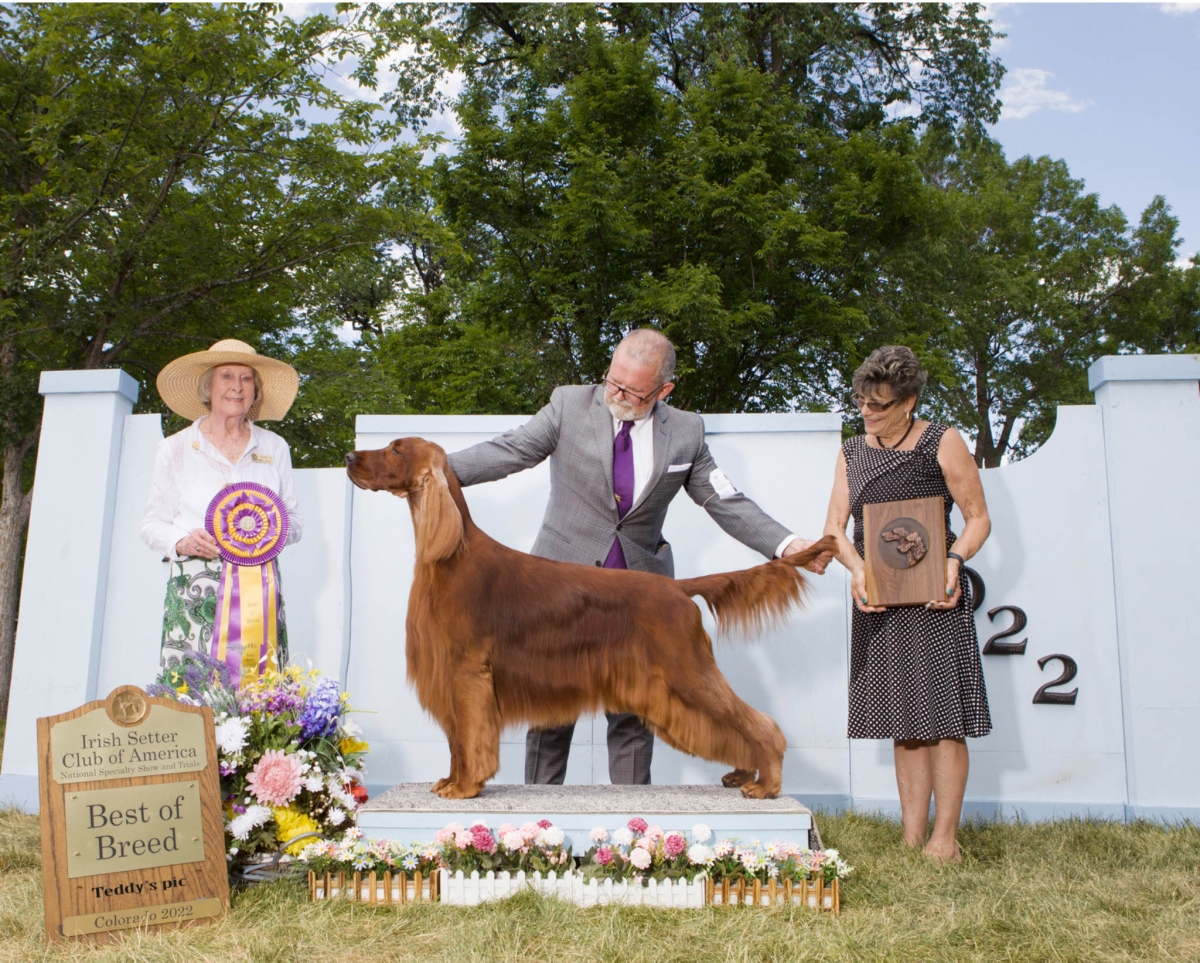 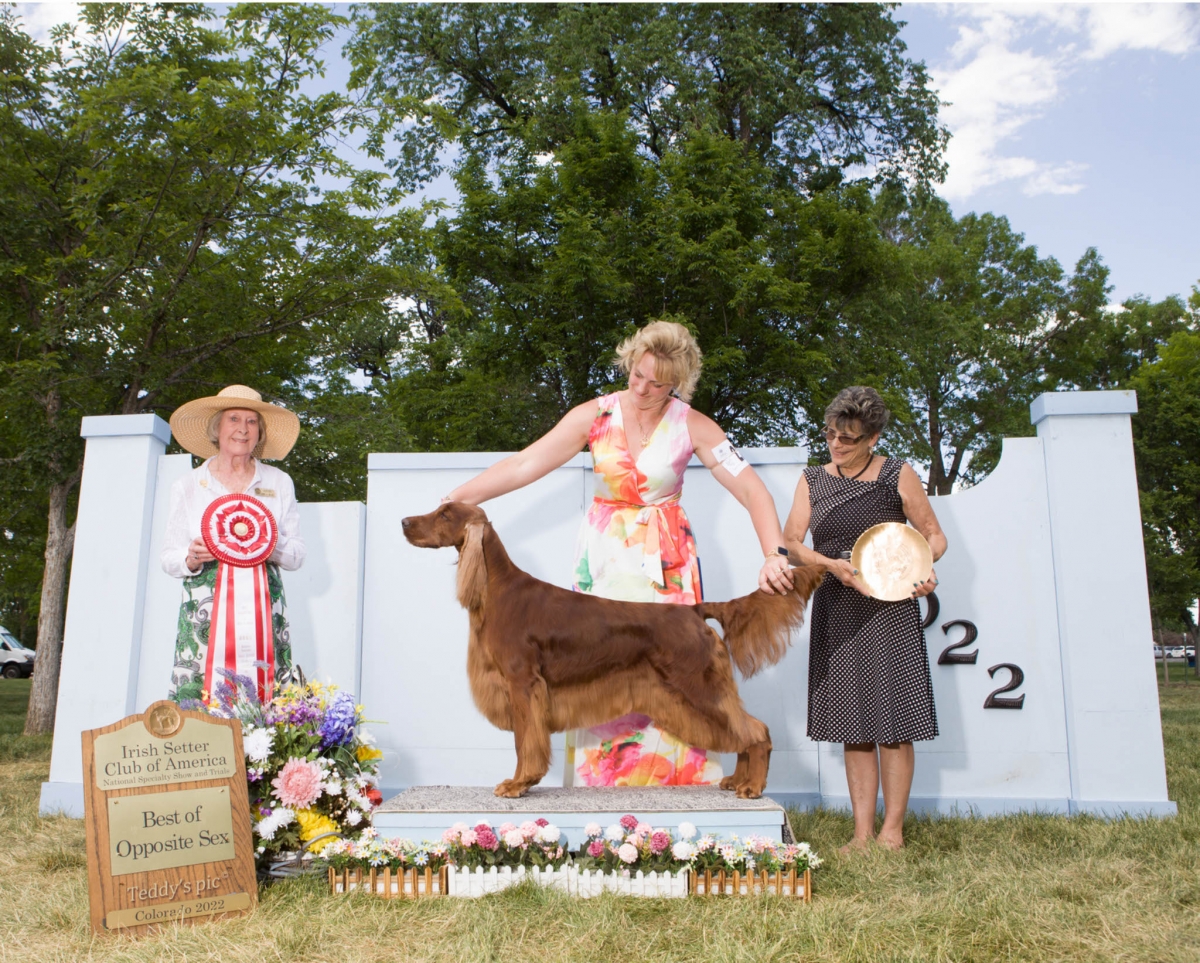 Best Brace closed the National (and, boy, were they nicely mannered): GCH Sweetwood’s Reason to Believe was coupled with GCH Sweetwood’s Miss American PI. The brace was handled by Kim Kazee.

With that, the National was over. The Island Park Grove site is just wonderful, the ring very spacious, we were lucky to have member Kelli Aiken leading the grounds control, because storms did roll in and she was on her ATV advising of weather and lowering your tents every day. With good options for motorhomes, and multiple buildings to hold special events, I would suggest this site to anyone. Our host hotel, the Double Tree, was six minutes from the site. Very dog friendly, including dogs allowed on the outdoor patio where they served meals. Many attendees had trailers dropped on site, and many had both trailers and hotel rooms. The Greeley Kennel Club was a great partner in our success.

To members of the Colorado club and the 2022 show committees, sincere thanks for a great time, and congrats on the 2022 National.

Indeed, the Third Time’s a Charm!

© Dog News. This article may not be reposted, reprinted, rewritten, excerpted or otherwise duplicated in any medium without the express written permission of the publisher.
Fri, 08/05/2022 - 10:33pm