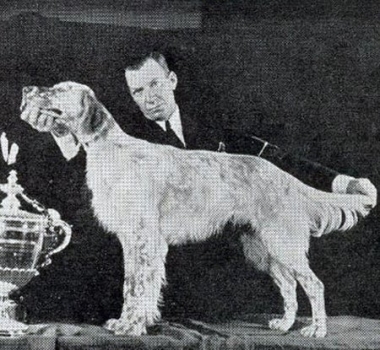 English Setter Ch. Daro of Maridor, who went Best in Show at Westminster in 1938, before he had even turned a year old.

How much have our breeds really morphed over the last century?
By
Carlotta Cooper

The days following the Westminster Kennel Club show are always a good time to ponder the sport of purebred dogs. It’s one of the best occasions of the year for people in the dog fancy, as well as the general public, to see some of the finest dogs of all breeds. It’s not unusual to hear calls throughout the year that various breeds have changed, over time, from their original appearance. Looking at breeds at Westminster, especially during breed judging and at the specialties surrounding the big event, can be a good way to assess how much truth there is to the thought that breeds have changed – and whether the changes are merely cosmetic or if they are structural. And, if there have been changes, are they for better or worse?

If you’re really interested in this subject, you probably won’t find the answers you are looking for just by comparing pictures of dogs from the Westminster Kennel Club to images of dogs from 100 years ago, especially if you’re considering a coated breed. Coats and grooming styles have changed dramatically in the last century. I doubt anyone had a blow dryer 100 years ago, but it’s considered nearly indispensable for grooming many coated breeds today. The dogs beneath the coiffures may or may not have physically changed, but it’s unfair to judge them based solely on their hairstyles. If you doubt that this is true, consider men’s hairstyles today. Men are essentially the same today as they were 100 years ago, yet men in 1920 were not wearing their hair in buns.

For my breed, English Setters, our esteemed breed historian, Carl Sillman, posts a weekly photo of a dog from the past. He provides some historical information about the dogs, breeders and kennels. Of course, in the days leading up to Westminster this year, Carl posted a photo of Ch. Daro of Maridor, the Westminster BIS winner from 1938. Daro of Maridor is distinguished by being a mere 11 months of age when he went Best In Show at Westminster. (He’s also the only English Setter to have won Best In Show at Westminster – a terrible oversight.) He won from the classes that day in his first show, a feat that may never be duplicated.

The photo Carl shared was taken a few days later, when Daro was displayed to the press. It was not the most flattering picture of this great dog, and perhaps dogs were posed by their handlers differently in those days. A friend with hunting English Setters asked a great question regarding the picture, commenting that Daro looked like a Ryman Setter and wondering what or who determines how the breed should look in the ring and why. 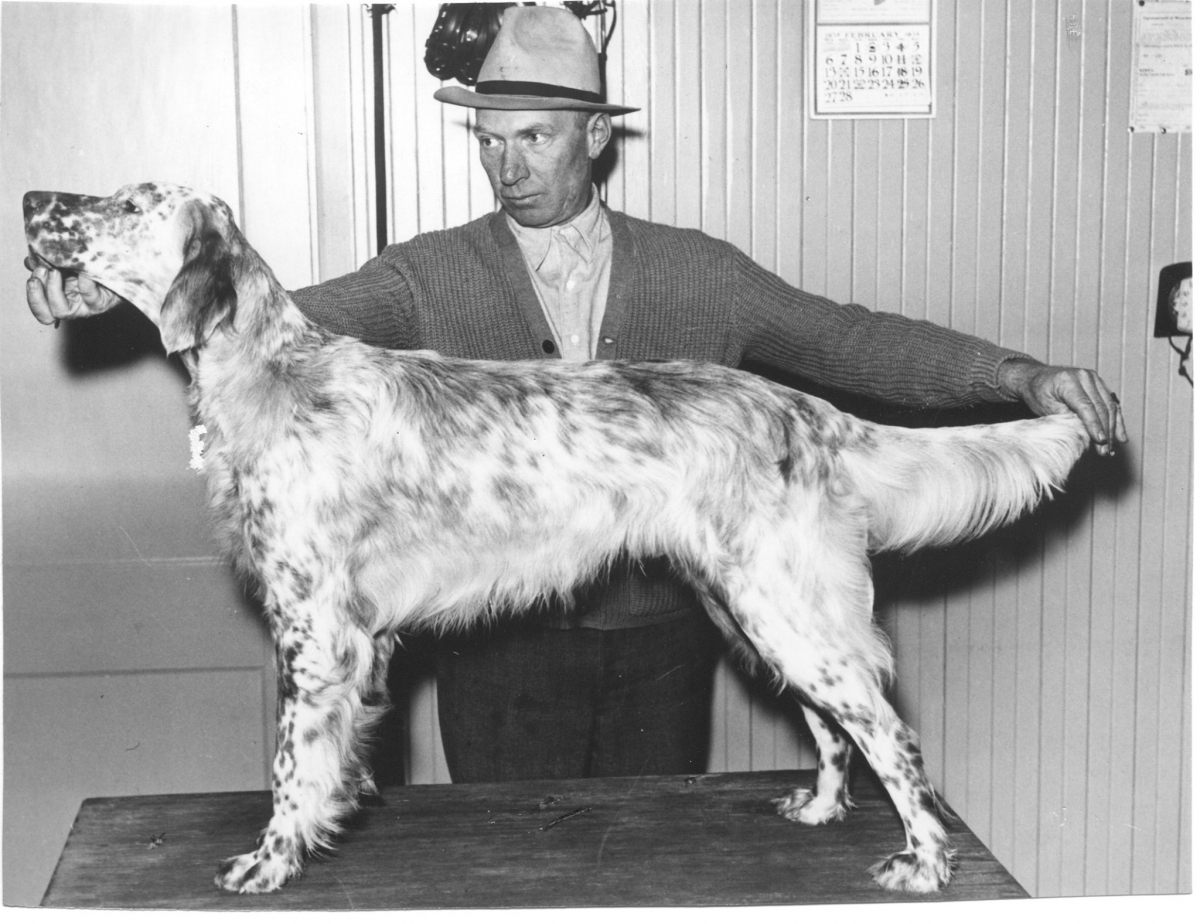 This photo of Daro of Maridor and handler Charles Palmer was taken at the Maridor kennels a week after his big 1938 Westminster win, which was such an upset that the press was still hounding him for publicity.

Of course, the breed standard for English Setters has changed very little since that time. I think a better photo of Daro of Maridor would show that he was not so different from our dogs of today. Stacked squarely, with a little more coat, groomed a little differently, and he would look very similar to the dogs being shown today.

There are some breeds that have had structural changes in the last 100 years, sometimes for good reasons. Some old breeds have been reconstructed or recreated in recent years following years of decline. We often forget that World War I and to an even greater extent World War II were devastating to many breed populations in Europe and Japan. Some breed populations were all but wiped out. Other countries experienced revolutions in the 20th century that made it nearly impossible to salvage some dog breeds – yet a few managed to survive. Under these conditions, breeders have had to work with the surviving dogs to try to save various breeds. Many breeds are still works in progress.

For preservationist breeders, dedicated to honoring and celebrating the heritage of their breeds, I would never argue that they should seek to change their dogs on a whim or for the sake of winning in the show ring. But there can be times when decisions about the health of a breed require subtle changes in appearances. Consider the Field Spaniel, which was largely redesigned in the 20th Century, quite intentionally, to improve its physical structure and health. 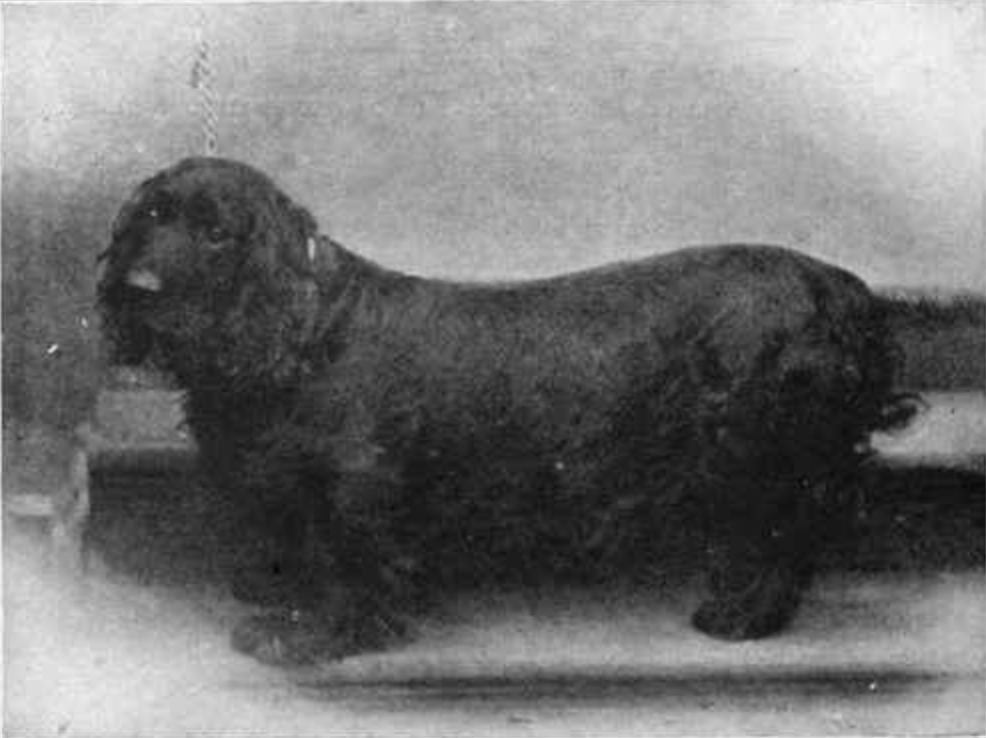 Of course, some people will claim that breeds have undergone physical changes because breeders are breeding extremes in the quest for show-ring ribbons. I think dog breeders, in general, try to breed what they consider to be beautiful dogs, according to their breed. What looks extreme to one person can look normal and within the standard to another person. No one sets out to breed an ugly dog or a dog with health problems (with the obvious exception of breeders who are participating in health trials). The nice thing about dog shows, parent clubs, breed standards and judges is that they exercise some moderation when it comes to breeders who are not good at noticing when they have bred dogs that have veered toward extremes. As long as others keep their heads and continue to breed according to the standard, the occasional breeder who breeds extreme dogs should not have a long term detrimental effect on a breed.

Dog breeders today face different challenges than breeders did in 1920. In some ways, we know more about health and genetics than our predecessors did. In other ways, we have probably lost knowledge about the every-day jobs that many dogs once performed as a matter of course. We will never get to see some of our breeds as they existed before they became popular as pets and show dogs. We won’t see Setters in the field as they were in the 1870s or Yorkshire Terriers working as ratters in textile mills. We probably won’t see Rottweilers pulling a butcher’s cart. We’ll never know what many breeds were like when they were first being developed or their breed standards were first being written. We can only guess, based on original writings, artwork and the dogs that have come down to us, trying to piece together a vision of what the breed is supposed to be. It’s up to all of us to try to fill in as much information as we can and know our breeds as thoroughly as possible so we can preserve these traits.

Today breeders strive to breed dogs that can still fulfill their original purpose while also producing dogs that are able to be good pets. In 1920 there may have been more emphasis placed on the dog doing his job. Today a dog must first and foremost be a good pet. If a dog isn’t a good pet with a good temperament, able to be part of a family, there’s little likelihood that there will be much demand for his or her progeny, whether puppies go to show homes or not. Few people today can afford to keep a kennel full of dogs that aren’t someone’s special pets when they aren’t going to dog shows. And most people – even the most ardent dog show fanciers – won’t keep a pet with a bad temperament.

As far as physical changes in dogs, today’s grooming may be a little different, the handling and stacking could be different, and even the structure of a few breeds may have changed. What has not changed is that dogs are still our best friends.

Before closing, I would be remiss if I didn’t say what a pleasure it was to watch the Westminster Kennel Club broadcasts on FS1 and FS2 this year. Fox Sports took some heat from fanciers when they first began airing the Westminster show, but their television coverage was exceptionally good this year. The camera work, including days of breed judging, was good quality and smartly focused on the dogs. The hosts during breed judging were interesting and entertaining. They and Westminster were unfailingly pro-purebred dog without being in anyway negative about other dogs. And I’m probably not the only one who shed a tear a few times during the show while watching one of the special segments. Kudos to Fox Sports and thanks for supporting our sport.

© Dog News. This article may not be reposted, reprinted, rewritten, excerpted or otherwise duplicated in any medium without the express written permission of the publisher.
Tue, 03/10/2020 - 2:31pm