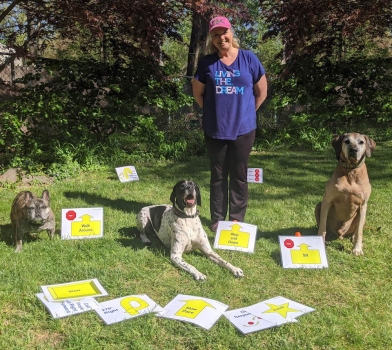 Competing in Your Own Backyard

Breeders and trainers began spreading the word to owners about how they could have fun with their dogs and earn titles along the way. The program even helped some furloughed trainers earn money by evaluating trick videos. Given that success – not to mention that dogs shows and events have ceased indefinitely – it’s not surprising that the AKC moved quickly on new ways to engage the dog community … and make a few bucks along the way.

April brought the debut of the Rally Novice Virtual Pilot Program, which allows owners to complete the 12- to 15-step course, qualify and title from their own home. Entrants download one of the five course options, print out Rally signs, set up the course, video their performance, upload the video to YouTube, make a $28 payment, submit an online form, and wait for their video performance to be scored by an AKC Rally judge. Whew, say that three times fast!

With word spreading quickly on social media, it did not take long for owners to start posting stellar performances and epic fails alike. Some set up private Zoom sessions to train and compete for the first virtual title within their group. Many congregated on Facebook groups and club pages to share training tips, ask questions and just stay connected. There was even a Rally group that posted an announcement from a training facility that was willing to set up indoor courses and video the runs –while practicing social distancing, of course.

What could anyone possibly complain about?

As with anything on social media, the naysayers came out swinging. “It’s not fair, I earned my title the hard way,” said one. “Anyone can title from their backyard,” commented another. “It is not the same as a real trial environment.” One person pointed out that at a real trial, you can’t pre-run the course with your dog, while those at home have the very real advantage of practicing as many times as they want before submitting a video. 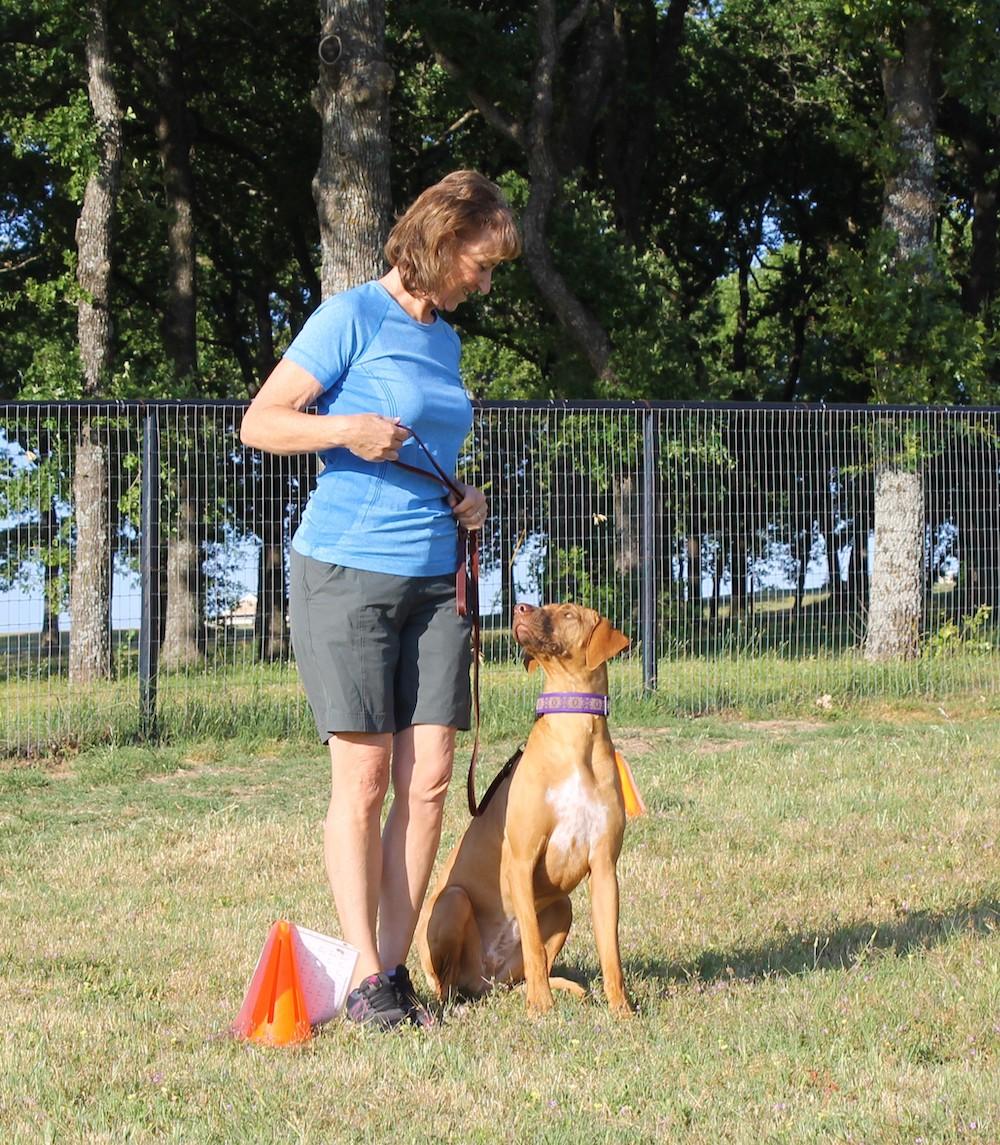 Becky Nelson of Weatherford, Texas (pictured here getting her 10-month-old Ridgeback, Hallie, ready for her first Rally video), disagrees about that home-turf advantage, noting that competing in your own backyard comes with its own set of challenges.

"I have a girl in season who roams the yard throughout the day, which is a definite distraction for my young male,” she laughs. Her husband, who would normally stay outside when attending a trial with a young dog, is her cameraman, and oftentimes her young puppy is tempted to go visit with him. Cars driving by, kids playing, dogs barking, birds and squirrels appearing … the list of distractions goes on and on.

While Nelson has titled multiple dogs in Rally the traditional way at the Novice, Intermediate, Advanced and Excellent levels, she finds the same level of reward with her virtual performances. “I find myself getting every bit as excited and proud to receive my emailed Qs for the videos submitted as if I were seeing the scores posted outside the regular trial ring,” she admits, pointing out that the video submissions are only available for Novice titles, which do not count toward rankings. “It’s only going to keep us engaged with our dogs."

Click below to see one of the qualifying videos that Beckly Nelson sent in to earn a Rally Novice leg on her 10-month-old Ridgeback, Maverick.

This temporary program isn't just a creative way to get owners to do things with their dogs, but also allows the dogs to have an outlet, use their minds and further the human-canine bonding experience. I admit that without this program the engagement level with my own three dogs would be different. I have never earned a Rally title before, but did have one qualifying leg on two of my dogs. By doing this at home, I quickly learned that my three dogs were at different places on the learning curve: The 10-year-old Rhodesian Ridgeback thinks he’s far too dignified to perform some of these silly tasks, the 7-year-old Pointer makes the Energizer Bunny look like a sloth, and the 7-year-old French Bulldog is more like a donkey in training.

Whenever the weather is nice, I go outside and do a little training with each dog. I have now submitted final Novice videos for both the Ridgeback and the Pointer. The Frenchie? Well, let’s just say that’s a work in progress.

As for the downsides of home verses a real trial environment, I can argue there is an even bigger one. In January, I took my inexperienced Ridgeback and Pointer to an indoor trial. When the Ridgeback humiliated me by refusing to sit and sniffing the entire way around the course, the judge and exhibitors alike gave me pep talks. When I took a different tack with the Pointer by using an extremely happy voice, causing him to become overly animated, both the judge and exhibitors were smiling, laughing and clapping for us. When the scores were posted and he earned his first qualifying — albeit low — score, everyone celebrated with us. The judge even made a point of saying that he was most enjoyable dog to watch that day.

At home, however, you turn off the camera, pick up the signs, and it’s over. No clapping, no cheering, no community to celebrate with you. A bit anticlimactic, so maybe those complaining about the unfairness of it all can think about the other side. 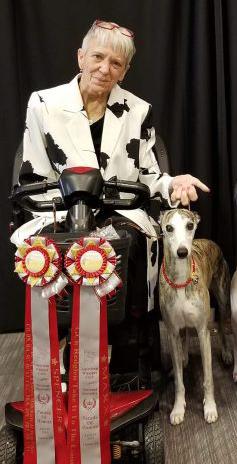 AKC judge Denise Tatro of Crowley, Texas (pictured), has been an Obedience instructor for more than 40 years and taught Rally since before it was AKC sanctioned. A Rally judge since 2008, she believes there is a real upside to the virtual program.

“It has inspired new folks to try it and maybe set the hook once they realize how fun Rally is for the dog and handler,” she says, adding that this format can benefit many types of dogs, including rescues that might not be good around other dogs. “Doing this at home gives the owner the joy of putting a Rally Novice title on a dog that could not otherwise compete.”

Tatro doesn’t agree that Virtual Rally Novice title takes away from those who earned their titles in the traditional trial setting. And while she thinks these remote exercises are “great for now,” she doesn’t see them continuing after the shut-down period ends, as she believes people will be ready to “get back to trials.” She does, however, think that the AKC might consider keeping the virtual Rally Novice program for those who would like to obtain the title but for various reasons have no wish to compete.

Based on the sheer number of social-media posts and videos, Tatro may be on to something: Their Rallying cry might have the AKC thinking outside the box more and more.

© Dog News. This article may not be reposted, reprinted, rewritten, excerpted or otherwise duplicated in any medium without the express written permission of the publisher.
Mon, 05/11/2020 - 8:00pm