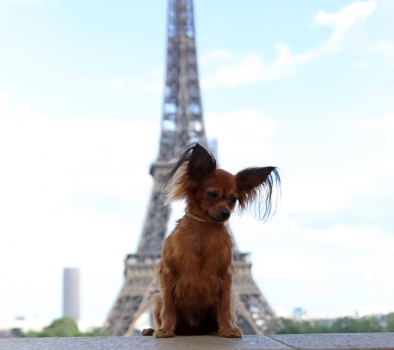 The European Dog Show in Paris
By
Yossi Guy

The European Dog Show, which took place in Paris in April, was a large and busy affair. The French Kennel Club actually organized two side-by-side shows on three days, making it extremely busy and lengthy. The European show was held in the morning, with the main ring beginning at 1 p.m., while the French Championship began at around that hour and continued until the evening. Even though the breeds did not compete twice on a particular day, it was definitely a busy show.

The event was held at one of the large expo halls in Paris. All rings were quite spacious and covered with carpets. There was enough room for exhibitors to stay near their ring and apply the final grooming touches to their dogs. The organizers printed separate catalogs for each of the groups, making them easy to hold and carry.

Even the weather was lovely, and Paris is always a great place to visit, particularly in springtime, when all open areas are filled with flowers.

"It's a very nice show – good organization, very nice judges and very high-quality dogs," said judge Ana Mesto of Spain, who judged Long-Haired Dachshunds, Miniature Schnauzers and several mastiff-type breeds, including the Fila Brasileiro and Presa Canario. “There are a lot of breeds, but the entries are relatively small in most of them. However, there are breeds with quite large entries requiring two judges, such as the Golden Retriever.”

At most FCI shows, dogs receive a judge's critique noting their good and bad points. This, of course, takes time, and in order to speed things along, the judges at the European show only gave the dogs qualifications and placed them.

"I prefer not to work with critiques because it delays the judging," Mesto said. "However, I'm aware that exhibitors like critiques." 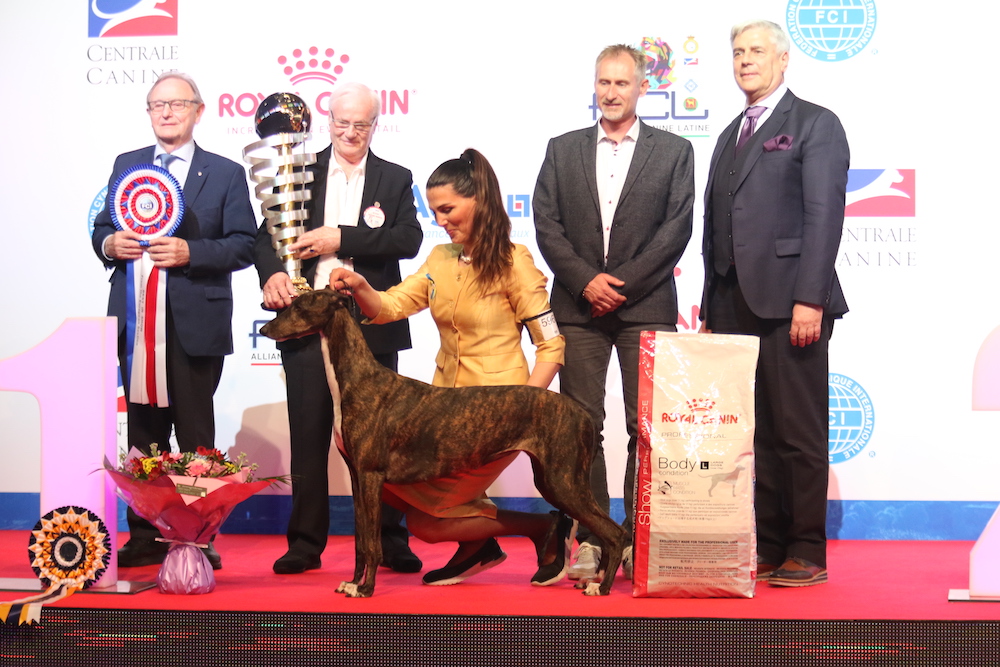 Best in Show at the European show was judged by French all-rounder Jacques Médard Mangin, who chose the Greyhound from Germany that had won the Hound Group at Crufts. Ina’s Fashion Desirable, or "Aya,” carries a UK title, among others, and is owned and bred by Ina Koulermou from Germany. This was the first-ever Greyhound to win Best in Show at the European Dog Show, and earlier this year she was the fourth Greyhound to win the Hound Group at Crufts. 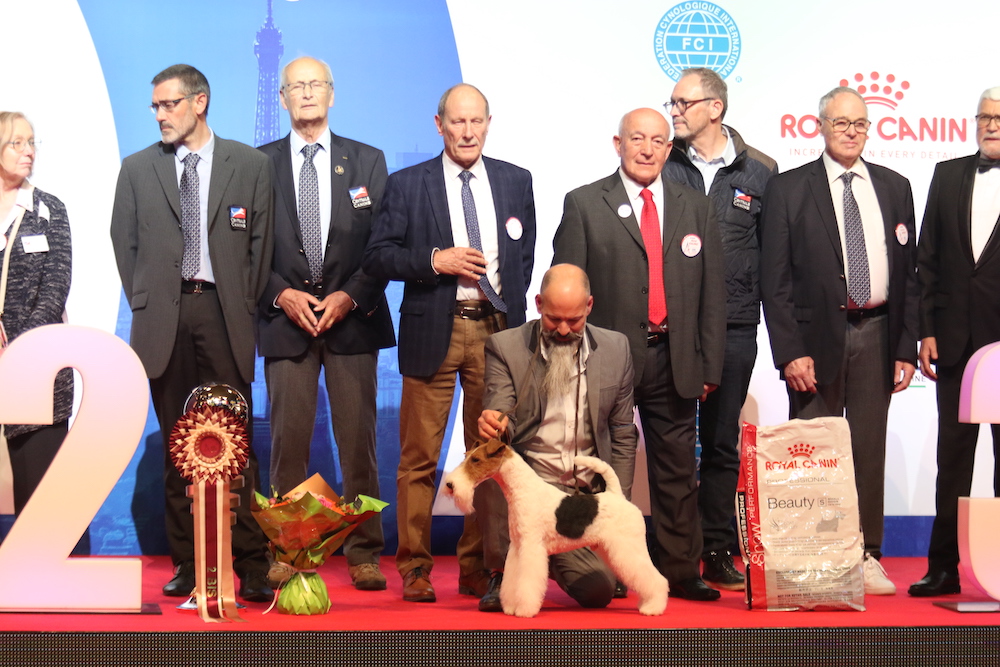 Reserve was the Wire Fox Terrier Funfair Foxhouse, with Davide Valli from Italy. 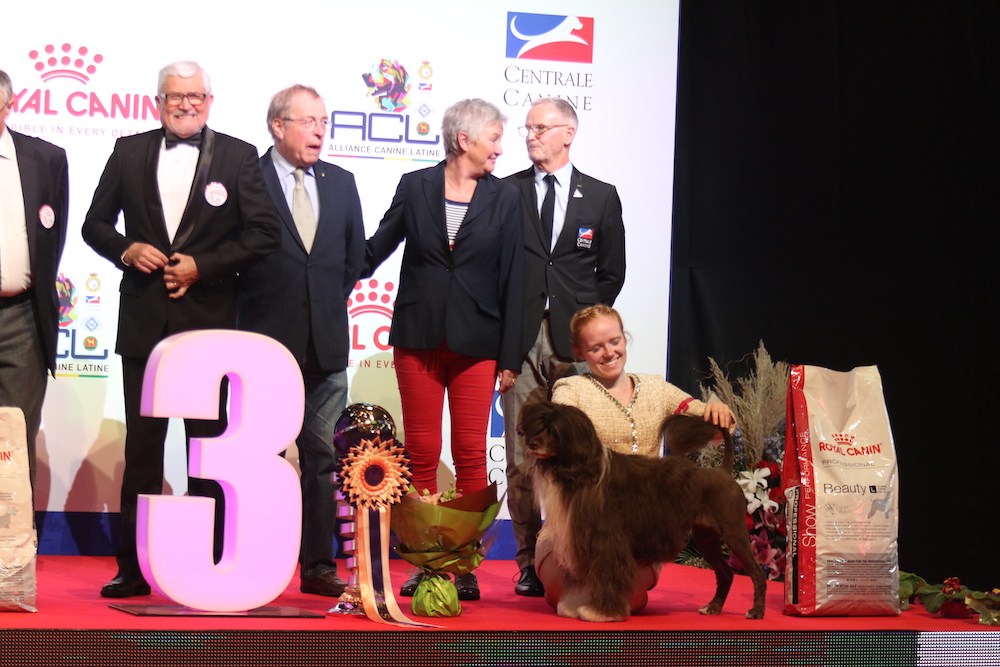 In third place was the veteran Portuguese Water Dog Casa Hoya’s Shoot for The Moon, owned by Ilona Griffioen-Van Beek from the Netherlands.

"I look in the eyes and I ask her… if not you, then who?" Koulermou wrote. "She definitely knows! Regally, she shakes her tail, I can see the spark in her eye, and off she goes around the big ring, showing everyone that she deserves this!"

In addition to the European Show, Aya won the group at the French Championship that took place simultaneously – definitely a great achievement.

Breeder Davide Valli of Funfair Foxhouse shared his experience. "In the dog-show world, everyone thinks that his dog is the best. But when everybody thinks that your dog is the best, that's something different. I would like to say thank you to the breed judge, Jorge Nallem, without whom my dream could not have started. Then the group judge, Jean-Louis Escoffier, who made me dream, and last but not least, BIS judge Jacques Medard Mangin, who made me wake up with the trophy in my hands.”

Ilona Griffioen, breeder and owner of the Portuguese Water Dog that took a BIS 3, bought her first Portie in 1997, when she was 14 years old. Her Casa Hoya's Shoot for The Moon caught her eye the moment she was born.

"I was going to place my pick puppy girl with friends, but ended up keeping two girls from that litter since Leena insisted on staying with us,” she said of her 8-year-old Dutch, Belgian, Luxembourg, Benelux and International champion. “She has always had a mind of her own, which is what we love about her, and she is a true princess.”

In 2016, Leena’s young handler, Priscilla van Oosten, approached Griffioen to ask if she had a dog suitable for junior handling. Griffioen said yes, on the condition that the dog stay with van Oosten for a week to see if there was a connection.

“This is something that's very important to me, and our breed isn't ‘easy,’” Griffioen said, adding that Leena is “definitely a pro” at training people, like wiggling on the stack in a bid to get more bait. “They know what they want and will try to fool you.”

A few days after Leena arrived, van Oosten called Griffioen to say she wasn’t sure this would work out, as Leena was being difficult during their training sessions. “My response was, ‘One day you'll have her right where you want her.’”

And that is just what happened. With Leena at the end of her lead, van Oosten was Dutch champion junior handler in 2016, and at the World Dog Show in 2017 and 2018.

As Leena approached her eighth birthday, van Oosten began conditioning her to be shown as a veteran. Their first weekend out, three days after her birthday, Leena won Best Veteran in Show at the Antwerp show. She got her first veteran championship title in Luxembourg the following week and then again in Paris.

"And, yes, dreams do come true,” Griffioen concluded. “Leena won Best of Breed out of the veteran class with 23 PWDs entered from all over Europe. Beyond that, I was amazed that she was placed first in the group and then third Best in Show. Speechless!”

Cecilia Benjaminson from Sweden – a self-described “crazy dog lady” – loves all dogs, but for the past two decades, her heart has belonged to the American Staffordshire Terrier.

"We have never been to France before, but I really enjoyed the trip!” she said. “At this year's European show, my co-owned dog ended up BOB among 92 entries, and I cannot be prouder. We also went first in the breeders' groups and puppies at the French Championship. But the bottom line is the trip itself, friends, meeting other breeders – that is the most important thing.”

Agnes Katharina Biglarnia from Sweden breeds Dalmatians and owns the dog that came second in the group, Running Spot's Dancing Bob. “Bob” was born in Norway, son of a male bred by Biglarnia.

"From the first weeks of his life, I saw big potential in this boy, and I decided to keep him,” she says. At the age of four months, Bob started his show training with his handler, Valeriya Chernova in Russia. “He was very successful in baby, puppy and junior classes and was BIS junior several times,” Biglarnia continued. Bob’s first big win was in Helsinki, when at the age of 11 months he became Best of Breed and Best in Group. At the 2022 EDS in Paris, he became European Winner, Best of Breed and reserve Best in Group with his handler Katja Rauhut. Those big wins aside, “the most important thing is that he loves shows and behaved like a star in the ring."

Siv-Hilde Oware of Norway (mother of the Crufts BIS winner) arrived with two junior handlers. Despite some confusion regarding the junior handling before the Paris show, she says it all turned out to be a positive experience.

"The language barrier is always a hinderance in France, and not always easy to manage for the younger ones,” Oware explained. “The judges all days were doing a great job and acting openly and friendly toward the children. It was really nice to see the good interaction between the junior handlers outside the ring. New friendships were established and there was a positive vibe in the air.”

The icing on our cake was that the overall winner was Malin Landmark from her home country of Norway.

Other group winners were: 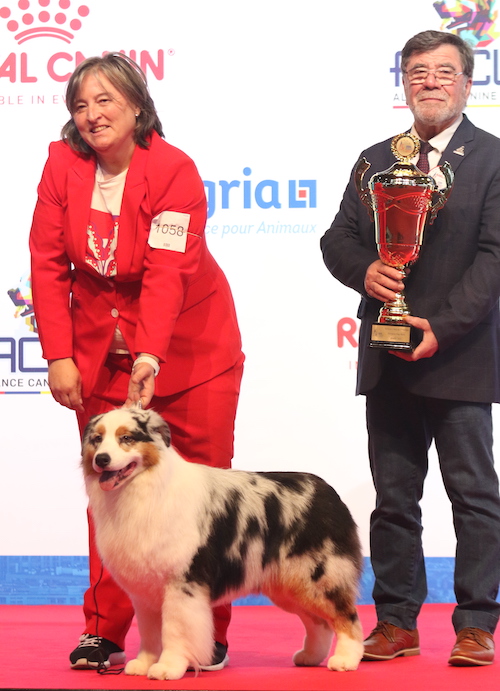 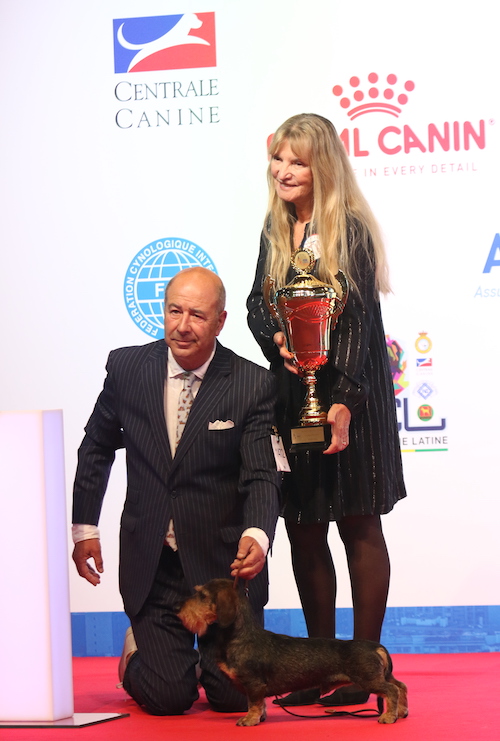 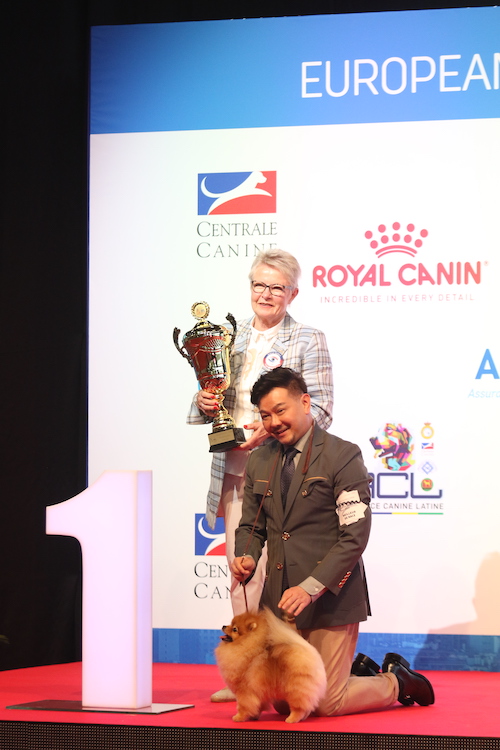 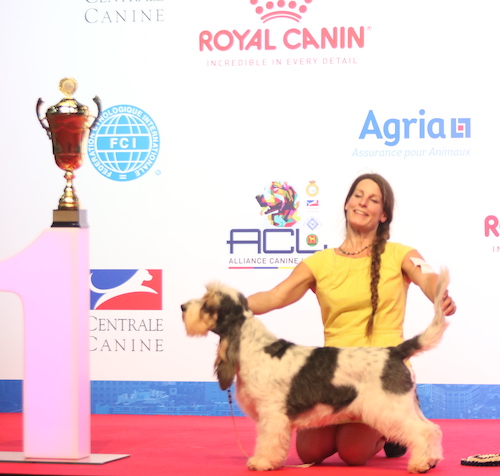 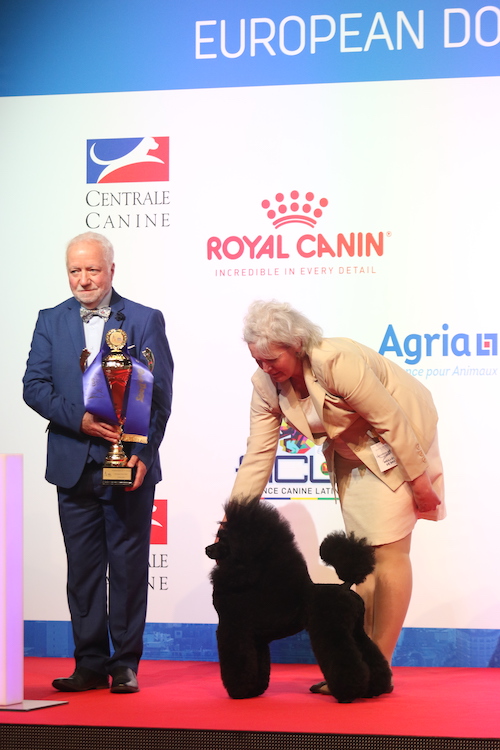 The BIS at the French Championship had been judged the previous day by another Frenchman, Roger Barenne.

His winner was the Tibetan Mastiff from France, Rongshai du Domaine de Toundra, owned by Sanra Haeffele and handled by Cedric Jegou.

The Greyhound and GBGV mentioned earlier were among the group winners, along with:

© Dog News. This article may not be reposted, reprinted, rewritten, excerpted or otherwise duplicated in any medium without the express written permission of the publisher.
Fri, 05/06/2022 - 10:08pm