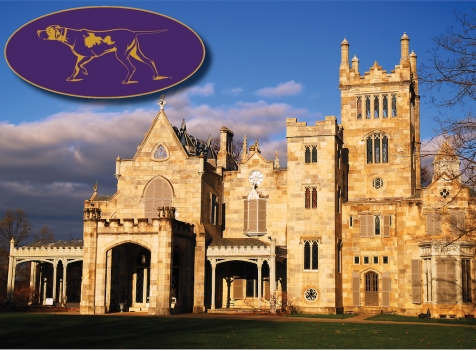 New York, NY – The 145th Annual Westminster Kennel Club Dog Show will be held at Lyndhurst, a property of the National Trust for Historic Preservation, in Tarrytown, New York on Saturday, June 12 and Sunday, June 13, 2021, with live coverage across FOX Sports networks. Due to the ever-changing government restrictions during the pandemic a move to a springtime, outdoor dog show was necessary to uphold Westminster’s strong commitment to the health and safety of everyone who attends our show.

Gould’s youngest son, Frank Jay Gould, was an avid owner, breeder, and exhibitor of rough- and smooth-coated St. Bernards at Westminster in the late 19th and early 20th centuries. The family offered many trophies to St. Bernard winners including the silver Gould Challenge Cup.

Lyndhurst is no stranger to dog shows having hosted them for more than three decades. In 1983, the legendary New York Times dog show reporter Walter Fletcher called Lyndhurst, “one of the most beautiful show sites in the country.”

Three newly AKC-recognized breeds will join the 208 eligible breeds at the Westminster Kennel Club Dog Show in 2021. The archetype water dog of France, the Barbet is a joyful, bright, and loyal companion. A rustic breed with roots as far back at the 16th century, this medium-sized dog locates, flushes, and retrieves birds. The Barbet will join the Sporting Group.

The rarest of the four native Belgium breeds, the Belgian Laekenois (pronounced "Lak-in-wah") is an affectionate, alert and intelligent dog bred to herd and guard flocks and fields. Similar to the Malinois, Shepherd and Tervuren, this sturdy dog’s main difference, besides region of origin, is his rough, coarse coat with a tousled look. The Belgian Laekenois joins the Herding Group.

The Dogo Argentino, developed in Argentina’s Cordoba province in the 1920s, was bred to find, chase, and catch dangerous game such as wild boar, pumas, and other destructive predators. The Dogo Argentino joins the Working Group.

Details regarding entries, invitations, junior showmanship qualifications, host hotels, and other information will be announced once finalized. For the latest updates visit westminsterkennelclub.org.

Purina Pro Plan® — Celebrating a decade as presenting sponsor of all Westminster events.

© Dog News. This article may not be reposted, reprinted, rewritten, excerpted or otherwise duplicated in any medium without the express written permission of the publisher.
Wed, 10/21/2020 - 11:07am