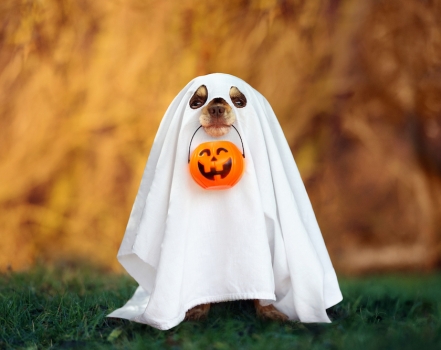 What's the scariest thing that’s ever happened to you?
By
Eugene Z. Zaphiris

Years ago I was traveling along the seawall in Biloxi, Mississippi, in my class-A RV. I was headed home from the dog show with a truck full of dogs, and there was block after block of heavy traffic both ways.

Patsy Wade (“PW”) applied the brakes for an upcoming red light, and there was NO braking! The road had a slight downward slope, and the RV just kept going, heading straight for two lanes of stopped cars, and nowhere to pull off.

As we approached each light, there was a right-turn lane, and PW would pull into it, horn blaring, warning people we could not stop or slow down. She would blast through each intersection, and by the grace of God missed all the cross traffic as well as stopped traffic.

The whole time I was kneeling beside PW at the steering wheel, saying here comes the right-turn lane or upcoming car across the road, always looking for some place we could pull over and safely stop.

Finally we saw a median on the right with sand and a restaurant sign, and she headed straight for that, expecting we would hit the sign before we stopped. But the sand did the trick.

Another terrifying moment was when that same RV caught fire while we were driving on I-10, again on our way home from shows. From the moment PW saw the gauges on the RV stop working and said, “We’ve got a problem,” the coach burned to the ground in seven minutes. We got 13 dogs, ourselves, emergency equipment and one bird safely out.

I still have nightmares about that one!

Early one morning almost two years ago, I was having my first cup of coffee, enjoying the peaceful time just before sunrise. I looked out the window to see a full-grown coyote standing right next to the pool fence. Two of my young LITTLE dogs saw it at the same time, and before I could get to the door, they were out through the open dog door in hot pursuit.

To this day I don’t remember how I got outside without the other dogs following me, chasing down the coyote, screaming non-stop “COYOTE!” and calling my two little dogs, who were less than a year old, by name, hoping they would respond. One did, and hightailed it back into the house. It was close to an hour before the other one finally poked her head out of the bushes and came to me, probably because by this time I was sobbing her name.

Two days later, in late morning, that same coyote was standing at the CLOSED dog door.

Fast-forward to the present. Our yard is completely fenced with eight-foot fencing, jail-yard lighting at night, air horns in hand, cameras everywhere, and all the dogs have learned to use the potty box before sunrise and after sunset.

A few years ago we were in Mexico for a judging assignment, and our hosts couldn't have made our trip any better – everything was great. We were dropped off at the airport, and while waiting for our flight home went to a mezzanine restaurant for a bite to eat.

All of a sudden, the building started rocking, glass started breaking, and people starting screaming and running. We were in a 7.1 earthquake. We dove under the table and stayed there till things calmed down. (We couldn't get out from under the table, so the waiters had to pull us out – so embarrassing.)

We ended up evacuating the building for a few hours and since no flights were leaving, slept on the floor of the terminal with hundreds of our new best friends. Our sister Fran was home and was able to get us a flight out first thing in the morning. To say we were terrified is an understatement.

One day I was home alone and heard a knock at the door. I opened it, thinking that it was a friend whom I was expecting. A man was in the doorway. He explained that his car had run out of gas, and he asked to come in and use my phone. It was, of course, prior to the days of cell phones. Before I could answer, he started to enter the house.

Suddenly I heard a roar behind me, and my Alaskan Malamute, Talky, came running in, and placed herself between me and the man. He turned around, ran down the driveway, and drove off in the car that had run out of gas. I was still shaking 10 minutes later.

The scariest thing that ever happened to me was running out of air scuba diving in Jamaica at 90 feet. I had to breathe off the air in my vest and come up very slowly.

My scariest mishap was of course related to a dog show. Judy Vanderlip and I were traveling back from a successful weekend at the Mission Circuit with my Cavalier. We were coming up Highway 5 at noon with absolutely no traffic, when a girl who was texting sideswiped my Sienna with Broderick in a crate in the back.

We ended up going through a fence into an orchard, and the van rolled several times. We were strapped in by the seatbelts and upside down. Luckily, a paramedic was behind us, and he pulled us and Broderick out through the window.

She answered: “You complained!”

The hospital checked us out and we were OK, with a couple bumps and bruises. Broderick came into the hospital and was walked by the nurses.

Well, it was quite the weekend, but we did come home in the ribbons!

By far the scariest thing that ever happened to me was when I was living in Virginia and renovating an antebellum house. I was kidnapped by one of the men who was doing the renovations. He threw me in the back of the trunk of his car and took me to a mountain cabin. Fortunately I was able to talk my way into his letting me go.

To this day if I’m walking along and a man approaches from the other direction, I will cross the street to avoid him.

This was very, very scary. I kept thinking while I was locked in the trunk how many people in this situation ever get to tell the tale.

It was the 1980s, when dog shows were in their heyday. Three of us decided to carpool to share travel expenses to attend the dog show in Ottumwa, Iowa.

I showed my Sheltie while the other two girls showed several of their dogs, including an Afghan, an Ibizan and a Lhasa Apso.

A great time was had by all, and we of course stayed to watch Best in Show like the majority of the other folks did. This naturally meant that as soon as BIS was awarded, everyone started loading their dogs and gear en mass into their cars and vans to get on the road before darkness fell. Pandemonium reigned as equipment and crates were laid out everywhere around the loading docks, and people quickly stowed them into their vehicles to make room for others waiting to load up.

We assembled our grooming tables, tack boxes and crates in the loading-dock area. Our driver and van owner pulled up, and the three of us were an efficient, speedy team loading everything into the van.

We pulled out of the show site heading for home as darkness began to fall, and started sharing our thoughts and impressions about the day’s show ... the BIS winner, the group winners, our respective breed winners, how well our dogs did.

The gal with the Lhasa Apso had had a particularly successful day showing her dog, Max. As she recounted the win, I looked to the back of the van to check on the dogs, and asked, “Where is Max, by the way? Did he go home with somebody else?”

Our driver didn’t miss a beat. Not a word was spoken as she immediately made the smoothest bat turn in the road and stepped down on the gas pedal to hightail us the 10 miles back to the show site.

When we pulled in, it was pitch dark, not a single vehicle outside, no lights on in the building, and the loading dock was empty.

Our hearts sank! Where was Max? What could have possibly happened to him?

Max’s owner found an unlocked door, but no Max anywhere on the first floor. We then started on the second floor. There, in a tiny office in the corner of the building, we met the custodian, who had carried Max up in his crate and was phoning his contacts to receive instructions on what he should do with the dog.

That was a real scare for all of us, and we could never go to another dog show together without first asking, “Where’s Max?”

Seeing Steve engulfed in flames as a result of a kitchen fire, 50 years ago.

This is not my story, but one told to me by Nellie Holland, one of Britain's premier breeders of Scottish Terriers.

Nellie was a city girl, so when she and her husband moved to their home in Yorkshire, it was the first time she experienced real darkness outside.

One night, as she walked her Scotties down a dark country lane, the dogs suddenly pulled forward on their leads and growled. It's a deep, throaty and intense sound, and it tells you that they see danger ahead. Nellie peered into the darkness, but saw nothing. She shook off her fear and slowly walked forward.

Suddenly, a misty white apparition appeared in the distance. The dogs were on full alert now, growling and moving back and forth. The sight completely terrified her, and she stood frozen as the apparition moved toward her in the dark.

Suddenly, she heard a sound from the thing – a deep, lowing "moo." The apparition turned out to be a black-and-white cow coming toward her and the dogs.

© Dog News. This article may not be reposted, reprinted, rewritten, excerpted or otherwise duplicated in any medium without the express written permission of the publisher.
Tue, 10/20/2020 - 8:45pm