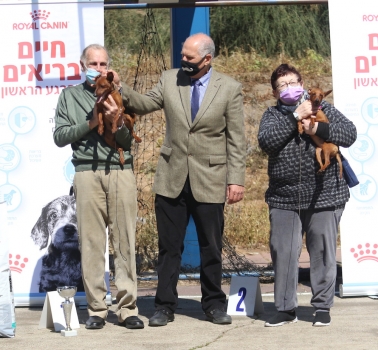 Story and photos by Yossi Guy

The Israeli Kennel Club (IKC) has been hit by the COVID-19 pandemic no less than many other countries. The Israeli government has imposed various lockdowns and other regulations that prevented all types of gatherings, including dog shows.

During some periods over the past year, people were allowed to gather in groups of five, 10 or 20. That made it extremely difficult to organize a show. Several breed clubs did manage to slip in a specialty show here and there between the different isolation periods – dividing the show into different breeds and requiring owners and handlers to remain off the show grounds when they were not actually showing – but since January 2020 there have been no all-breed international shows in Israel.

Dog owners have been yearning for shows, some because they wanted titles for their dogs and others because they longed to be with their fellow owners and breeders, missing the social aspect of shows.

“The Israeli Kennel Club board has deliberated this problem for months,” notes IKC president Doron Rachlin. “We tried to find ways to organize an all-breed international show under FCI regulations without breaching the national instructions.”

The kennel club had been trying to organize a show since last October, but lockdowns kept interfering. Rachlin asked Nataly Koifman, chairwoman of the show committee, to file for a permit in principle in a location where a show could be held. But no one was willing to host a show with approximately 800 dogs.

But where there’s a will, there’s a way. Israeli Kennel Club vice president Yochai Barak-Lifac notes that there was “constant pressure” from fanciers to hold a show, especially after the cancellation of a previous show to which foreign judges had been invited. “We wanted to return to some sort of routine.”

So the Israeli Kennel Club came up with the idea of dividing the show and delegating breed to organize and run their portion of it, in the same manner used for single-breed shows. The international show was divided into several locations on four different dates over the first two weekends in March, enabling the kennel club to meet the Israeli Ministry of Health’s requirements.

After several hours of consultation, the FCI gave permission to hold the show in this unusual format, with one condition: The breeds in each group had to be judged on the same day, even if the rings were in different locations. The IKC was not required to hold final group judging.

Understandably, some board members and clubs expressed doubts, Rachlin says. “Some clubs comprehended it would fall on their shoulders and were unhappy with that. We told them we could not get one large location, and that is why they had to organize the rings.

"Another problem was the recurring periods of lockdown. We planned to hold the show in January and had to postpone it. February was also under lockdown, and finally we ended up organizing the show in March.”

Due to the pent-up demand, the original entries were “over the top,” says Barak-Lifac, who organized the show behind the scenes: 1,080 dogs, which was higher than the average international-show entry in Israel before the pandemic. Then Israel – which is the world leader in vaccination, with more than half of its population already fully vaccinated – instituted its Green Passport program, referring to the document issued to those who are a week past their second coronavirus vaccination. As a result, the IKC was forced to require those attending the shows to be vaccinated, and, understandably, “this caused a lot of cancellations,” Barak-Lifac says. But when the Green Passport regulations were amended, the IKC allowed exhibitors to reverse their cancellations, “leading to just around 150 entries being finally cancelled.”

This author had the honor of judging at two sections of the show. On one of the dates, I was invited to judge retrievers at the last moment because it turned out the original judge was not vaccinated. This show was held in a gym. Only the dogs and owners being judged at a given time were allowed into the hall. The following day I judged at another venue, a large lawn, where there were three rings with different herding breeds. The previous week I visited a show in another location, an outdoor basketball court. 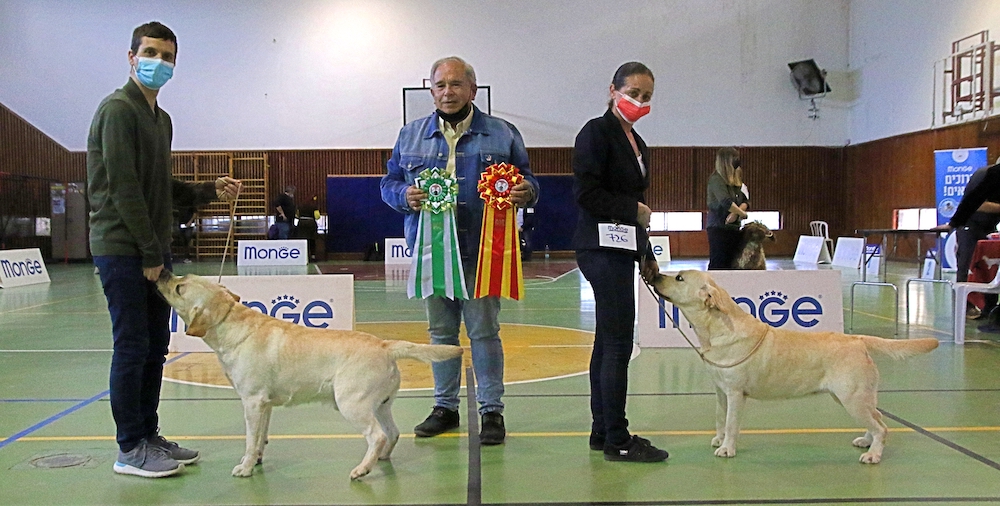 While the kennel club’s soon-to-be-replaced computer system led to some digital glitches, the final number of entries – more than 900 dogs – was "beyond all expectations,” Barak-Lifac enthuses. While there were the inevitable naysayers before the fact, “I was glad to see that all the pessimists discovered a much better reality than they had foreseen."

Adi Basson, a board member of the Israel Spitz Club, was involved in organizing the club's section of the show. Since her club is experienced at putting on shows and her board works well together, the logistics were not an issue at all. But more difficult was grappling with a sense of having a dog show that was not quite a dog show because of the social restrictions in place.

“On the one hand, there was a sense of independence when it comes to a show that provides international titles which we were able to organize separately,” she says, particularly since some other countries around the world had been able to conduct shows. “On the other hand, there was a sense of loneliness because we did not have the umbrella organization that should have organized it. I felt somewhat orphaned.”

For Basson, the fragmented format lacked the “glamour” of an international show, “the sense that you enter the gate, see the different booths and the fun and enthusiasm of international shows,” she says. “People who showed for the first time were not exposed to a normal international show. There was even no IKC booth to distribute fliers and explanations.” But what the show lacked in atmosphere it made up for in sportsmanship: Club members helped those who could not enter the ring because they were not yet vaccinated by handling their dogs for them. 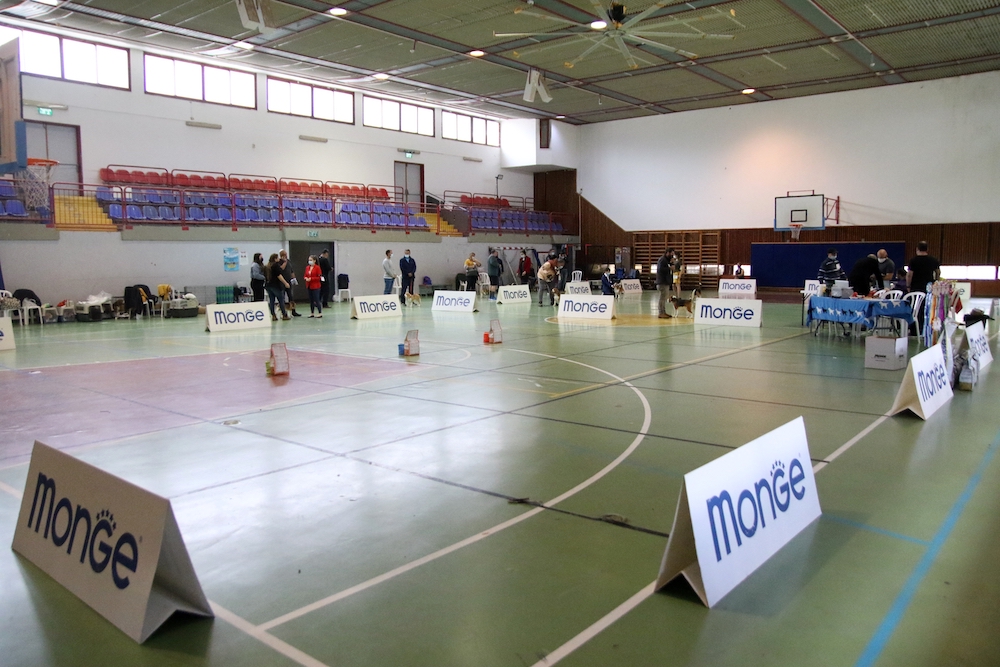 Another problem was the brucella virus scare, which has reached epidemic proportions among some breeds in Israel at the moment. “So at the show we tried to make sure our dogs did not go where others went, not to share the water bowl even if you see another dog that is thirsty,” Basson says. “I didn't know which virus would attack us and from where.”

Yair Vaknin, a leading breeder of St. Bernards, attended the show with his son, each handling a puppy. He too felt a disconnect in the absence of a social component at the show.

"It was not a real show," Vaknin says. "Both regarding the number of dogs, as well as the organization, it was just nothing. It lacked the atmosphere of a show. Many people didn't come due to the vaccinations. Some were not vaccinated, some did not feel like running with a mask, and there probably are a lot of people with financial problems. It was nice, because I managed to meet a couple of friends. It was the first time I brought dogs without bathing them before the show. I am not sure whether I will go to such a show again. If the previous format of shows returns, I will enter dogs." 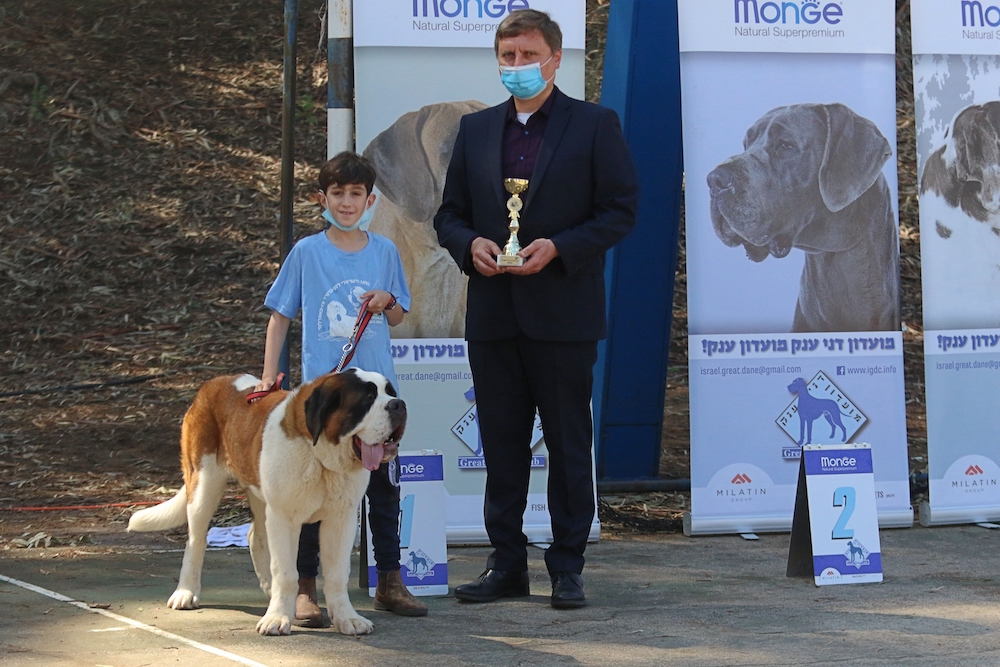 In the end, everything worked out, Rachlin says. “The clubs made some money from the show, the Kennel Club covered all its expenses, and in general people were satisfied.”

Barak-Lifac notes that the Israel Kennel Club is planning a traditionally organized all-breed international show in May that will include finals and groups, though the situation is still fluid. Currently, unvaccinated exhibitors can gain access to the venue if they pass a quick COVID test at the gate – but that could change at any moment, as could the green light for holding a show of that size, if there is a pandemic surge.

Should restrictions loom again this spring, the Israeli Kennel Club will be ready for them, as they have a proven template to follow.

"The clubs worked hard, and they profited from it,” Barak-Lifac says of its successful, if unorthodox international show. “Israel is among the very few European countries that have managed to hold an all-breed show in 2021, and we can be satisfied with that.”

© Dog News. This article may not be reposted, reprinted, rewritten, excerpted or otherwise duplicated in any medium without the express written permission of the publisher
Wed, 04/07/2021 - 4:07pm