The blankets and pillows on the couch are, in the dog's view, are mine, mine, mine.

… according to the dog, that is
By
M.J. Nelson

Unless you grew up with unusually permissive parents or guardians, there was without doubt a set of house rules by which you had to abide: Be home by X hour, pick up your toys, make your bed, clean up the messes you make.

In my home, there was one other rule: You catch or kill it, you clean it! Having cleaned her share of fish and pheasants, my mother was particularly adamant about this last rule, and as a result, any fish I caught, any ducks, geese, pheasants, quail or partridge I shot, I knew I’d eventually be scaling, plucking and cleaning. That rule applied to everyone else in the family, and even to family friends.

So, when it came time to set rules for my dogs, I naively thought the house rules I set for them would be just as clear and unequivocal as my mother’s no-cleaning rule. Yeah, right! The dogs’ interpretation of my house rules have frequently borne absolutely no resemblance to what I thought they meant.

A late friend of mine who was a retired FBI agent contended that he could read dogs’ minds. Since he had honed his mind-reading skills determining what people were thinking through two wars and some 30-plus years in law enforcement, it never entered my mind to question his stated ability to know what was on a dog’s mind. Even if I had, there was no way to prove or disprove the accuracy of his contention. While I’m often oblivious to a lot of things, I have noticed that the dogs seemed to operate under vastly different rules than humans, although I’ve never so much as pretended to have a clue as to what they might be thinking.

For example, I have always believed that when someone knocks on the door or rings the doorbell, I’m perfectly capable of determining whether to open the door and welcome them, tell them I’m not interested and send them away, or reach for the 9mm or the AR-15. But according to the dogs, I lack that ability. Because when there’s a knock or the doorbell rings, they have always raced for the door ahead of me, all the while barking at decibel levels that are close to those that will cause hearing loss.

The arrival of the garbage truck, the UPS/FedEx drivers or my brother’s dog sniffing around the front steps all constitute grave danger requiring maximum security precautions, according to the dog.

They apparently believe it is their duty to make it clear to whomever is on the other side of the door that if they try to enter without first getting both my and the dogs’ permission, more than an unpleasant encounter awaits them: They are as good as dead. The dogs leave no doubt that they don’t suffer fools and they don’t take prisoners.

This is despite the fact that all of my dogs have actually loved people, and my current Chesapeake views the entire human race as his friend. Even when it becomes obvious to the dogs that the person outside is OK and someone I welcome, they’re still not satisfied until after they’ve conducted a complete body search of that individual that would be ruled inappropriate under all but the most extreme circumstances by any court in the land, state or federal.

The dogs’ view of threats is also very different than mine. To me, a threat is someone trying to kick down the door. To the dogs, the furnace starting, frigid weather causing the tree limbs to crack or the wind blowing the leaves on the trees outside the office window are reason enough to sound the alarm. The arrival of the garbage truck, the UPS/FedEx drivers or my brother’s dog sniffing around the front steps all constitute grave danger requiring maximum-security precautions, according to the dogs. 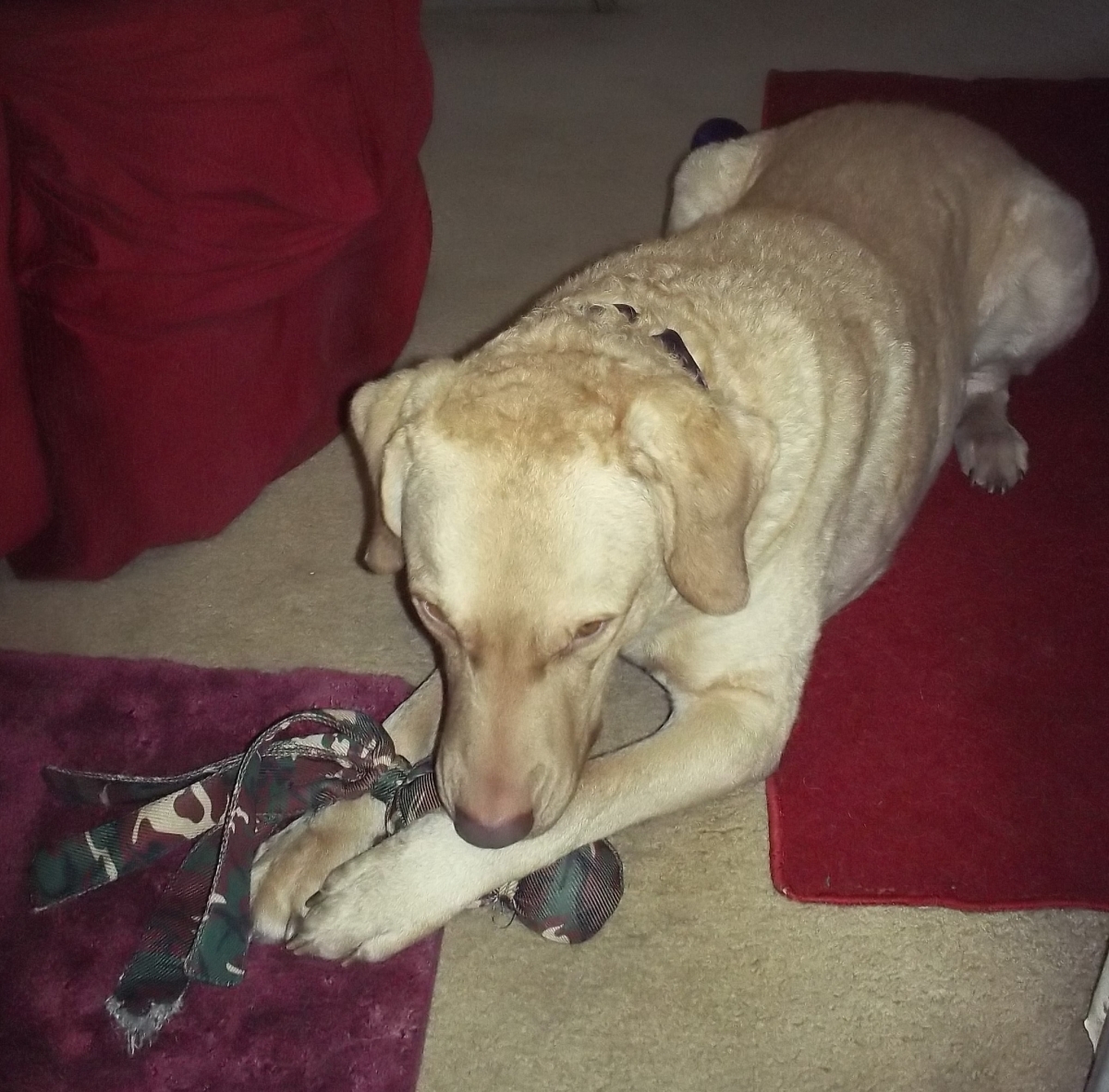 Everything in the house belongs to the dog – at least, that’s how he sees it.

It has never bothered me when my dogs keep company with other people. They are friendly animals and the people to whom they’ve paid attention have, for the most part, appreciated the gesture just as I’ve enjoyed watching the dogs interact with others. Ah, but let me come home with the scent of another dog on my clothing, and it’s instantly recrimination time. At its mildest, you get THE LOOK, which says in the most accusatory tones, “You’ve been with another dog!” It’s much like the reception a husband would get coming home with lipstick on his collar that wasn’t his wife’s shade or a wife greeting her husband with the scent of English Leather on her neck when all he ever wore was Old Spice. I had one dog who became so miffed when he detected that I’d been consorting with a strange dog that he would give me the cold shoulder for several hours, refusing to even acknowledge my presence in the room.

If the scent on my clothing happens to say “cat,” in the dog’s view, it’s fraternizing with the enemy, a court martial offense that, if I recall correctly, under either the United States Code or the Uniform Code of Military Justice, can be punishable by death should it rise to the level of treason. To the dogs, my having spent time with a cat came pretty close to meeting that threshold.

Despite the finest efforts by the pet food companies to make their foods appetizing, I’ve never been tempted to eat any of my dogs’ food. The same cannot be said, however, for the dogs’ view of my food. Their rule is that they must be given at least part of every meal or snack I eat. Should I ignore this rule or even be slow to comply, they reinforce their demand by drooling all over my trousers. They also believe there is a rule permitting them to use my pants or shirt as a napkin after meals or a trip to their water bowl.

“Mine” also includes any and all birds that have been shot by anyone in the hunting party.

There’s apparently an additional special rule, which seems to be inviolate, that they must rub their sedge and deadgrass colored coats or, when I also had Brittanys, their white-coated areas against my dress blues, depositing copious amounts of light-colored hair on the wool fabric, despite having been brushed earlier in the day. That not only makes for an unacceptable appearance but requires a major effort to remove.

Since my name is the one on the deed, I have always assumed that the house and its contents were mine. After all, I pay the taxes, pay for the maintenance, pay the housekeeper, shovel and sweep the snow off the front steps, know where the circuit breaker box and the key to the liquor cabinet are, and I know the combination for the safe. All of these would be considered fairly solid evidence that the house is mine. But they are meaningless as far as the dog (and all his canine predecessors) is concerned. In his rulebook, everything in the house is his. Toys, balls, sticks, shoes, bones, remote controls, leftovers, sofas, socks, beds, treats, and the blankets and pillows on the sofas or the bed are all, in his view, mine, mine, mine.

He also views any and all birds that may have been shot by anyone in the hunting party as his, although my brother’s Chesapeake frequently disputes his ownership claims. The “It’s mine” view even extends outdoors, encompassing the entire farm and, if my guess is correct, anywhere that he considers his territory. Which pretty much means a significant part of North America. 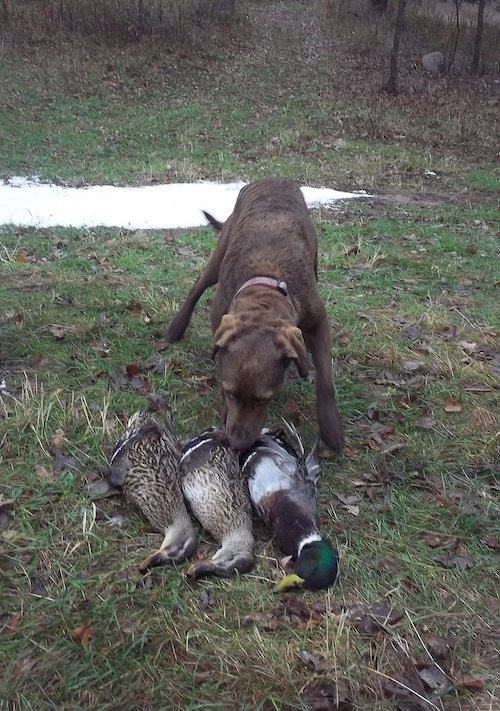 Along with the myth that I own the house, I apparently suffer under the delusion that a shower, getting dressed or a bathroom trip is a solo activity. Not true, according to all of my dogs over the years. Their version of the house rules is it’s their responsibility to oversee everything. The result is that it is impossible to leave a room without a canine escort who also usually insists on “walking point.” Just where they think ISIS has hidden improvised explosive devices on the tile floors between the office and the kitchen or the carpet covering the route through the living room from the office to the “head” is something I’ve never been able to figure out, but apparently the threat exists.

It’s also against the dog rules to close the door to the bathroom quickly enough to bar entrance to the canine patrol. If I should happen to be successful in so doing, my transgression of this rule is met by howls at volumes that make me fearful the neighbors will call for intervention by a SWAT team because someone next door is being tortured to death.

My daily routine, after the usual bathroom duties, begins with a trip to my office to check emails and the headlines. I make my living as a reporter, so it’s important that I keep up with what’s happening in the world. Once I’ve determined we’re not at war with anyone else, I begin work on whatever story has priority that day, planning to spend the rest of the day bringing that assignment to its conclusion or at least making substantial progress toward it.

The dog, however, like all his predecessors, has an entirely different outcome for the day in mind, and he employs every means possible to ensure that his is the one that prevails. My cousin has a shirt that says, “My plans for today: Let the dog out. Let the dog in. Let the dog out. Let the dog in” ad infinitum, which about sums up my dog’s daily plans. If I happen to be under pressure of a deadline, he believes the rules not only permit but require that he push his way under the desk and shove my chair away from the keyboard to demand being petted, ear scratched and played with, or that I go outdoors and shoot dummies for him to fetch, deadlines be damned. 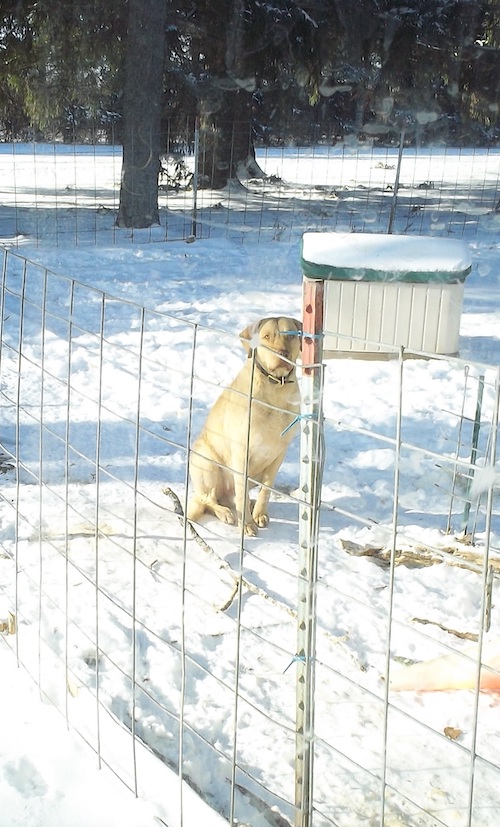 While my rules and the dogs’ rules are poles apart, there is one of their rules that I wish it were possible to adopt, and that’s their rule for dealing with stress. I deal with stress in a variety of ways, ranging from stomping around turning the air blue to taking a deep breath and a step back while also hitting the “play” button on the office stereo, making sure that what I’m going to hear is something like “Moonlight Sonata” and not “Ride of the Valkyries.”

None of my methods, however, are 100 percent effective. But the dogs have found a solution to stress. and their rule is wonderful in its simplicity: If something is bugging you or stressing you out and you can’t eat it or play with it, pee on it and walk away.

© Dog News. This article may not be reposted, reprinted, rewritten, excerpted or otherwise duplicated in any medium without the express written permission of the publisher.
Tue, 05/11/2021 - 12:58pm